A video game villain wants to be a hero and sets out to fulfill his dream, but his quest brings havoc to the whole arcade where he lives.

More than in most animated films, the art design and color palette of "Wreck-It Ralph" permit unlimited sets, costumes and rules, giving the movie tireless originality and different behavior in every different cyber world. Wreck-It Ralph, who seems not a million miles separate from Shrek, makes a lovable guide through this arcade universe.

I have a complaint, and it's my usual one: The whole movie comes down to an interminable high-velocity race and chase scene, perhaps timed to match the moment when the kids in the audience have consumed so much pop and candy they're having their own sugar rush. That can get old real fast for the adults, and heaven help those parents whose children insist on viewing the DVD over and over and over and over again. I suppose that goes with the territory

Trailer
posted by zinon (14 comments total) 3 users marked this as a favorite
I saw this over the summer and thought it was way more charming than I expected. Part of it is John C Reilly, who is the best at this kind of role. (He was great in the musical version of Paddy Chayefsky's "Marty", for instance.)
posted by rmd1023 at 10:29 AM on November 21, 2018 [1 favorite]

Disney commissioned real Fix-It Felix, Jr. arcade machines as part of the promotion of the movie and you'll still find them around in certain places. The annual arcade/pinball show in my area has had it for several years now. It's fun and really feels like an artifact from out of the past.
posted by Servo5678 at 10:47 AM on November 21, 2018 [2 favorites]

This movie made me so happy. It remains the best video-game movie I have ever seen, although they didn't have to jump to clear that bar. Possibly it is the first major motion picture made about video games by filmmakers who had grown up with them, who honestly liked and appreciated them and didn't just see them as IP licenses to squeeze money out of kids and idiots.

This probably is not unrelated to the fact that the chief games involved are invented, and the known games and characters are just cameos. I'll never see Zangief again without thinking, "You are bad guy, but you are not bad guy."
posted by Countess Elena at 10:55 AM on November 21, 2018 [12 favorites]

Finally just saw this the other day and it was just as cute and clever and smart as can be. Needed more maybe a bit more Joust and a few others. Perhaps a bit scarily prescient that video game characters could steal bits of code for their own personal benefit, should only be coding up programs that are good and kind socialist video sprites.... or we know how the alternative turns out.
posted by sammyo at 2:13 PM on November 21, 2018 [1 favorite]

I thought this movie was great and I am expecting to enjoy the sequel as well. Now, even more excited as there is a "Wreck-It Ralph" VR experience (based on the sequel)!

the known games and characters are just cameos.

Wow, yeah. Now that you pointed this out, it's TOTALLY part of why it works. None of this shoehorning things into place. And when you see the known characters, they're 'out of character', so they don't even have to try and match anything we see from them with game-lore for whatever game it is.
posted by rmd1023 at 5:52 AM on November 22, 2018 [2 favorites]

I only saw this once but I remember enjoying it and being surprised that it was a film that actually got video games, and referenced them in a knowing, loving way. It wasn't just "CG film + video game characters"; like the Lego Movie, it felt like it was made by people who enjoyed and understood the subject matter. Probably the best video-game film I've ever seen.

This movie made me so happy. It remains the best video-game movie I have ever seen, although they didn't have to jump to clear that bar. Possibly it is the first major motion picture made about video games by filmmakers who had grown up with them, who honestly liked and appreciated them and didn't just see them as IP licenses to squeeze money out of kids and idiot

It wasn't just "CG film + video game characters"; like the Lego Movie, it felt like it was made by people who enjoyed and understood the subject matter.

"Someone is wrong on the internet"

Um - I beg to disagree - the Lego Movie creators understood their subject matter perfectly - the stress between free "master builders", versus static "model builders". Heck - even down to the 80's space guy broken helmet.

Sure, there was "Lego Batman" thrown into the mix, but he wasn't the hero of the piece.

While I loved "Wreck-It-Ralph", it certainly didn't get me all misty-eyed at the father/son climactic resolution - which, surprisingly enough the Lego Movie did (and still does on re-watch).

No, no, I agree - "like the Lego Movie, it felt like it was made by people who enjoyed and understood the subject matter" :)
posted by EndsOfInvention at 7:23 AM on November 22, 2018 [1 favorite]

Good one guys, the way the industry is going we should soon see "Semicolon: the misunderstood" coming soon to a theater near you.
posted by sammyo at 9:07 AM on November 22, 2018 [5 favorites]

This is my son's favourite movie. He's five. I've watched it twice a week at least for an easy year or so. Probably longer. I can't even recall a time wherein I did not watch this damn movie twice a week.

I have small thoughts and Big Thoughts about this film:

First is that Calhoun needs the ability to swear. God, she tries, bless her, stuck in the PG film when her game is clearly at least an M. She needs it like breathing, like she needs armour that doesn't give her tits the size of her head. She's my fave, all the chick armour and princess rescuing and all that other baggage included.

Secondly, what the fuck, Nicelanders? How hard is it to not be a dick to your coworker for thirty odd years? I know you probably have a super limited intelligence given the 8bit nature of your game, but Cheesus Crust.

I also wonder about the whole dying outside your game thing. Has that never been an issue in like, the whole time gaming has been around? Do games just stop working because their characters are missing from time to time? It's just accepted in that world? And Jesus, who designed Hero's Duty with that gaping huge non-sentient aggressor problem? Every other game has almost uniformly sentient characters.

But those are small thoughts.

The Big Thought, the one that's a really ugly one, under what is otherwise a charming love letter to gaming, is that you should never defy your program. No room for growth, no change. Ralph defies years of literal abuse and ostracism to seek the acceptance of his peers and it literally nearly destroys his entire world - if the Cybugs had gotten loose, that would have been it for the arcade.

It makes sense for game characters, but for the viewer? My five year old watching that over and over and over? Not so great.
posted by Jilder at 1:57 AM on November 23, 2018 [3 favorites]

Calhoun as a parody of the hyper-badass "strong female character" from shooting games (complete with bizarre verbiage and almost-but-not-quite swears) this is for an *arcade* game, after all) was one of my favorite bits from my first viewing.
posted by Scattercat at 5:34 PM on November 25, 2018

Princess Vanellope's training montage is the best, and not just because it's set to Rhianna. That look on her face when she rediscovers herself and her skills is cathartic.
posted by whuppy at 12:22 PM on November 26, 2018 [1 favorite] 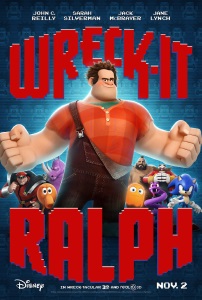