I just want to say, I love the show description. My last bout of giving up on Grey’s was when they blew up the operating theater because a patient failed to explain that he had put his wife’s hairspray in his colon, rather than the shampoo they believed to be there.
posted by loriginedumonde at 8:43 PM on January 24, 2019 [1 favorite]

I think the hairspray/colon disaster will, in fact, be the guiding metaphor of the season, which is that if you are dishonest about your desires they will explode, destroying you and harming others.

Also, I 100 percent believe that one guy is called "Linc" because someone on staff is playing Breath of the Wild and thinks the actor resembles Link.
posted by purpleclover at 10:57 PM on January 24, 2019

Well, Teddy is named Teddy Altman after the Young Avenger Teddy Altman because they were created by the same writer (I swear this is true) so anything is possible.
posted by colorblock sock at 11:13 PM on January 24, 2019 [2 favorites]

If this show ever wraps up they really should get Patrick Dempsey to return as an emergency patient that was injured by illicit bike racers and the last scene Grey is in the room, exhibits undeniable symptoms of Alzheimer's, Dr Shepard is able to get out a "we'll help you though it" as he passes away.
posted by sammyo at 5:49 AM on January 25, 2019

I'm kind of surprised they haven't had a helicopter fall on Seattle Grace Mercy Death yet.
posted by ApathyGirl at 10:12 AM on January 25, 2019

For many years, this show was remarkable, in that within an episode, the writing was always tight and thematically focused and the acting and direction were crackerjack competent. There were still many, many, many reasonable complaints a person could make about the show, but they were either just general nose wrinkling at the very idea of a big cast melodrama or, even more commonly, about how the show became ludicrous when you took a step back and considered combinations of its events in context with one another.

To put it plainly, this was a show that could give you a well-written and made episode on mass shootings, plane crashes, ferry crashes, bombs... but in order to enjoy those episodes, it was necessary that you willfully ignore the preposterousness of all of this happening to the same people/hospital. That was okay, though. It's a melodrama.

Over the last few seasons though, it's not just the forest that's looking bad, it's the trees, too. The writing within individual episodes is filled with questionable decisions, erratic character changes, muddled thematic underpinnings, and just general lousiness.

It seems like there is a life cycle for shows based on talent drain brought on by the regular luring away of their better writers. Add to that the compounding difficulty of coming up with new situations to inflict upon the characters of a melodrama after fifteen years and I just don't think they're holding it together anymore.

This is a kinda bad show now, even grading on the tv melodrama curve. Only our continued affection for the characters and sheer habit is keeping us on board.
posted by DirtyOldTown at 10:47 AM on January 25, 2019 [3 favorites]

Wasn't there some sort of helicopter accident on the roof? Oh only sort of, I'm conflating with ER.
posted by wellred at 10:48 AM on January 25, 2019

Yeah, it was a meta-commentary on the hackiness of this (and last) season's writing.
posted by ApathyGirl at 11:50 AM on January 25, 2019

Instead of a helicopter crash, they did have that gigantic fire in season 13 where that one dude blew up a chunk of the hospital.
posted by loriginedumonde at 12:29 PM on January 25, 2019

I was very late to the party with Grey's- jumping in around early season 9. Binging it all together and then watching since, it's really remarkable how intensely the quality dropped off somewhere around season 7 - 8. Oh sure, earlier seasons had their weird, weird stuff (lookin' at you Denny's ghost) and abysmal low points, but by-and-large, I echo ODT's sentiment. Grey's, at one point, was some top notch dramatic TV, with amazing musical direction to boot.

I've probably been reliably hate-watching since season 11 or so. What has been extra weird has been to see the odd run of 4 or 5 episodes here and there where it seems like it's reaching towards the old goodness, only to sink back into the dust, highlighting just how far it's fallen. Does anyone else remember that Bailey episode a season or two ago where she had to go treat a woman at a prison? The camera work was so shoddy in that episode that I thought there might be a gas leak.
posted by Krazor at 6:33 PM on January 25, 2019 [2 favorites]

Somewhere along the way typing that, I missed my point: this season has been bad, but in a lot of ways, I feel like it's consistently a little bit better than it has been in the last two or so. The newest crop of interns has been marginally more bearable than others past.
posted by Krazor at 6:37 PM on January 25, 2019 [1 favorite]

Hah, that sounds like a review of any modern season of Saturday Night Live.
posted by rhizome at 7:55 PM on January 25, 2019

Last night was one of those episodes that briefly achieves some of the old magic. This is almost cruel at this point as, were it not for scattered bits of quality like this one, we could otherwise quit this damned show entirely.
posted by DirtyOldTown at 1:53 PM on February 8, 2019

Something happened and not only does DeLuca look magically delicious to me (is Giacomo smizing all the time now?) but I am fully on board with MerLuca.
Also loving Teddy/Koracick because DAMN does she deserve something after the suckfest of Owen.
And next week is a clip show, to celebrate them beating ER, I guess? Yay?
posted by ApathyGirl at 2:12 PM on February 22, 2019

Q: Why do people still watch this show?
A: Because of episodes like the one that aired tonight.

Good oral history of the episode and hallway scene.
posted by ellieBOA at 3:23 AM on April 3, 2019

Ok - I am confused by our tragic cliff hanger here. Why didn’t they do the surgery pro bono to begin with? Alex has begged people to do kids surgeries and donate their time before. Why not make sure the Fox Foundation doesn’t have a program to cover this in the first place. Weber and Meredith literally own the hospital - wouldn’t they know the resources available to them through the foundation?

This seems like sloppy writing to me. I mean, you have to forgo all the tragedy and unlikely situations that everyone has been in for suspended disbelief for a show that has been on as long as it has - but come on. Insurance fraud instead of pro bono work just seems ... lazy.
posted by Suffocating Kitty at 7:11 PM on June 24, 2019 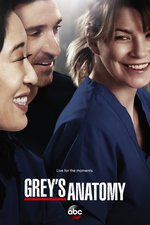