Comics Maya Erskine and Anna Konkle play versions of themselves as 13-year-old outcasts in middle school in the year 2000, surrounded by actual 13-year-olds.

The New Yorker: The Giddy Sexuality and Emotional Honesty of PEN15

Finally got around to watching this after seeing Erskine and Konkle on 'Late Show' - ended up sick-binging the whole thing today. Some of the arcs really went in directions that I didn't expect. Definitely left satisfied.

I remember liking 'Freaks & Geeks' and "My So-Called Life" but its been so long since I saw them. A recent show that I also thought dealt well with kids (aside from 'Stranger Things') was 'Cobra Kai.' Really looking forward to the second season of that.

This got kinda dark/ sad at the end. But so does life.

I'm in love with Anna Konkle and her cargo dress.

This was set 8 years later than when I was 13 and the "chatroom" story arc is somewhat bonkers to me, having grown up with BBSs and MUDs and IRL meetups. The AOL dialtone handshake sounded off, anachronistic, like really antiquated modems instead of 56k (or even the mundane 14.4k) that was common in 2000.

This was set 8 years later than when I was 13 and the "chatroom" story arc is somewhat bonkers to me, having grown up with BBSs and MUDs and IRL meetups. The AOL dialtone handshake sounded off, anachronistic, like really antiquated modems instead of 56k (or even the mundane 14.4k) that was common in 2000.

I want Maya to end up with Sam and kind of hate myself for it. But he's really sweet--he reminds me of the boys I heavily crushed upon in 7th grade. And also really stupid, like the mean revenge dating while also catfishing your crush. The third co-creator is named Sam. Is he supposed to be based on him? Seems odd.
posted by PhoBWanKenobi at 6:56 PM on February 10, 2019

I love love loved this show. I was in 7th grade in the year 2000. I’m Asian American. I never feel like I miss seeing myself represented until I see myself represented. This show was hysterical and weird and emotional for me to watch. I wasn’t nearly as wild in middle school but I could relate soooo much to these characters in their attachment to their best friend and all the emotional upheavals. I never rewatch shows but I may just have to with this.
posted by monologish at 9:28 PM on February 10, 2019 [5 favorites]

I...had a problem with mixing the adult leads with the teen actors. I couldn't get past the first episode. Like, when Maya confronted and shoved Justin -- with an adult and a child, it made me very uncomfortable. When I read about the premise, that the creators were playing their teen selves, I thought that was clever and interesting, and solves a few problems regarding the subject matter. Actually watching it, though, it totally didn't work for me.

As a late middle-aged man, I'm very far from the target audience, but that hasn't really been a problem for me in the past -- I find anecdotes and fictional narratives about middle-school girls very interesting and informative because that was the one moment in my life when I was maximally in a boyzone and the experience of the girls around me was a great mystery, not the least because I thought about girls and sex constantly.

I'm still friends with and in touch with the woman who was my first "girlfriend" in sixth grade -- but that period was distinctly innocent compared to when the hormones really kicked-in for me in seventh. For me, it was a huge change from one year to the next, and I recall 7th-9th only through a thick fog of mind-warping hormones. I can't overstate that, really: I recall it, and still have an emotional reaction to the memory, as feeling like I was not quite sane, that I was intoxicated. I resented it. It's super-interesting to me to learn about how other people, especially girls, experienced that life-change.

So I was excited about this, but the age-thing just kept screwing-up my suspension of disbelief and for some reason, also made me frequently uncomfortable. I think I would greatly have preferred it to be an animated series. Not unlike Big Mouth, but much better, as I think that show has merit in what it's trying to do, but often feels too Seth Meyers-ish, which to me is a very not-good quality -- I much prefer the approach and tone of PEN15.
posted by Ivan Fyodorovich at 12:13 AM on February 11, 2019 [2 favorites]

I saw a significant portion of an episode over my partner's shoulder, and didn't catch the age difference between the main and secondary actors! Now I'm wondering what's wrong with me...
posted by Anonymous Function at 9:48 AM on February 11, 2019 [2 favorites]

Anonymous Function - I'm not so sure about that, I think its a testament to Erskine and Konkle's physical acting ability (they're also not that much taller than the middleschool cast and... used chest binders?).

In particular, they dance and play like 13 year old girls. The thong episode also highlights their body language "code switching" (for lack of a better term).
posted by porpoise at 4:04 PM on February 11, 2019 [3 favorites]

Loved this show. I was around that age in the year 2000, and the music and fashions felt painfully correct. It's also one of the most accurate depictions I've seen of the uniquely horrible experience of being a 13-year-old girl.

I especially liked that the actors (other than the leads, obviously) actually looked like real 13 year olds -- where even the "cool" kids are still sporting puppy fat and bad skin and the first hints of facial hair -- instead of being played by impossibly gorgeous 17-year-olds. It's a super awkward age where you're half child, half teen, and you don't really see it on TV much.

I found the chatroom stuff pretty accurate -- I was much more online than most of my peers, but the lead characters' behavior was exactly what my classmates were up to around then, right down to the awwwful handles and Sugar Ray lyrics as an "away" message.
posted by retrograde at 7:46 PM on February 13, 2019 [2 favorites]

I've been working through this show. The lead actors/creators playing their younger selves threw me off for a bit, but it actually works really well. They both manage to pass as the gawky in-between humans and that's aided by the addition of real life gawky in-between human actors instead of your typical 20-30s mactors for this sort of thing. It's also set in a time period I can relate to, I hadn't realized how disconnected most highschool/middle school dramas were from my experiences since I'd never really seen one set in my era of childhood. As a contrast, I'm, also watching Schooled right now, which is set in the 90s-ish, but only barely feels like it, though I think a lot of that might have to do with whatever connection it has to Goldbergs.

Can't quite binge the show, it's got too much sympathy cringing and I need a break, not a knock against the show by any means.

It's also been funny to hear awful music from that era and interesting to note I was often "too good" for some of that shit back then, but by now it has a nostalgia factor that dulls whatever teen-superiority I had about it at the time.
posted by GoblinHoney at 3:08 PM on February 14, 2019 [1 favorite]

I tried it yesterday and couldn't get past the adults-pretending-to-be-middle-schoolers thing. Not just adults, but Maya Erskine is 31! Wet Hot American Summer did the same thing with adults pretending to be teenagers, but at least then the other teenagers were played by other adults. If they'd cast this show so that the whole middle school was adults or even young adults, okay. But this show wants me to be fine with watching fully adult women being paired up with actual children for flirting/chemistry/romance/. No. No no no no. I just don't understand why anyone thought it was a good idea.
posted by aabbbiee at 1:34 PM on February 22, 2019

I just binged this and I loved it. The adult women playing the leads against actual children totally worked for me, I was cracking up immediately. I think the other kids being actual kids (instead of CW hot 20-year-old 'kids') helps remind us how young, fragile, and stupid everyone was at that age. Like, the 'mean girl' who tormented 7th grade was really just another dumb little kid.

Having adults play the leads also allows them to get into the filthy shit kids did back then when hormones ruled your days. It's definitely akin to Big Mouth, without the cartoon surreality, and with a greater focus on girl hormone madness. I laughed so hard during the Wild Things-inspired hook up, because of the cutting back and forth between the soft-faced boy child and the grown-ass stubbly-faced man kissing double. It really helped emphasize how gross the stabby-tongued slobbery kissing was, too!
posted by lovecrafty at 8:26 PM on February 27, 2019 [4 favorites]

That was a real pleasant surprise; I was in 7th grade for the 99-2000 school year; although my experiences were a bit different than theirs (male, working class catholic grade school in the city), there were still parts that rang true.

There were several scenes where Maya's behavior was cringey (mainly the episode where Anna stays with them for a couple days) but I don't doubt that the behavior was common, god I hope I wasn't ever that much of a brat :P

I too, really appreciated using actors (excluding maya and anna) that were of that particular age; casting actors older than their roles was a big pet peeve of mine, even when I was a tween.
Despite Maya and anna's age difference, I was able to suspend disbelief (which is usually very difficult for me) for them; mostly because of their great acting not to mention the wardrobe and makeup.
posted by fizzix at 2:57 PM on March 10, 2019 [1 favorite]

This is one of the rare shows I don't want to binge watch, but I'm savoring it. Not always enjoying but it's definitely cathartic. I was in 7th grade in 2000-2001, and the clothes, hair, makeup, accessories, everything is spot on. (Though I remember playing Spice Girls earlier, in elementary school when there were too many girls who wanted to be in a girl band so we had two competing ones...I was in the one with the misfits.) I'm still not done watching yet, but the thong episode fucked. me. up. The way the cool girls did their politicking and fawning over the one pretty girl, while clearly marking an in- and out-group, was so familiar it made my skin crawl. Those child actors got the inflections just right. I remember the saccharine sweetness while at the same time you just know they hate you and are cutting you down for fun, but there's nothing you can do because everyone's being "nice."

I think it actually helps to have the main characters (cough cough self-insert cough) played by adults my age. Yes, they're reliving this horrible time and making horrible decisions and feeling all the things sooo intensely, but they really did get through it already. So they're going to be okay. Knowing they're adults portraying it helps me remember I got through it too and it's over, in spite of the anxiety I feel when I see them acting dumb.

But I also need to change my locks or something because clearly Anna and Maya broke into my house and read my diaries from 1999-2002 when they were creating material for the show.
posted by j.r at 9:55 PM on March 28, 2019 [2 favorites] 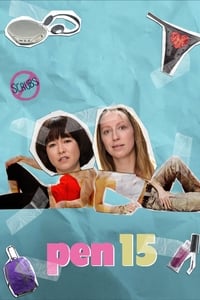