At a crumbling arctic meteorological station, two men work in isolation taking readings and reporting them over the radio. Pavel is young and unfocussed, naturally resentful of the older, grumpier Sergei. Bored senseless waiting for the job to be over, Pavel is unprepared for the test of his character that arrives instead.


"I would never intentionally put elements of parable into my story," Popogrebsky has said. "However, if the story grows beyond the concrete time and place in which it is set, and if it strikes some universal or personal chord in a viewer, for me this means that my mission has been accomplished." I find it impossible, in the film's complex moral resolution, not to see Sergei and Pavel as representing different sides of Putin's Russia, one shaped by older traditional ways, the other struggling to discover a new set of values. -- Philip French, The Guardian.

Above all “How I Ended This Summer” is a merciless contemplation of the fragile human psyche under siege. -- Stephen Holden, New York Times

This movie is currently available on Amazon Prime, along with the director's earlier film Roads to Koktobel (which I haven't seen but looks grim.)
posted by fleacircus (4 comments total) 2 users marked this as a favorite
Oh, hey, I've watched this movie. It's quite good! Although it has a lousy title which caused me to forget which movie it was for a moment.

It's a really pared down film, only two main characters, but it doesn't drag or feel gimmicky at all and the generational aspect of the conflict is nicely handled, clear, but not overdone. I enjoyed the ambiguity involved, where the motivations weren't spelled out in explicit personal detail, just a part of the story that unfolds and allowed to set the mood for what follows, leaving the viewer in a place similar to Pavel not fully knowing what's happening or what will come next. Film Movement, the company that released the DVD has a lot of good movies on its label. Worth picking almost any of them up if you see them for resale.
posted by gusottertrout at 5:50 AM on February 18, 2019 [2 favorites]

This film is such a great psychological drama. I saw it at the Atlantic Film Festival in Halifax back when it was released and I've been thinking and telling people about it ever since. I'm glad to see it's getting a new streaming life as it certainly deserves a wider audience.
posted by Flashman at 8:54 AM on February 18, 2019

The ending didn't quite work for me, but not enough to bring down the rest of the movie.

It's a pretty simple story but (IMHO) is told pretty well. It has an interesting loop of, "What is this character doing? Why is he doing that? What's going to happen?" that is strong and opaque because the landscape is strange and Pavel is such a doofus. The scene where Pavel first wants to give the information to Sergei, but the immediate reasons he can't quite do it, is good stuff in terms of like pure basic drama.

And when The Thing happens at the isotope beacon I made a sound like NNOAAAUGH.

This movie made good use of a highly specific thing I like: significant objects seen from a distance. First of all it's just visually interesting and tickles my sense of distance and time. (I'd probably love to see a long take that was just a character walking towards a town or a house, just the transition from traveling to being somewhere.) In this movie it's the polar bear and Sergei on a boat which activate the realistic feelings of, WELP TIME TO GO, though in the case of Sergei it's not entirely clear how much Sergei still wants to kill Pavel at that point. Like all of Pavel's moments of stupidity, it's a little bit understandable.

I don't really feel like this movie is a game of cat and mouse, or a battle of wills, or "a merciless contemplation of the fragile human psyche under siege". To me it is about just how dumb people are, the capacity for just sheer stupidity, especially in inexperienced people, and the need for patience and understanding. The movie posters make it look like some kind of survival action movie, but I feel like a much more representative picture is Pavel sitting in the barrel looking confused, after he put himself there like waste or trash.
posted by fleacircus at 6:50 PM on February 18, 2019 [2 favorites]

I don't really feel like this movie is a game of cat and mouse, or a battle of wills, or "a merciless contemplation of the fragile human psyche under siege". To me it is about just how dumb people are, the capacity for just sheer stupidity, especially in inexperienced people, and the need for patience and understanding.

Yeah, I think that's pretty spot on, though I'd say more how disconnected people are from each other and the world than dumb per se. There may be some of the latter in the former, but it feels more like it was suggesting we just are purposefully isolating ourselves and are uncomprehending when there is a break down resulting from that.
posted by gusottertrout at 10:29 PM on February 18, 2019 [2 favorites] 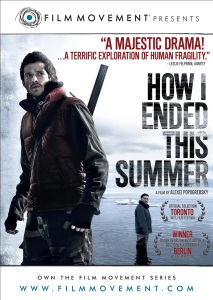