A murdered man is reincarnated as a housefly and seeks to avenge his death. (Note: this bilingual Tamil/Telugu film is available to stream in the US on Netflix in its Hindi-dubbed version as Makkhi.)
posted by DirtyOldTown (8 comments total) 2 users marked this as a favorite
This is from the director of the Baahubali films, but it's closer in spirit to the lunatic sci-fi creativity of Robot (Enthiran). Actually, as a shorter, tighter film, it's probably a better example of said niche. If you've idly browsed some of the Indian stuff I've been posting and wondered if you should jump in, this might be one of the better films to start with.

This is wicked fun. Not only is Jani reincarnated as a housefly, but he freaking stays one and still rekindles his relationship with Bindu. There is no magic restoration of his human self. And when Bindu uses her micro artist skills to outfit Jani with protective headgear and weapons? WOW. It makes for a really odd little story when she jumps right into helping him kill Sudeep. Sudeep (the actor, also playing a Sudeep) gets to chew the scenery in hilarious fashion as Jani tortures him.
posted by DirtyOldTown at 9:13 AM on February 26, 2019 [1 favorite]

I only wish the first thirtyish minutes didn't drag as much. Fly-Nani is great fun, Nani-Nani not so much, even the relationship with Bindu seemed better post-fly. On the other hand, it is pretty cool how much more I was drawn into the story once it completely bugged out. I mean when they manage to make a scene with a fly literally spelling out his plans on a car windshield seem an exciting and dramatic way to go to intermission you know they're doing something right.

I just finished Rajamouli's Yamadonga the other day as well and it's also a lot of fun, in a similar way, if you can get into the mythic side as it features a rogue battling Yama, the God of Death, for the right to rule Hell with a dance off (including a CGI'd special appearance that requires a bit of knowledge of Indian film history to fully appreciate) among other things. After seeing Eega, the Baahubalis, and Yamadonga, Rajamouli's women are still a bit of a problem, or how he handles the relationships between men and women anyway, but he's got a major talent for storytelling.

The quasi-religious element or mythic parts of the films are pretty interesting too for all three. The questioning Sudeep goes through over the possibility of flies being able to seek vengeance, or reincarnation tied to the behaviors he and Nani showed at the start of the movie is fascinating, suggesting as it does some continuing sense of Rajamouli being interested in the idea of death and rebirth of sorts in how his heroes come to understand their place in the world. In Baahubali, it was through the son being identical to the father yet finding the path to success, in Eega it's Nani becoming fly-Nani, and Yamadonga has it's own take. I'm definitely going to be looking for more of Rajamouli's films to see what else he's got going.
posted by gusottertrout at 9:39 AM on February 26, 2019

I only wish the first thirtyish minutes didn't drag as much.

Really? I was never bored. I've come to accept the extended series of scenes about the couple before stuff happens section of Indian films as a thing, and this was one of the more tolerable and even enjoyable such segments I have seen. Nani (Jani in the Hindi dub on Netflix) was delightful. His infinite patience as he wooed the shy and introverted Bindu was a treat, a sort of non-aggressive, respectful of the woman's space kind of rewrite of the normal against all odds courting process. He really threaded the needle between giving her the space she needed and not giving up, while still giving her plentiful opportunity to nope on out if he was reading her wrong.

The only thing I found truly weird about how they handled Bindu was that she was at no point afforded the opportunity to consider whether her love being reincarnated as a fly was a deal breaker. I mean: he's a bug.
posted by DirtyOldTown at 12:10 PM on February 26, 2019

Oh, I'm fine with the general set up of having extended character scenes to open the movies, I thought thought Nani was a dullard and the relationship with Bindu never managed to show any spark at all. Whether you chalk that up to the writing, to Nani the actor or some lack of chemistry between him and Samantha Ruth Prabhu is hard to say, but the Nani scenes did nothing for me.

I'd like to argue that they even set up a slight parallel between Nani and Sudeep's wooing styles as they both are boorish in their attempts in much the same ways at first, both using donations to Bindu's organization to get close to her, even with a similar numerical amount for donation, of exponentially different scales, but there isn't enough there to hold to that for the way it played out in the end.

On the other hand, I didn't mind so much Bindu sticking with Nani-fly in the end because Nani-not was so boring. She traded up! That must be why he came back again to fly form rather than human or something else.

That's all minor stuff though, the movie didn't really disappoint in any major way, with some of the action and choices being really top notch and unexpected, more than making up for a little slowness at the start.
posted by gusottertrout at 5:01 PM on February 26, 2019

I thought there was a world of difference between Nani/Jani and Sudeep's approach. Nani/Jani tried to find where the line he should not cross was and hover safely on the right side of there, so that he didn't violate Bindu's space but could make himself perpetually available because he felt strongly she was giving him signals, BUT he always left her the room and opportunity to say no. Sudeep, by contrast, insinuated himself into her life in a way that consciously tried to slink past her defenses, that tried to fast forward past her opportunity to consent.

For my money, Nani/Jani is a badly needed corrective to the romantic comedy trope of the quirkily persistent suitor. He was one of the best parts of the movie.
posted by DirtyOldTown at 7:40 PM on February 26, 2019

Oh, sure, there is a difference, I mean Sudeep is willing to kill for what he wants and Nani is just a low level stalker type, but the basic outline has some similarities if they had chosen to pursue it. But they don't of course, having Bindu simply say she was playing "hard to get" for two years of Nani going into her place of work and demanding attention she didn't outwardly show she was interested in receiving and Nani finding any excuse for Bindu seeming to shun him as being proof of some secret care for him instead, which they show as actually being the case.

It's all just a problem with the trope. Here they played it lower key, which has some advantage I suppose in demonstrating less direct harassment, but it also makes it less of an exaggeration, as is the more common choice for some comedies, which at least has some slight possibility of being seen as a metaphor used in condensing the narrative to show the ups and downs of initiating a relationship. That's a weak thing at best, but sometimes it can sorta make sense once you grudgingly accept that the women simply aren't going to get the same kind of attention and motivations as the men. None of it is great, but it isn't something that really sets Eega apart from other movies either. My complaint was more simply one of enjoyment, where exaggerating effect can at least give some pleasure of personality or incident that Nani's wooing lacked for me.

(Maybe of slight interest or comparison is to Rowdy Rathore, which is "quoted" in the end Fly-Nani dance number. There are a number of problems with how women are portrayed in that movie too, but there at least they hedge things a bit by first showing a ridiculous method of wooing that plays as straight, but they then have the woman deny it actually worked as it was shown, going for the popular have your cake and eat it too method.)

Anyway, the more interesting thing about Bindu, for me, was what you brought up earlier, her ready conversion to kill happy. It vaguely reminds me of Sana using Chitti to cheat on her exams in Enthiran, an unexpected choice for the character as so often women are shown as morally pure forces that seek to tame the men from acts that would fall outside social convention. While it makes Bindu and Sana more interesting in one sense, it, unfortunately, doesn't seem to come from anywhere or, in Bindu's case, lead to anything. (I could see a different argument for Enthiran's Sana.) It just happens because it's kinda wild and makes the plot a more unexpected one. It does though also sort of suggest the underlying motivation of Nani seeking to kill Sudeep to protect Bindu isn't really driving the vengeance at that point, with it then seeming at least as much a desire to kill because Nani was killed or just because Sudeep deserves it. Which is interesting in its own way, but different than the initial motivation. By that time the movie had started to really go off on its own though as mystic ceremony and possessed sparrows would shortly after make even more evident.
posted by gusottertrout at 11:30 PM on February 26, 2019 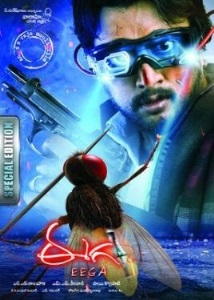