Humanity has nearly destroyed its world through global warming, but now an even greater evil lurks. The indigenous people of North America are being hunted and harvested for their bone marrow, which carries the key to recovering something the rest of the population has lost: the ability to dream. In this dark world, Frenchie and his companions struggle to survive as they make their way up north to the old lands. For now, survival means staying hidden - but what they don't know is that one of them holds the secret to defeating the marrow thieves.


"The Marrow Thieves is speculative fiction with a chilling immediacy. Its unflinching narrative resonates in our disturbing times. Cherie Dimaline’s exceptional writing and authentic characters pull you into a story that lingers and unsettles." – Governor General's Literary Awards peer assessment committee

“Though the novel tackles some heavy subject matter, The Marrow Thieves feels lighter as a result of Dimaline’s graceful, almost fragile, prose. Dimaline thrusts readers into the complex lives of rich and nuanced characters forced to navigate a world that too closely resembles our own. At first glance, the book appears to be dystopian fiction swarming with adventure and danger; however, readers with an interest in social justice and a grasp on colonial history will extract much deeper meaning. The book is, above all, a cautionary tale, revealing an exaggerated version of what could happen to Earth in the not‐so‐distant future. It is a timely and necessary read referencing pipelines, melting northern territories, rising water levels, and the consequences of government policies that don’t protect the environment. Powerful and endlessly smart, it’s a crucial work of fiction for people of all ages.” – Jessica Rose, Quill & Quire

This is the first discussion thread in what is proposed to be an ongoing series of Indigenous books. If you have suggestions for future reads, please check out the FanFare Talk post about the club.
posted by jacquilynne (5 comments total)
This is on the longlist for next year's Garden State YA Book Awards. As one of the volunteer librarians I was assigned this book to read, and am so glad that happened because I really enjoyed it. Am looking forward to seeing what other people thought - I don't want to post spoilers or anything.
posted by lyssabee at 8:42 AM on March 1, 2019

There's no reason not to post spoilers here! The posting of the discussion isn't the kickoff to a month in which people will read the book. It is more like the holding of a book club meeting in real life -- people should show up having already read the book. It's fine if people who are only part way through want to come join the conversation, but there will by necessity be spoilers in the conversation.

Here's a brief initial thought: (or not so brief as it turned out)

One of the things I spent a lot of time thinking about was the exact time frame of the book. How far in the future were these events supposed to be taking place? Assuming the lack of dreaming came on right around now, how quickly would our society degenerate into what was happening in the book?

It was obviously not meant to be some deep future. The offhand references to current brands and products made it clear that they weren't that far outside the realm of the things we know now. Then about the three quarter mark of the book, Frenchie sees his mother's health card, which was issued in 2049. You have to figure the events are happening a few years past that date, but not decades and decades, so it kind of settles the timeline as being mid-to-late this century.

It constantly feels like we're not all that far down the road from some precipitating event cracking up the world as I know it. The high potential for human cruelty to other humans feels even more stark here than it did in, say, Handmaid's Tale, because you barely have to go back into history to find Canadians treating indigenous peoples almost this poorly. In fact, you don't even have to go back into history to find some rather genocidal leanings -- there are reports of forced sterilizations for First Nations women in the past year.
posted by jacquilynne at 9:30 AM on March 1, 2019 [2 favorites]

I did a quick read of this while traveling. I enjoyed it and thought it was a great book to kick off the book club--a YA that was adventurous and had a hopeful ending, but also one that had history, culture, and some heavy political and environmental warnings woven in.

I grew up in North Carolina, where there were (and are) a lot of Native tribes. Can I name them? No. Do I know their history? Not really. I (if possible) know even less about Canada, the indigenous people who lived and live in that region, and the history of those tribes. Because of that, I really enjoyed reading about the terrain and the bits of information that I absorbed while reading the book.

I agree that the violence and circumstances surrounding the plot were pretty believable, although sometimes I wanted to know more--I would love a book following Frenchie's dad, for instance. Then again a lot of what made the book easy to read (both as someone who had a tight deadline and not a lot context) for me was Frenchie's young perspective--he knows the weight of his culture, but he doesn't know all of the history and he's very much learning and growing throughout the book.
posted by lucy.jakobs at 7:14 AM on March 4, 2019 [1 favorite]

I'm reading Tanya Talaga's Seven Fallen Feathers right now, it's a non-fiction book about missing and murdered Indigenous youth in Thunder Bay Ontario. Early in the book, she explains that seven is an important number in Anishnaabe culture and walks through the Prophecy of the Seven Fires.

The prophecy traces the history of the Anishnaabe through contact with Europeans and how things will go wrong, and people will turn their back on the traditional way of living, but in the seventh fire, after the world has been so poisoned that people are struggling to live, new Indigenous leaders will emerge and go back to the old ways and help the Earth as a whole survive, but if they failed, then everyone would fail.

When I read that, it really tied together this book with Waubgeshig Rice's Moon of the Crusted Snow. Both are near future dystopias in which people are forced to return to the land and the old ways, and that return to the land is the only way forward. I had recognized a certain commonality between the two stories, but didn't know until I read about Talaga's retelling of the Seven Fires that the commonality reflects a larger understanding in Anishnaabe culture that this is truly the future.
posted by jacquilynne at 8:09 AM on March 4, 2019 [4 favorites]

I read this a couple of weeks ago. I don't read a lot of YA books, but I thought this was excellent. The author does a great job of balancing between being almost believably disturbing on one hand and yet exciting and finally hopeful on the other.
posted by homunculus at 2:49 PM on June 18, 2019 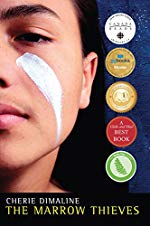