A fascinating Jazz Age tale of chemistry and detection, poison and murder, The Poisoner's Handbook is a page-turning account of a forgotten era. In early twentieth-century New York, poisons offered an easy path to the perfect crime. Science had no place in the Tammany Hall-controlled coroner's office, and corruption ran rampant. However, with the appointment of chief medical examiner Charles Norris in 1918, the poison game changed forever. Together with toxicologist Alexander Gettler, the duo set the justice system on fire with their trailblazing scientific detective work, triumphing over seemingly unbeatable odds to become the pioneers of forensic chemistry and the gatekeepers of justice.

PBS turned this book into an episode of "American Experience" interestingly enough, but the book itself is a fascinating look into a time when people were just as inventive when it came to murdering each other as they are now, but there was much less anyone could do to stop that. This is essentially the story of how modern forensics came to be.
posted by Homo neanderthalensis (8 comments total) 6 users marked this as a favorite
So this is an older book but It's one of my favorites, I re-read it every year when I need something to refresh the brain. Poison is one of the oldest methods of murder, besides bashing someone on the head with a rock, and for a very long time, it was all but undetectable. Oh sure someone dying clutching their throat after eating a pie their wife baked for them is suspicious as hell- but what about someone getting progressively sicker and sicker and there being no discernible cause? Arsenic poisoning can be so slow and deliberate and seem just like someone having worse and worse gastro symptoms... especially in a world and time where water and milk isn't so safe, so there is a plausible non-poison reason for the illness. There's a reason Arsenic used to be called 'inheritance powder'. Norris and Gettler invented forensics and because of their work, poisoning deaths are not so undetectable anymore. The book intersects with the poisons of prohibition too- that horrible time when in a horrible attempt to legislate morality the government would poison industrial alcohol and then had the gall to act surprised when people started to die. It's a good book about a time not so long ago when the rules of murder began to change.
posted by Homo neanderthalensis at 2:47 PM on March 11, 2019 [2 favorites]

H. neanderthalensis - you might enjoy The Corpse Reader which is a fictionalized account of Song Ci and his Collected Cases of Injustice Rectified.
posted by porpoise at 4:32 PM on March 11, 2019 [3 favorites]

That sounds fascinating, thank you for the recommendation porpoise!
posted by Homo neanderthalensis at 4:40 PM on March 11, 2019 [3 favorites]

I also loved this book, and have read it more than once. I thought some of the saddest stories in the book were cases of accidental poisoning; overdoses of patent medicines and the like. I remember one in particular where a couple was found dead in an apartment where the landlords had sprayed for bugs. My memory is starting to fade - I should reread it! Blum also writes a fair bit about the new modern chemical industry and the dangers it poses (including a chapter on the radium girls). I also wanted to note that she has a new book out, but I haven't read it yet; it's loaded up in my Audible queue right now. It's called the Poison Squad, and it's about the beginning of food safety regulation in the US, so she's obviously returning to the same well for more great stories!
posted by backwards compatible at 4:42 AM on March 12, 2019 [1 favorite]

Oh! Thanks so much for telling me about the new book, backwards compatible!
posted by Homo neanderthalensis at 11:03 AM on March 12, 2019

This book is so great. Poisoning is such a weirdly perfect angle for exploring both prohibition and New York in the twenties, and Blum does it beautifully.
posted by LadyNibbler at 3:33 PM on March 12, 2019 [1 favorite]

Thanks for starting this series, I must track this down.

A couple of years ago we visited The Poison Garden, a very special sub-area of Alnwick Garden in Northumberland, ASFAIK it started as an interest\tourist draw but now has a somewhat preachy anti-drugs approach.

I also recently found the soon-to-be-dead! webpage of the first Warden of the Poison Garden.

It was quite a memorable tour as our guide was a former police pathologist. Someone asked them if they could sniff a plant that was caged well back from nasal reach "you could but you'd only do it once..."
posted by unearthed at 12:47 AM on March 14, 2019 [1 favorite]

I have a copy of this but haven’t gotten to it yet. Looks like I need to move it up to the top of my TBR pile! Thanks for the reminder—this sounds like a book I will love!
posted by bookmammal at 12:11 PM on March 15, 2019 [1 favorite] 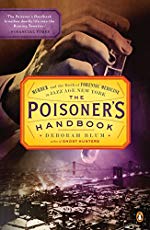