First patented in 1856, baking powder sparked a classic American struggle for business supremacy. For nearly a century, brands battled to win loyal consumers for the new leavening miracle, transforming American commerce and advertising even as they touched off a chemical revolution in the world's kitchens. Linda Civitello chronicles the titanic struggle that reshaped America's diet and rewrote its recipes.


Presidents and robber barons, bare-knuckle litigation and bold-faced bribery, competing formulas and ruthless pricing--Civitello shows how hundreds of companies sought market control, focusing on the big four of Rumford, Calumet, Clabber Girl, and the once-popular brand Royal.She also tells the war's untold stories, from Royal's claims that its competitors sold poison, to the Ku Klux Klan's campaign against Clabber Girl and its German Catholic owners. Exhaustively researched and rich with detail, Baking Powder Wars is the forgotten story of how a dawning industry raised Cain--and cakes, cookies, muffins, pancakes, donuts, and biscuits.
posted by Homo neanderthalensis (1 comment total) 3 users marked this as a favorite
Was a fpp a little bit ago. It's astonishing how complicated the story behind such a basic ingredient can be- and how entwined with capitalism and marketing it became. Also detailed in this book, how a woman's place might have been in the kitchen for many of the men making these products, but how they believed they knew best about the ingredients that they used. You'll never look at baking powder the same way again.
posted by Homo neanderthalensis at 3:39 PM on March 15, 2019 [1 favorite] 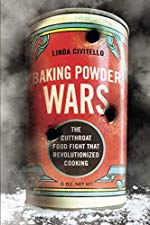