Nick Allen: “The Dawn Wall” is basically an adventure of ambition and obsession in nature worthy of a Werner Herzog film. But without being blasphemous, “The Dawn Wall” directors Josh Lowell and Peter Mortimer do it better than Herzog could have done, specifically because of how “The Dawn Wall” shines for having the intimacy of a first-person perspective instead of that of a curious outsider’s. The value of friendship and hard work goes beyond just Tommy and Kevin but to the filmmakers, who we can see in only select moments also on the mountain, hanging off the side of the Dawn Wall in what becomes their obsession, too.

Danielle Solzman: With his life in shambles, Tommy needed a new direction in his life. This led to what else but the Dawn Wall of El Capitan. Climbing these walls aren’t easy as conditions can be horrendous–all one has to do is look at what it takes to climb a mountain like Mount Everest. Even though this isn’t Everest, conditions can be just as terrible. All it takes is for the smallest of things to do wrong and things could end drastically.

Owen Gleiberman: All great athletes represent, on some level, our higher selves: the dream of who we are, or could be. That’s why when someone breaks the world record in the 100-meter dash, it’s on some level everyone’s victory; it’s humanity that triumphs. That’s true, as well, when you watch Tommy Caldwell and Kevin Jorgeson scale the Dawn Wall. As extraordinarily skilled as they are, the drama is one of daring and devotion. They go up that rock, defying what a human being is supposed to do, because defying those odds is the very essence of what a human being is supposed to do. In “The Dawn Wall,” we get close enough to their achievement to share it, and that’s enough to make anyone in the audience want to shoot the moon.

Trailer.
posted by Carillon (5 comments total) 2 users marked this as a favorite
We've been on a climbing movie kick between this, Meru, and Free Solo. Of the three I have to say this is my favorite, both because while hyper difficult it doesn't have the same sense of self-annihilation of Free Solo or the angst over someone who likely shouldn't be up on the wall due to risk of stroke.

I will say I thought the movie a fair in presenting the differences between Caldwell and Jorgeson, but I wonder had the situation been reversed and there wasn't that downward climb available instead of the leap, how things would have gone. Like there was so much concern over Jorgeson slowing Caldwell down over Pitch 15, but it could have easily been over that leap.
posted by Carillon at 9:20 AM on April 17, 2019

I liked this the best of the three. Free Solo pissed me off and made me anxious, though I did think it was a good film that gave me a lot to think about.

The Dawn Wall is probably the best film for someone who doesn't know much about climbing. They did a great job explaining what was going on, and the challenges faced. I know a lot about climbing (for someone who hasn't actually done much rock climbing) but if I were going in without knowing much I'd have been very glad of the approach this took.

Caldwell has a pretty interesting back story, which I won't spoil here.
posted by bondcliff at 12:23 PM on April 17, 2019

Also check out Valley Uprising, which I believe is also on Netflix. Great documentary about the history of Yosemite climbing.
posted by bondcliff at 12:24 PM on April 17, 2019 [2 favorites]

Certainly compared to Free Solo I thought this did a great job of showing the shape of the holds and the hand positions they used. In part because there wasn't the same worry about falling to their death it meant the camera positions could be more up close and revelatory.
posted by Carillon at 12:29 PM on April 17, 2019

I saw The Dawn Wall in a theater, and I liked it a lot. Caldwell has an interesting back story, as bondcliff mentioned, which helps make the narrative more complex than just "two people decide to climb a thing; at first they couldn't climb it, but then they did climb it."

Even as someone who has climbed multiples times per week for several years, indoors and out, single and multi-pitch, I appreciated that Caldwell and Jorgeson's repeated failures at certain hard sections really helped underscore and explain just how difficult what they were doing was. Seeing them slowly work out a solution, often by trial and error, sometimes coming up with a solution that worked for one of them but not the other, was interesting and heartening. It was nice that they didn't hide the fact that even world class professionals can take dozens of attempts to figure out a hard problem. 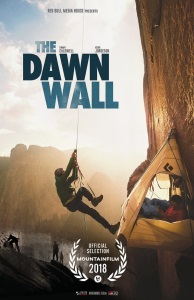