An insurance investigator begins discovering that the impact a horror writer's books have on his fans is more than inspirational.


Third in John Carpenter’s loose “Apocalypse Trilogy” (contains spoilers for all three films) along with The Thing (1982) and Prince of Darkness (1987).

"In the Mouth of Madness" is a thinking person's horror picture that dares to be as cerebral as it is visceral. An homage to the master of the macabre, novelist H.P. Lovecraft, on the part of its writer Michael De Luca, this handsome, intelligent New Line Cinema production also finds its director, John Carpenter, in top form and provides Sam Neill with one of the most challenging roles of his career--which is saying a lot.

It's about here - still fairly early in the film - that "In the Mouth of Madness" begins to lose its way. The notion of a book that drives its readers mad is intriguing (especially in a movie where no one thinks to take it off sale), but after the heroes arrive in Hobbs Corner what we essentially have is a horror house movie, in which the protagonists creep along while creatures leap at them.

The novelist Sutter Cane (Jurgen Prochnow) does eventually turn up, with lines like "More people believe in my work than believe in the Bible," but not much is done to develop him, and the movie does what no horror movie can afford to do, which is to play tennis without a net. Stories like this need rules; it's not enough to send the beleaguered hero on a roller-coaster ride through shocking images.

posted by chappell, ambrose (15 comments total) 4 users marked this as a favorite
I re-watched this the other day. Low-budget and resolutely unscary, but it has its moments - the axe-wielding agent with the double pupils, particularly - and it doesn’t take itself too seriously, which is probably a plus given the fairly silly premise. The script is kind of hammy, though, and the meta-fictional elements felt lazy to me. Also, I wasn’t clear how sympathetic Sam Neill’s character was supposed to be. He was played very sleazy (at least chronologically before his breakdown). Whether that was intentional, or just how a successful yuppie would be expected to behave in the mid-90s isn’t clear.

Knowing that Carpenter is kind of playful (like calling himself “Quartermass” for his scriptwriting credit on Prince of Darkness), and having clocked the real/fictional credits on the film poster outside the theatre at the end of the feature, I hung on to the end of the (real) credits. Sure enough:

Animal action was monitored by the American Humane Association with on set supervision by the Toronto Humane Society. No animal was harmed during the making of this film.

Human Interaction was monitored by the Inter Planetary Psychiatric Association. The body count was high, the casualties are heavy.
posted by chappell, ambrose at 11:11 AM on April 25, 2019 [12 favorites]

I don't know if I'll enjoy this as much rewatching it now, but I definitely enjoyed this when I first saw it maybe 10 years ago.
posted by tobascodagama at 11:43 AM on April 25, 2019 [1 favorite]

I love this movie despite its flaws, not least because it's one of the few movies that (mostly) gets that what you don't see is oh so much more terrifying than what you do.
posted by Mr. Bad Example at 12:09 PM on April 25, 2019 [6 favorites]

I had the same experience pretty recently, watching it again and finding it mediocre. One thing that is for sure, though, is that Sam Neill is awesome. From My Brilliant Career to Daybreakers and Dead Calm, it seems like that guy is highly capable and up for anything.
posted by heatvision at 12:42 PM on April 25, 2019 [3 favorites]

From My Brilliant Career to Daybreakers and Dead Calm, it seems like that guy is highly capable and up for anything.

I haven't seen this movie in years, but I watched it a number of times in my youth and remember loving it.
posted by mordax at 1:51 PM on April 25, 2019

I love In The mouth of madness and Sam Neil. This film is as close as we’ll likely ever get to a Thomas ligotti movie because True detective doesn’t count.
posted by vocivi at 2:27 PM on April 25, 2019 [5 favorites]

It’s also one of the more Lovecraftian mainstream movies out there, what with the creepy New England town, the black church, and the madness.
posted by qxntpqbbbqxl at 4:15 PM on April 25, 2019 [5 favorites]

-Church used for the film

I think the greatest thing and the worst thing about IMM is how dedicated it is to being "weird". The average horror film would just throw in a few Lovecraft references(Tentacled space monsters! Weird-ish things rustling in the dark!)
and call it a day but IMM totally commits. If you've never been a Lovecraft fan-boy/girl I could see this film not having much to offer, given that it is entirely fan service.


The monsters have not aged well, and would probably work better offscreen. Looking at the behind the scenes stuff they look like GWAR props.
posted by Query at 7:01 PM on April 25, 2019 [4 favorites]

In the age of Trump this film should be even more frightening. The fear was never the jump scare it was always the idea that reality is shaped by the beliefs of the conscious minds all around you. The ideas of, 1984, or post-modernist mis-readings of,The Structure of Scientific Revolutions, made into a physical reality. "Did I ever tell you my favorite color is blue?" should be even more chilling as we watch one reality get substituted for the fevered imaginings of a madman. Get enough people to believe in someone's alternative fact and it becomes not just a belief but the truth.

For twenty years, "this is an old lady on a bicycle road" has been uttered countless times by the mister or me as we've driven down many a dark and creepy New England back road.
posted by Ruki at 10:23 AM on April 26, 2019 [1 favorite]

The West Montrose covered bridge does not, in fact, take you to Hobb's End, it just takes you to the other side of a charming little river (or does it?). Any my cousin actually lives in the village where some of the weirdness takes place (and, while she's weird, she's not that weird).

When I made shelf guides for my library that showed what authors could be found in a given row, I made sure to add Sutter Cane.
posted by robocop is bleeding at 6:56 PM on April 30, 2019 [2 favorites]

I loved the way this movie ended, with Sam Neill's character watching the movie we just saw and laughing his ass off. Also loved the kid on the bike circling the town endlessly. This along with the other two Apocalypse Trilogy movies were rare in presenting the much worse things that can happen to a person than dying. So many horror movies put all their eggs into the fear-of-dying basket; but there's so much more than that that is terrifying.

(Incidentally, Carpenter's Ghosts of Mars ends similarly, with the main character in confinement while the world goes to hell outside. I always loved that echo.)
posted by ejs at 9:41 PM on May 2, 2019 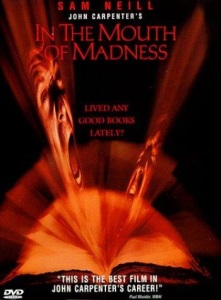