The decade-long Great Depression, a period of shifts in the country’s political and social landscape, forever changed the way America eats. Before 1929, America’s relationship with food was defined by abundance. But the collapse of the economy, in both urban and rural America, left a quarter of all Americans out of work and undernourished—shattering long-held assumptions about the limitlessness of the national larder. In 1933, as women struggled to feed their families, President Roosevelt reversed long-standing biases toward government-sponsored “food charity.” For the first time in American history, the federal government assumed, for a while, responsibility for feeding its citizens. The effects were widespread. Championed by Eleanor Roosevelt, “home economists” who had long fought to bring science into the kitchen rose to national stature.


Tapping into America’s long-standing ambivalence toward culinary enjoyment, they imposed their vision of a sturdy, utilitarian cuisine on the American dinner table. Through the Bureau of Home Economics, these women led a sweeping campaign to instill dietary recommendations, the forerunners of today’s Dietary Guidelines for Americans.

At the same time, rising food conglomerates introduced packaged and processed foods that gave rise to a new American cuisine based on speed and convenience. This movement toward a homogenized national cuisine sparked a revival of American regional cooking. In the ensuing decades, the tension between local traditions and culinary science has defined our national cuisine—a battle that continues today.

A Square Meal examines the impact of economic contraction and environmental disaster on how Americans ate then—and the lessons and insights those experiences may hold for us today.
posted by Homo neanderthalensis (8 comments total) 9 users marked this as a favorite
So reading the two books by Shapiro (perfection salad) (something from the oven) might lead you to wonder what led to such a change in America's foodways by the 50's. Well it was the depression. While Shapiro focused on the feminist aspect of all the changes in how we ate (home ec's creation as a way to keep women out of chemistry and biology in colleges, the rise in working women leading to a reliance on convenience foods, etc) This book, written by a husband and wife team looks at the period between the two Shapiro books, and how one period led to the other. A fascinating look at how when the abundance American's took for granted was shown to be a lie- our entire relationship with food and food charity changed.
posted by Homo neanderthalensis at 8:04 PM on May 16, 2019 [3 favorites]

Thanks for bringing this book to attention. I read the two Shapiro books about 15 years ago when I was in culinary school, and this seems right up my alley. Gonna go order it right now.
posted by briank at 5:51 AM on May 17, 2019 [1 favorite]

Also, the co-author and husband of Jane Ziegelman is Andrew Coe, who wrote an interesting book about the arrival and spread of Chinese food in the US. It's a good read, too.
posted by briank at 5:57 AM on May 17, 2019 [1 favorite]

These are my in-laws! My personal favorite is downplayed in this book,—Eleanor Roosevelt punishing FDR via Mrs. Nesbitt’s atrocities in the kitchen.
posted by Ideefixe at 5:09 PM on May 19, 2019 [2 favorites] 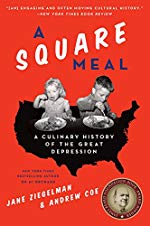