Abby has a discussion with Swampy. Swampy gets his heart broken. Avery is all about the money, much to Maria's regret. Matt relives prom night. Dan feels his future shift.
posted by sardonyx (3 comments total)
Okay, first off, how about chiming in and letting me know if it's worth me continuing to make these posts? I don't want to end up posting threads nobody is interested in reading or is even bothering to watch the show.

Now to the episode. It appears the stupid disease has hit Avery. Despite Abby telling him that she was going to investigate Alec's research, Avery just left all of Alec's journals and research at Alec's place, there for Abby to find. He didn't collect it, and he didn't pass it along to Jason. Even if he didn't want to do the manual labour himself, he could have had Jason go get it. I'm glad Maria cut off his funds, it's just a shame that her ghost daughter had to force her to see the light.

Abby continues to break every health and safety rule in existence. I suspect this will never improve through the short life of the show.

So we're finally getting filled in on the back stories of some of these characters. Jason's wife is seriously ill, and he's looking for the cure.

Dan is also looking for a cure to a curse/prophecy/spell of some sort, and of course Abby is part of the key to breaking the curse. I'm not sure this was an extra layer the production team needed to throw into this show. I think the plot is pretty thick with elements as it is, and I don't know that this was needed. I'm also really not liking how much everybody is tying their successes and failures and futures to Abby. Last episode I talked about how everybody was in love with her, and this just seems to be a continuation of that trend. Nothing can happen without Abby being at the centre of events.

I have no idea why all of the insects listened to Swampy when he told them to shoo from the reanimated corpse. He's supposed to be in charge of the Green not the Black/the Rot. That was more of an Arcane family trait if I recall my comics history correctly. (Or maybe the insects fall under the realm of the Red. I don't know if there was ever a clear split between good bugs and bad ones.)

Also, I guess Swampy still hasn't figured out his powers and his ability to shed and regrow his body, otherwise he wouldn't have jumped through the floor. That was a really weird story choice because he's supposed to be a big, lumbering guy, not a jacked up jack rabbit.

Last week Matt had the stupidest line in the episode. This week his mother gets that honour. I don't know what the actual body count is but I think it's around half a dozen of dead people so far (give or take a bit). Somehow I suspect that's still lower than the number of people who have died in the town over the past five years. Now if she had specified died from suspicious circumstances, I'd be more willing to accept that calculation.

I guess this was a necessary table setting episode, but it left me feeling like I had wasted my time and that nothing had really happened, even if I know logically that's not true.
posted by sardonyx at 7:02 PM on June 14, 2019 [2 favorites]

I'm happy to keep reading threads about this show, FWIW, but to me the only parts of it that are really working for me are the horror bits (and some of the swamp noir type stuff around Avery's machinations and iron-fisted control of the town). I am looking forward to some Woodrue villainy, though, and if nothing else this show has inspired me to go back and reread Alan Moore's originating run on Swamp Thing, which holds up pretty well.

I am a person who genuinely like bugs, but the swarming bugs here managed to creep me out pretty well.

That scene in this episode where a bunch of the senior CDC guys are literally holding small pieces of gauze over their mouths--are they fucking with us? Like, that is obviously a thing the director asked the actors to do, right?
posted by whir at 9:45 PM on June 17, 2019 [2 favorites]

Okay, first off, how about chiming in and letting me know if it's worth me continuing to make these posts?

For what it's worth, I'm enjoying your discussion of the episodes, and I do plan to finish out the show. Despite Abby's clear allergy to face masks, the horror stuff is mostly working for me. It's also sort of weird to see DC putting out something where people are just getting torn apart.

That said, Swamp Thing is already canceled, so I dunno how invested everyone wants to get.
posted by mordax at 1:03 AM on June 18, 2019 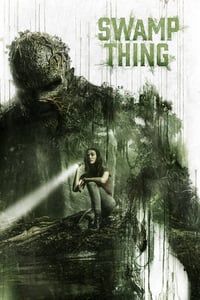