Two city-bred siblings are stranded in the Australian Outback, where they learn to survive with the aid of an Aboriginal boy on his "walkabout": a ritual separation from his tribe.


There is a lot going on in this film. Some of the themes are obvious, others are well under the surface.

On top of course is the children surviving in the Outback. There are issues of alienation and communication.

Coming out in 1971, it is one of the first of the Australian New Wave, though it is considered to be something of an edge case as its director and female lead are both British and the money for the film was raised in the United States.

Ebert's original review: The contrast between civilization and man's more natural states is well-drawn in the movie, and will interest serious-minded younger people (just as, at the level of pure story, "Walkabout" will probably fascinate kids). But I don't think it's fruitful to draw all the parallels and then piously conclude that we would all be better off far from the city, sipping water from the ground, and spearing kangaroos for lunch.

Ebert's Great Movie review: The movie is not the heartwarming story of how the girl and her brother are lost in the outback and survive because of the knowledge of the resourceful aborigine. It is about how all three are still lost at the end of the film--more lost than before, because now they are lost inside themselves instead of merely adrift in the world.

Trailer
posted by Fukiyama (1 comment total) 1 user marked this as a favorite
Watching this movie for the first time as an adult was an interesting experience. Growing up, I had already seen the Crocodile Dundee movies many times on cable. It was an eye opening experience to see Wally in a serious movie taking pot shots with his revolver at his children and then committing suicide out in the wilderness.

I mentioned alienation in the OP. One of the things that really struck me watching the movie was the alienation in civilization. The dad in the beginning of the movie has his issues that lead him along his path. And then at the end, the girl has grown up and is in much the same environment and she is not all there as she apparently daydreams of swimming back in the Outback.

There is also the interesting juxtaposition of the people the children come across or almost do while wandering along. I doubt there is any hidden meaning, but it is interesting the children are trudging along in their formal school uniforms and the adults are dressed in the styles of the day. Dad also at the beginning of the movie wears a three piece suit.
posted by Fukiyama at 10:15 AM on June 19, 2019 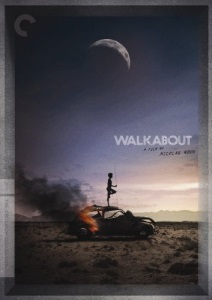