The Killing Fields tells the real-life story of a friendship between two journalists, an American and a Cambodian, during the bloody Khmer Rouge takeover of Cambodia in 1975, which led to the death of 2-3 million Cambodians during the next four years, until Pol Pot's regime was toppled by the intervening Vietnamese in 1979.

Ngor had never acted before, but John Malkovich noted that Ngor had been acting all along, having hidden his identity as a doctor in order to survive Cambodia before eventually escaping.

Ebert's review: The film is a masterful achievement on all the technical levels -- it does an especially good job of convincing us with its Asian locations -- but the best moments are the human ones, the conversations, the exchanges of trust, the waiting around, the sudden fear, the quick bursts of violence, the desperation.

Ebert spent the day of the Oscars with Haing Ngor.

Pauline Kael's review; Kael makes some excellent points about the flaws of the movie, including how Schanberg is presented as a character and the intrusiveness of Michael Oldfield's score.

Lots of details at Wikipedia

Trailer
posted by Fukiyama (2 comments total) 2 users marked this as a favorite
If there was a pantheon of movies from my childhood, movies that I saw bits and pieces of at different times and in different contexts that indicated they were "important", The Killing Fields would be included.

Due to whatever reason, I didn't actually see this movie all the way through until I was older, probably in high school in the 90s. Pauline Kael's review that I linked to raises some great points about the characters that i won't reiterate. The main things that get me about the movie are what Ebert talked about. The movie captures that atmosphere, the waiting around, the tension, the dramatic moments, the life in the camps.

One of my favorite parts of the movie is when they're all in the French embassy and they're waiting to find out what's going to happen. The Cambodians are being forced out a group at a time and Pran is running out of options. In the meantime, they're hanging out in post-colonial decadence, playing the piano and drinking up the embassy's wine. The French of the embassy have a deep love for the country, but as their Cambodian friends are forced out, they hide their despair at the situation with a callous wave of the hand as the Khmer Rouge march way the refugees.

The best scenes are the scenes with Pran and Sydney and at least one other of their reporter friends. The movie wouldn't have worked without John Malkovich and Julian Sands rounding out the group of reporters. Craig T. Nelson is excellent as the American military attache. The American aide who feeds Sydney info occasionally has one of the best lines of the movie, "Stay or live."

It's pretty gruesome when Pran falls in the watery hole full of decaying flesh and bone.

The evacuation is very well done. From the people trying to get into the embassy and Sydney getting worried when Pran doesn't show up to the urgency of trying to get a ride out as time runs out. That entire part of the movie is great at sustaining the tension.

And there's the final reunion with John Lennon's "Imagine". Joffe claimed he wasn't really cognizant of the lyrics when he included the song. In any case, for me the words weren't important as much as the music and Lennon's voice matching up with the action. I pay more attention to the two freeze frames, the lingering of the camera on facial expressions.
posted by Fukiyama at 10:27 AM on June 23, 2019 [1 favorite]

Makes a weird double-feature with Swimming to Cambodia, which also has some excellent historical background for the events of "Killing Fields."
posted by rmd1023 at 10:45 AM on June 24, 2019 [1 favorite] 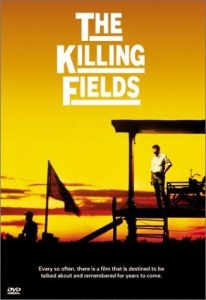