An action-packed series-starter perfect for fans of The Heroine Complex and Not Your Sidekick. “I didn’t know how much I needed this brave, thrilling book until it rocked my world. Dreadnought is the superhero adventure we all need right now.”—Charlie Jane Anders, author of All the Birds in the Sky Danny Tozer has a problem: she just inherited the powers of Dreadnought, the world’s greatest superhero. Until Dreadnought fell out of the sky and died right in front of her, Danny was trying to...


.. keep people from finding out she’s transgender. But before he expired, Dreadnought passed his mantle to her, and those secondhand superpowers transformed Danny’s body into what she’s always thought it should be. Now there’s no hiding that she’s a girl.

It should be the happiest time of her life, but Danny’s first weeks finally living in a body that fits her are more difficult and complicated than she could have imagined. Between her father’s dangerous obsession with “curing” her girlhood, her best friend suddenly acting like he’s entitled to date her, and her fellow superheroes arguing over her place in their ranks, Danny feels like she’s in over her head.

She doesn’t have time to adjust. Dreadnought’s murderer—a cyborg named Utopia—still haunts the streets of New Port City, threatening destruction. If Danny can’t sort through the confusion of coming out, master her powers, and stop Utopia in time, humanity faces extinction.

“I see a world that is terrified of me. Terrified of someone who would reject manhood. Terrified of a girl who knows who she is and what she’s capable of. They are small, and they are weak, and they will not hurt me ever again. My name is Danielle Tozer. I am a girl. No one is strong enough to take that from me anymore.”

An Interview with Author April Daniels:

Free to Fly: A Review by James Nicoll

posted by happyroach (6 comments total) 3 users marked this as a favorite
Would just like to comment that I'm waiting for book three ...
posted by cstross at 3:57 AM on June 29, 2019 [2 favorites]

I remember sections of this book speaking to me so powerfully that I knew I could never recommend it to anyone lest they see into me.
posted by one for the books at 12:16 PM on June 30, 2019 [1 favorite]

I thought this was a pretty even-handed review, with strengths and weaknesses.

1. Danielle is believably limited as a character. She’s hemmed in by family and society, so she has narrow horizons. She tends to overreact. She trusts and mistrusts pretty quickly.

3. While the messages are unsubtle, they are worth making.

4. The supporting cast of supers almost all get a little attention, making them feel at least as real as characters in many comics.

5. Danielle’s “hero arc” is well-plotted, and there’s a nice resonance of her learning to “put herself together” that’s very on-point.

6. At its best, the book does a great job expressing soaring joy and crushing misery, as Danielle grows into being the person she wants to be and the hero she (maybe) wants to become.

7. The depictions of powers and descriptions of action are evocative and do a good job of making them feel real. The action sequences are mostly clear and easy to picture (and when they aren't, it’s often because Danielle is losing her shit.

1. Danielle is a little flat; as the review above notes, she doesn’t really have interests beyond being trans and super. That makes her maybe easy to relate to, but it leaves her a bit of a cypher. We don’t see her interact with too many characters, so we’re stuck with her internal life as a guide. Calamity may get more character exploration...

2. Similarly, some of the supporting cast are very one note. Magma is kind, the parents are abusive, David is a jerk, and Greywytch is... not even one note. Yeah, there is no way she won’t be an awful person, but we never see her be anything but awful to anyone, even the raven. The henchman is more nuanced than she is. Don’t get me wrong: her TERFism shouldn’t be up for debate, but with the dad and Utopia we get to see a bit of the justifying lies they tell themselves, but Greywytch (a name that is horribly 90s B&W explosion) gets nothing.

3. Mostly, I wish that Daniels had given her novel a little more room or spread some of the plot over more than one book. Drawing out David’s sullen betrayal would have made it stronger — we don’t get to see enough of him for it to hurt and Danielle seems to get over it pretty fast — and Greywytch’s shitty bigotry could have been veiled a little longer. I wonder if this was originally pitched as a solo novel, so a lot of characters had to be introduced and moved on.

All in all, a really good first novel, despite the occasional weak moments, and I’m already listening to the second. Audiobook review — the narrator isn’t great, but she’s ok. Her Calamity voice is probably the best part of it.
posted by GenjiandProust at 2:32 PM on July 9, 2019 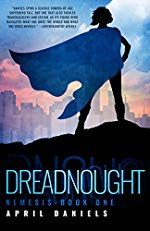