The story of Bobby Sands, the IRA member who led the 1981 hunger strike in which Republican prisoners tried to win political status. It dramatises events in the Maze prison in the six weeks prior to Sands death. Steve McQueen directed other movies such as Shame and 12 Years a Slave.
posted by jouke (6 comments total)
Thanks jouke!

Holy cow, when a movie involving chronic smearing of shit on the walls of a cell can be so gorgeous... The sound direction was powerful, too. Very Beethoven.

Even without smell-o-vision, I was routinely gagging from the implied olfactory assault.

How was everyone not subject to chronic sepsis (irl)? Or even hepatitis?!

Impressed with Stuart Graham - but I can't figure why he's so familiar (I don't recognize him from his filmography, so maybe I'm thinking of someone else - he's been involved in two different Frankenstein/ Mary Shelley projects). I was impressed with Brian Milligan, too. Another solid Liam Cunningham performance.

I wonder how hard it was to cast the emaciated prisoners. Fasbender's weight loss wasn't quite as shocking as Christian Bale's in 'Rescue Dawn' in 2006 (and Bale had a bunch of bulky roles between that and 'The Machinist' in 2004).

But even "emaciated" tends to be bulkier than a lot of the actors/ extras in soldier/ fighter roles in the original 'Ben Hur' (1959).

This felt a lot like Papillon (starring a different Steve McQueen) but without any of the hope (huh, there's a 2017 remake with Charlie Hunnan). I wonder if the Milligan fly/ broken window-mesh scene early on was CG or practical effect.
posted by porpoise at 7:55 PM on June 30, 2019

The acting is so understated, so effective in movies by Steve McQueen. Somehow that makes it more engaging. And more puzzling as well.
If the movie isn't shouting to me what I should notice, what I should think about what's going on, what does strike me, what do I think.

There's something compelling and frightening in watching people who choose a course of actions that leads to their certain demise. True martyrs. Which ofcourse brings the early Christians to mind. Following their conviction to certain torture, being slaughtered. And then you start to think about current people with a similar mindset.

I have to say that I had to really focus to understand the Irish conversations. But then English isn't my native language.

Yes, a great movie! My only complaint is that the DVD I had didn't have subtitles, and a lot of the amazing 17-minute dialogue between Sands and the priest was mumbled, and I wanted to grok every single word.

Just watched. So beautiful. Much more thoughtful than I would have expected about a topic so.. for lack of a more nuanced term.. political. I mean, McQueen clearly has a viewpoint and made clear who holds the power in this movie - the occasional Thatcher broadcasts clarify that, along with moments like the Ulster loyalist flexing his fist while an emaciated Bobby Sands bathes. But his choice to show long shots of the guard and the police officer metabolizing their role in the scene was incredibly powerful. The way lopsided violence harms the perpetrator as well as the recipient. The boldness of including so little dialog, so little context, period. I'm very curious how this film lands for someone with no knowledge about Northern Ireland, the IRA, 70s international liberation movements, Thatcherism... Anyway, now that I've seen a few McQueen movies I'm pretty blown away by his incredibly generous eye and artistic vision. The only contemporary director I can compare him to is Barry Jenkins. The beautiful use of color, long slow shots, incredible beauty portraying suffering but also nature and human connection.
posted by latkes at 7:18 PM on February 9, 2021 [1 favorite] 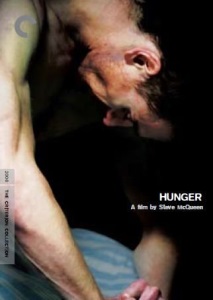