The highly anticipated sequel to Dreadnought, featuring “the most exciting new superheroes in decades.” (Kirkus, starred review) Only nine months after her debut as the superhero Dreadnought, Danny Tozer is already a scarred veteran. Protecting a city the size of New Port is a team-sized job and she’s doing it alone. Between her newfound celebrity and her demanding cape duties, Dreadnought is stretched thin, and it’s only going to get worse. When she crosses a newly discovered billionaire...


...supervillain, Dreadnought comes under attack from all quarters. From her troubled family life to her disintegrating friendship with Calamity, there’s no lever too cruel for this villain to use against her.

She might be hard to kill, but there’s more than one way to destroy a hero. Before the war is over, Dreadnought will be forced to confront parts of herself she never wanted to acknowledge.

And behind it all, an old enemy waits in the wings, ready to unleash a plot that will scar the world forever.

TV Tropes: Nemesis Series
posted by happyroach (3 comments total) 2 users marked this as a favorite
I liked Dreadnought, but the reviews for this book over at Trans Book Reviews have made me unwilling to even touch it.
posted by one for the books at 12:14 PM on June 30, 2019

I liked Dreadnought a lot, but this one used a trope I absolutely hate (and hated long before I knew I was a woman):
The powerful woman stripped of her power and tortured.

I pushed through it, and decided it was worth it, but I can't say I enjoyed the book nearly as much as the first.
posted by Tabitha Someday at 2:21 PM on June 30, 2019

I enjoyed the superhero parts well enough but Greywytch was enough of a straw-TERF that I wondered how she ever made it to hero status in the first place. Danny's father is also pretty much unforgivable, but there are least glimmers of understandable motivation amongst the abuse and transphobia. The heroes kept defending Greywytch because she had done good things in the past, but I can't think of a single scene in either book where she was not mustache-twirling at absolutely everyone, even her own teammates. If she'd been like that her whole career, how did she ever pass as sane long enough to do any heroics? 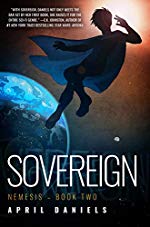