Sam (Andrew Garfield), intelligent but without purpose, finds a mysterious woman swimming in his apartment's pool one night. The next morning, she disappears. Sam sets off across LA to find her, and along the way he uncovers a conspiracy far more bizarre. A neo-noir/comedy/mystery from writer-director David Robert Mitchell (It Follows).

Some folks will know what I mean when I say this is Mitchell's Southland Tales.
posted by DirtyOldTown at 12:40 PM on July 10, 2019 [3 favorites]

Yeah, that review pretty much nails it. And this is absolutely Mitchell's Southland Tales. (I have a theory about why this is.)

My tastes sit very cozily in the Venn diagram overlap of "LA tales of mystery and paranoia" / "love of classic Hollywood" / "young director betting the farm" niches, and as a result I found it pretty effortlessly watchable. Even so, it still mostly whiffed for me.

I love a shaggy dog mystery, but the movie somehow calls out its shagginess from the outset, which sort of sucks the fun out of realizing "Hey, this isn't going to go anywhere, is it?"

Otherwise, its characters were too underwritten or unlikable for me to ever care much about what was happening. Nearly everyone is a total cipher, or represents a Big Obvious Theme. Garfield's Sam is the closest we get to a real character, and he's pretty thoroughly unpleasant: A feckless fuckboy who leers at his neighbors, violently assaults small children, and openly talks about his hatred for homeless people.

But, still, effortlessly watchable. Beautifully photographed, an awesome score, and lots of very good performances, even if they were in service of threadbare characters. (I'd be totally on-board for a spin-off centered around Jimmi Simpson's character.)

All this said, I wouldn't be surprised if this winds up being a movie I eventually watch like twenty times. Maybe I'll come back here in a decade and think "Wow, was I wrong about this one."
posted by incomple at 12:59 PM on July 10, 2019 [1 favorite]

A big shot exec's office in Hollywood. STUDIO EXEC is rubbing his hands in excitement as DAVID ROBERT MITCHELL sips a latte.

STUDIO EXEC
It Follows was a terrific picture, David! What an idea! Got any more?

MITCHELL sets down his coffee, cracks his neck.

MITCHELL
I've been thinking about this since I was fourteen years old.

STUDIO EXEC is slumped in his chair, exhausted, barely hanging on.

MITCHELL
What do you think?

STUDIO EXEC
That is a lot of ideas. A lot. Like, really a lot. So many. Which ones do you want to use for your next picture?

I loved this movie SO MUCH. I am so happy when an artist comes up with something so bizarre and commits to it 200%, especially when it hits all my sweet spots like Under the Silver Lake did.

Certainly, Sam is unlikeable/hateable, and it’s funny how at the last minute they cement it by strongly implying (almost flat-out stating) that he is the Dog Killer. But Garfield makes him pretty fascinating to watch. And it was a lovely touch when Sam finally gets to talk to Sarah on the phone, and tells her he’s been looking for her. She responds, “Why? You hardly know me,” and the whole narrative impetus of the movie crashes down. She’s been living her own life and making her own choices, as extreme as they may be, but she never needed someone to save her, especially an unhinged total stranger who may have murdered people during his search for her.

The scene with the Songwriter is perhaps my favorite scene of any movie I’ve watched in the last year. So bizarre, so awful, and scored with a tinkling piano medley of decades of popular music. Did that scene really happen, or was it in Sam’s head? This movie makes the question almost moot.

Which leads to my second favorite scene, the one most likely to be a hallucination: The Owl’s Kiss visiting Sam in his apartment. The way she just runs away with an eep! when he points the gun at her, and is never heard from again, is hilarious.

As for the culmination of Sam’s search, I thought it was kind of poetic. A guy on the verge of homelessness, who lost his car because he can’t keep up the payments, discovers that the ultra-wealthy have given up on finding meaning in this world, and have decided to commit slow and comfortable suicide in the hope of finding meaning in the next. Sam searches for meaning rather than working to keep afloat, but it leads to the same place: Nowhere.

My one real complaint about the movie is that it is so rooted in and built around ye olde Male Gaze. Certainly Sam is continually checking out Sarah’s ass because of his own unhealthy relationship with women,* but the constant female nudity and objectification extends far beyond Sam’s perception and made me feel complicit in his grossness.

* It’s kind of chilling how Sam keeps dreaming/imagining women barking at him, doubly so when you realize he is probably the Dog Killer, triply so when you remember he said he used to have a dog with the girlfriend who later dumped him, but that dog died (possibly was killed, possibly by him). I was left with the feeling that if Sam doesn’t level out somehow he could move on to murdering women. NOT LIKEABLE.
posted by ejs at 7:20 PM on July 15, 2019 [4 favorites]

My one real complaint about the movie is that it is so rooted in and built around ye olde Male Gaze.

I think Mitchell is trying to satirize that vibe, not embody it. How well he pulls it off is a more than fair debate though. So I'm not disagreeing with you, just making sure we are on the same page for how we talk about how that all plays out.
posted by DirtyOldTown at 11:19 AM on July 16, 2019

I liked this movie despite its flaws. No plot point makes any sense if you think about it for more than 30 seconds. Why does every woman the main character encounters want to sleep with him? He looks like hell and he has no money. Why would a cabal of rich and powerful men leave a breadcrumb trail to their doorstep? Why would they transmit their messages through every popular song of the last half-century, and why would they need, or want, a single immortal songwriter to do it? Why are there so many old magazines, pornographic and otherwise, lying around people's homes? Why wouldn't the snipers who killed a billionaire's daughter just wait for their other target to come up for air?

For all that, I think it works as a nightmare about the predatory sexism of show business, heightened by its expression through the point of view of a man who wouldn't understand that theme even if it were explained to him in short sentences of small words. He would probably take offense to it.

It's too long and diffuse to be a really effective mood piece, so it's probably condemned to cult status at best, but I'm glad they still make movies like this, even if they can't sell them.
posted by Rustic Etruscan at 1:29 PM on September 5, 2019 [1 favorite]

It gets better, though the main character is never made much more sympathetic and is written as if he is inhumanely attractive or something, and the sexism feels pretty unexamined tbh.

Nevertheless I guess it kind of won me over when Andrew Garfield tries to sneak-swim hiding his head behind a beach ball.

The mix of paranoia with horniness made me think how the movie guy horniness manifests as an immediate yearning to be relevant in the woman's life, to immediately start *mattering* to her, regardless of his ignorance of her life and his own problems and insuitability. The paranoia plot is often the same... The hero sees one thing that draws them into some world where they don't belong, barging into a situation they don't really understand at all, into something that's unknowable as the life of just one other person. But ultimately it's not very mysteriously or magical, it's just more capitalism.

(Actually it is kind of refreshing that there's no drug abuse at all. Also the color is beautiful without being color-corrected into a smear, amazing.)
posted by fleacircus at 12:44 AM on October 26, 2019

I think it's strongly implied that Garfield's character is the dog killer, and either way, that outburst of violence against the teenage vandals makes it clear that he's a psycho. The tone is all over the place and it's never clear exactly how unsympathetic we're supposed to find him. As far as the sexism goes, I think Mitchell knew what he was doing: The scene where Garfield and his acquaintance play peeping Tom with a drone, only to lose their buzz when the woman starts crying to herself, is an obvious joke at their expense, and a good statement of the movie's whole theme. Whether you can tolerate this "sexist but woke" style is a matter of taste.
posted by Rustic Etruscan at 8:27 PM on March 8, 2021 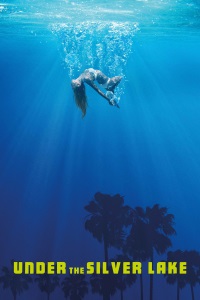