A feminist Guardians of the Galaxy—a smart, swashbuckling, wildly imaginative adventure of a rag-tag team of brilliant misfits, dangerous renegades, and enhanced outlaws in a war-torn future.


A wildly successful innovator to rival Steve Jobs or Elon Musk, Vivian Liao is prone to radical thinking, quick decision-making, and reckless action. On the eve of her greatest achievement, she's trying to outrun those who are trying to steal her success.

In the chilly darkness of a Boston server farm, Viv sets her ultimate plan into motion. A terrifying instant later, Vivian Liao is catapulted through space and time to a far future where she confronts a destiny stranger and more deadly than she could ever imagine.
posted by overglow (6 comments total) 6 users marked this as a favorite
I put this on my library hold list yesterday! Nineteen weeks until I can expect to read it. . .
posted by dinty_moore at 7:13 AM on July 24, 2019 [1 favorite]

Honestly, this is such a well-written book and I am continually pleased and surprised that Gladstone can write such believable and realistic women.

I BELIEVED Viv and Zanj and Xiara. Their thoughts resonated with mine and I feel sad that I'm so surprised that Gladstone is such a good writer that he can write women that feel real. Not like a cartoon reflection of what men perceive us to be, but an actual breathing woman.
posted by teleri025 at 12:11 PM on July 24, 2019 [3 favorites]

I actually thought the same thing when I was reading it! It was on my mind because about ten days earlier I'd read The Rook, which hugely annoyed me in this respect. I'd written that ranting comment and here was another male novelist writing female characters ... and the difference was night and day. But I'd noticed this in his earlier books.
posted by Ivan Fyodorovich at 4:25 PM on July 24, 2019 [1 favorite]

I just stayed up late to finish this, the night before last. Really fun read. In addition to everything said above, it's a very clever take on Journey to the West. Zanj is a really, really good Sun Wukong.
posted by Rinku at 6:26 PM on July 24, 2019

Yes! Part of what I loved about this book is how emotionally rich and compelling it was while at the same time being a weird, fantastical space opera! And I especially loved the way those things intersected, such as (major spoilers follow):

-- The Empress being Viv!

-- The way Hong figured out how to escape the Empress's traps through mystical, non-dualistic awareness of interconnection.

-- The way Viv realizes she has to go against her tendencies to go it alone, see people as resources, and maintain control and instead she needs to open up, be vulnerable, allow herself to be moved, and try to persuade and befriend rather than manipulate or else she will just become the Empress again.

-- The way Gray being a little kid isn't just a cunning illusion but actually who he is/his level of maturity.

-- The way Gray uses memories and stories to restore his Grayframe kin to themselves (though I wish there had been more description of the result of that).

-- I loved that the Bleed was actually a result of The Empress's resistance to change, that they were essentially the wildlife of the Cloud angry at being displaced.

-- I loved how much the story felt like a portal fantasy, including the way Viv felt torn between staying in the future (and with her friends) and returning to her home and saving the world -- and the clever, interesting resolution through Viv actually belonging to the future through being a recreation of her simulated self, rather than being pulled out of the simulation.

-- I thought it was interesting the way characters being too "good" (Yannis, Golden Zanj) was a flag that they were actually being deeply deceptive.

-- I'm not sure what I think about the parallels between Viv/the Empress and Zanj/Golden Zanj. Seems a little too samey to part of me, but also generally feels like it works and highlights/expands the theme.

-- Along those same lines, it's interesting how similar Viv and Zanj (and the Grand Rector and the Ornclan Chief and Yannis and the other Suicide Queen whose name I forget and of course the Empress) are. And how cool that the characters exploring the tensions of leaderships and the complexities of power are all women!

-- I appreciated the way that it was kinda obviously unexplained how Viv could just keep slipping out of handcuffs, etc., and especially could use the crown to command Zanj--and how she didn't think too much of it because being in command just felt natural to her. And how that fit so well with the reveal that she is the Empress (in the past from a simulation).

I finally finished this yesterday! (I had to take it out from the library twice, since there were so many holds on it).

I think that what was really well crafted about this book was that all of the characters - supporting, side characters, whoever - all had enough motivation, interiority and growth outside of the main character to feel real. Hong, for example, would be a character that would be easy to make two dimensional, but the text really seemed to take him and his belief system seriously. And so when the characters start leaving Viv (about halfway through the book) it makes sense - they've all got their own lives to lead.

I was double checking the page count right before the first Empress fight - I honestly thought that the page count was duplicating or there might be an issue with the ebook. The reveal and the realization that the rest of the book was about bringing the gang back together and having them grow and fight seemed, I don't know, more complete than you usually get from this sort of portal fantasy.
posted by dinty_moore at 11:27 AM on February 19, 2020 [1 favorite] 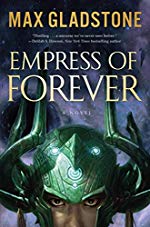