Pitch Black is a 2000 American science fiction action film co-written and directed by David Twohy. The film stars Vin Diesel, Radha Mitchell, Cole Hauser, and Keith David. Dangerous criminal Richard B. Riddick (Diesel) is being transported to prison in a spacecraft. When the spaceship is damaged by comet debris and makes an emergency crash landing on an empty desert planet, Riddick escapes. However, when predatory alien creatures begin attacking the survivors, Riddick joins forces with the surviving crew and other passengers to develop a plan to escape the planet.

Antonia Quirke: We are spared the ubiquitous, post- Blade Runner, apocalyptic monologue (Diesel tries, but his ginormous arms and dancer's waist are too distracting). Instead, the cast chug about, screaming bad news and sound advice at each other, while creatures pour out of flutes in the earth, like pollution from Industrial Revolution chimneys. It is unbelievably frightening. As it gets dark, the whole landscape of the planet seems inflected with horror, as though it were a shark-filled sea. The crew must take on the never-ending night, and therefore, in a sense, time itself.

Scott Chitwood:Truthfully, I enjoyed this film. I wanted a good popcorn flick with cool effects and a lot of action, and that's what I got. The plot is not particularly deep, but for what it sets out to do, it does well.

The cast was well chosen. Vin Diesel was excellent as the prisoner Riddick. He's tough, he's mean, and he's definitely no good guy, but you begin to like him nevertheless. Diesel played the part very well and I'd definitely like to see him play this character again. I think he'd be great in other action flicks. The rest of the cast did good jobs as well.

Trailer
posted by Carillon (20 comments total) 6 users marked this as a favorite
Kicked off the Chronicles of Riddick franchise, including 3 films, 2 games, some short animated features, and some other media as well.
posted by Carillon at 11:08 AM on August 7, 2019 [2 favorites]

LOVED this movie. My favorite movie for years and years, although now it's been years since I've seen it.

Just the idea of a prison transport ship crashing and the prisoners/guards having to fight monsters is cool. If anything, they should have leaned into that even more. And the goggles are cool. The light-hating monsters are cool (they're sort of like locusts, if I remember right? which is awesome on its own). And I wanted to have Vin Diesel's muscles so bad when I grew up (didn't happen, but I still like to watch him use them!).
posted by rue72 at 11:50 AM on August 7, 2019 [3 favorites]

Well, now I've been reminded of the scene where Riddick dislocates his shoulders to escape from his restraints. Ugh, ugh, ugh.
posted by rhamphorhynchus at 11:59 AM on August 7, 2019

Huh, I totally remember Pitch Black (back when Vin Diesel was a _new_ action star), and Chronicles with all the over the top creepy Bad Guys and court drama... Was Riddick the one with the jail and the Doom Sunrise or am I thinking about another series entirely?

Yeah, I think you're thinking of Chronicles of Riddick. Which I kinda hated (not creepy enough, too much of a Store Brand Star Wars vibe). But that's the one with the all-grown-up-and-now-hot Jack, Riddick using just his arms to climb this enormous rope in the jail, etc.

Lots of fun action movies in that era (early 2000s?), though. Pitch Black and Four Brothers were my go-tos for YEARS. I loved them so much that for a long time I genuinely thought I liked action movies!
posted by rue72 at 12:17 PM on August 7, 2019

Ah yeah, Riddick was the only one easily accessible in my library and it's _completely_ unfamiliar at this point. I guess I must be thinking of The Chronicles of Riddick with the jail and doom sunrise and suspiciously hot Jack _and_ all the Necromonger Court Drama? Golly.

What I sort of remember most about Pitch Black is how well it did with what seemed like a relatively limited budget. And it was fantastic in the theater with the searing brightness in the early part of the movie turning into scary and confusing darkness at the end - I never quite manage to capture that at home, but man up on the big screen, it really used the lighting to good effect.
posted by Kyol at 12:47 PM on August 7, 2019 [1 favorite]

This is one of those films that I loved at the time but am terrified to revisit because I'm afraid that it won't have aged well.
posted by dinty_moore at 1:14 PM on August 7, 2019

Riddick is the one with mercs fighting, mud demons (which are legit creepy to me), and the dog that Riddick builds up poison tolerance in. I've liked all of them, so definitely excited about the 4th one that's supposedly in the works.
posted by Carillon at 1:29 PM on August 7, 2019

I am definitely a fan of Chronicles. I love the art direction (and Thandie Newton!!) and its just big cheesy fun.

but yeah, Pitch Black is a tight little monster movie. its got a simple but terrifying setup, complex characters and scary scary monsters (you're not afraid of the dark, are you?) also, Vin Diesel is hot, there I said it. not sorry. its the voice. he's such a big dumb slab of muscle :D

Low budget, but great use of it.

Not surprised that it spawned a sequel (had no idea that there was a third Riddick movie, and another one! cool, I'll watch them); Vin Diesel was a bit of an update on the action hero (he's got brawn, lots of it, but also some agility and smarts) and his charisma really shines through even though the character is a little monotone.

I actually liked the scifi world building - here with the bat monsters and their ecology - but Chronicles really took off with the Necromongers and super-max prisons and ghostly Dame Judi Dench (and all the other great actors in it) really shone even though it was less "intellectual" than Pitch Black.

The ecology (the sheer number of monsters - where is the population nutrient and energy coming from?) is a little goofy, but not as bad as some and was definitely creative.
posted by porpoise at 1:59 PM on August 7, 2019 [1 favorite]

I tried watching this movie once and failed to get into it, but I'm glad it was enough of a cult success for there to be a sequel so that Vin Diesel could teach Dame Judi Dench to play D&D.
posted by tobascodagama at 2:08 PM on August 7, 2019 [5 favorites]

Wayne Barlowe designed the aliens in this film. I had to put an early sketch online about a year before it came out for some corporate movie site I was working at my old dot-com. I was stoked for the movie for this reason.
posted by Catblack at 9:43 PM on August 7, 2019 [2 favorites]

My son and I re-watched the trilogy a couple of months ago and dug them all,

PB has a small budget, cast of unknowns vibe that puts the heavy lifting on the atmosphere of the film and yeah, it holds up.

Chronicles is slick, with a great turn by Karl Urban as the bad guy, such a contrast to his McCoy in Star Trek.

The race to beat the rising sun is a great action sequence.

David Twohy is a bit underrated, I think. He's put out some interesting films over the years. Enjoyed his submarine ghost movie, Below as well.
posted by smoke at 2:31 AM on August 8, 2019 [1 favorite]

a great turn by Karl Urban as the bad guy, such a contrast to his McCoy in Star Trek.
Much more like his Caesar in Xena though.
posted by rhamphorhynchus at 12:54 PM on August 8, 2019

Love Riddick and the sequels. I've seen a few tight little scary scifi films with a cast either at the beginning of their fame or long-term character actors, and therefore really really good at their jobs. There's kind of a grittiness and plausibility to them that gets lost once everyone involved is making a blockbuster.

The batshit gothicky court shenanagens in Chronicles always reminds me of Dune somehow.
posted by glasseyes at 6:48 AM on August 9, 2019 [1 favorite]

Skip bleaching was the new hotness back then but boy is it put to good use in this. And it's beautifully shot and edited too (the cat and mouse scene in the giant skeleton!).

I have an enormous fondness for B movies that are far better than they need to be, B movies that someone gave a shit about, and this is one of the best of those. It's gorgeous, the story is interesting and compelling, it explains just enough to make you want to know more, the character arcs are really fascinating. There's a lot in there.

Oh Scott, you had no idea what you were witnessing the beginning of.
posted by automatronic at 8:14 AM on August 10, 2019

Loved this movie, although despite what it did for Vin Diesel's career, I always felt that Radha Mitchell's character was the lead, and she's the one who got the character arc. She goes from trying to jettison the passengers to sacrificing herself for Riddick.

I saw one or two of the other Riddick movies, but Pitch Black is the simple streamlined best of them.
posted by suelac at 10:11 PM on August 11, 2019 [5 favorites]

I was really taken aback when the character and actor from this random amusing bit of silly SF horror suddenly became a Huge Deal. I still don't quite understand it.

When I saw this, I enjoyed it, but I still maintain that the premise was absurd because how the hell does something photosensitive enough to burn in a flashlight beam evolve on a planet that only has darkness once every ten? years or whatever it was. It makes a good monster but trying to dress up mythic cycles with science never ends well. Just make them demons and have done.
posted by Scattercat at 12:09 AM on August 13, 2019 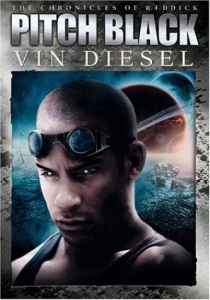