Planetary has been hailed as a timeless story that turned modern superhero conventions on their heads. Written by Warren Ellis (Transmetropolitan) and with stunning art by John Cassaday (Astonishing X-Men), this critically acclaimed, landmark series took a look at the inter-dimensional peace-keeping force known as Planetary. The trio on the ground includes Elijah Snow, a hundred-year-old man, Jakita Wagner, an extremely powerful woman, and The Drummer, a man with the ability to communicate with machines. Tasked with tracking down evidence of super-human activity, these mystery archaeologists uncover unknown paranormal secrets and histories, such as a World War II supercomputer that can access other universes, a ghostly spirit of vengeance, and a lost island of dying monsters.
posted by DirtyOldTown (7 comments total) 2 users marked this as a favorite
This is one of the greatest achievements in comics this century. It's also one of the quintessential "Even if you don't like comics, you will probably like this," recommendations.
posted by DirtyOldTown at 3:44 PM on August 10, 2019

I randomly pulled this off the shelf at my public library when I decided to start reading comics. It definitely gave me an unrealistic expectation for future comic books. Wish there was more of it!
posted by LegallyBread at 4:13 AM on August 11, 2019

I thought this had a brilliant opening, middling middle, and disappointing end. The early issues promised something cosmic and transcendent, but in the end, the Four just turned out to be The Fantastic Four as selfish assholes. The ending almost had a "Yeah, bored now" rushed feel to it.

On the other hand, it Did have Jakita Wagner. Who my wife describes as "The Siamese Fighting Fish of comics". She needs her own series.

I do love Warren Ellis, but I think this is one of the last long form series he's done that he actually finished.
posted by Marticus at 7:14 PM on August 11, 2019 [1 favorite]

I haven't read this omnibus but I did read the comic when it was being published (frustratingly sporadic). I really loved it at the time and could easily have had more. I think what caught my interest especially were the takes on Doc Savage and Japanese kaiju which had made up so much of the landscape of my childhood imagination. I'll echo that the ending of the series was very rushed and unsatisfactory. Am I right in assuming DC has done nothing further with this setting or these characters?
posted by Ashwagandha at 7:05 AM on August 12, 2019

Be thankful that DC hasn't done anything further with them!

I got into Planetary because of a post on scans_daily on John Cassaday's two-page panels in the series. This series was perfect for the Absolute Editions.

As far as the ending being rushed, how long was it between issues towards the end? If Ellis didn't rush the ending it likely never would have happened.
posted by any portmanteau in a storm at 5:25 PM on August 12, 2019 [1 favorite]

Night On Earth might actually be my favorite Batman story of all time. I’ve definitely wished that someone would smack Zack Snyder upside the head with a copy.
posted by nonasuch at 5:55 AM on August 13, 2019 [1 favorite] 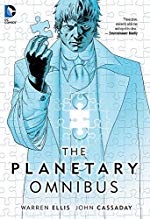