Samuel L. Jackson can no longer abide these detestable serpents on this detestable aircraft.

What’s surprising about Snakes on a Plane is the movie’s commitment to its own schlockiness. It’s not a slick studio vehicle with a few campy nods to old-fashioned B pictures. It actually feels like something that would be playing on network television on a long Sunday afternoon in 1980, interrupted by ads for Ronco kitchen products and starring Vincent Price, Shelley Winters, or Patrick Swayze, or any combination thereof. This schlockiness is owed in large part to the cult following Snakes built up on the Web in the year preceding its release. When the studio realized how hot their cheaply made action flick was becoming even before one frame of it had been screened, they added five days’ worth of newly shot footage, most of it centered on taboo human body parts, with or without snakes attached.

On opening day in New York, groups of the initiated showed up at theatres in a happy mood, whooping and hollering and urging the serpents to do the nasty. Attempting to enter into the spirit of the event, I found myself put off by the slickness of the production. Intentional low camp always seems wrong unless it’s very funny; in trash, one wants clumsiness, even a certain tackiness, and this movie has the production values and the high-tech fluency of a much bigger movie.

[Tyrangiel:] Did you have any reservations about doing reshoots to incorporate some of the fans' ideas?

[Jackson:] Not at all. Personally, I think it's great. They saved the movie. Those were things I was saying the whole time we were shooting, saying that we should shoot them anyway just in case you change your mind. And then they were like, "Well, no, we're trying to keep this PG," so they restricted my cursing and restricted the gore. It was kind of a waste of time. It's kind of like them changing the name of the movie. It's stupid. "Oh we don't want to give too much away." Of course you do! You want people to know they're coming to see people trapped on a plane with snakes. You don't want them to think they're getting on Pacific Flight 121, which might crash. Come on! Give me a break. I mean, they wanted to call it Pacific Flight 121. I told them that was the stupidest damn thing I ever heard.

[Black Flame Publishing] also novelized a couple of borderline New Line horror films which meant by sheer luck they had the rights to the sentient meme Snakes on a Plane. Before I get into the book, let me quickly get my thoughts on the film out. I dig it. It’s a funny riff on b-movie tropes with A-movie production values. It’s incredibly shallow but that’s the point. It’s just a joke. So how did it leapfrog all of the Star Wars/Star Trek/Marvel novelizations to produce the best novelization I’ve ever read? This is entirely on writer Christa Faust, a talented writer who took the opportunity to really go full throttle and make this the ultimate disaster movie.

Every day, the movie became less of a joke and more of a phenomenon, and the camaraderie among fans on message boards and the Snakes on a Blog fan site was palpable. It wasn’t long before the hype crossed over into the mainstream. Suddenly “Snakes on a Plane” was fodder for “The Daily Show” and “The Colbert Report.” Keith Olbermann ran multiple stories about it on MSNBC. Parodies abounded across the Internet. People were getting tattoos of snakes and planes. You could buy T-shirts, mugs and more. I bought the novelization in a Borders (remember bookstores?) shortly before the movie’s release and launched into a lively conversation with the person behind the counter about how excited we were for the release. Seeing the movie in a packed theater during that first weekend was an unforgettable experience.


The line
posted by J.K. Seazer (17 comments total) 4 users marked this as a favorite
I remember this film being much more fun to joke about online than to actually watch. That's not to say that it was bad, quite the opposite actually, which itself was the problem. Having grown up a connoisseur of crappy movies, what disappointed me about Snakes on a Plane was that it was too competently made, which makes it hard to believe in the sincerity of feeling behind the premise. Based on what I skimmed from the Rotten Tomatoes page, it seems there were a lot of reviewers who felt the same way. Fortunately, Samuel L. Jackson, undoubtedly the one person most responsible for making this film a meme and keeping the studio from fucking it up, elevates every scene he's in.
posted by J.K. Seazer at 1:31 AM on September 14, 2019 [3 favorites]

At some point the creators wanted to change the title to "Pacific 514" or some such and SLJ told a news crew that the only reason he took the job in the first place was because of the name, and here we are.

At the time when this bombed, I thought it was a good illustration of how internet power does not equal real life power. Of course, even in 2006, internetting was still a relatively niche hobby. I guess the more that internet usage becomes mainstream, the less that holds true.

Monkey Fighting Snakes on this Monday to Friday plane
posted by Query at 4:54 AM on September 14, 2019 [3 favorites]

I went to go see this on opening night at a packed theater in downtown Chicago and everyone else who was there was there was in the right mood for this movie. There was so much cheering.
posted by phunniemee at 6:30 AM on September 14, 2019 [4 favorites]

The thing I liked best about this picture is that one of the two main bad guys was named Kraitler.
posted by holborne at 7:08 AM on September 14, 2019 [1 favorite]

Yeah I have no idea if this movie was good, but seeing it in a packed college town theater the week it opened was awesome.
posted by showbiz_liz at 8:50 AM on September 14, 2019 [3 favorites]

I think it's major failing is that it's boring. I think the premise in the hands of another director like Alexandre Aja (Crawl, Piranha 3D) but it was just...bland. Poorly paced and unimaginative. They did a whole bunch of reshoots to add in scenes that the internet suggested and they're pretty obvious they were because there was such a tonal mismatch. Kind of like the clash of the Whedon/Snyder bits of Justice League.

You really needed to see it in the first few weeks in theaters with a responsive crowd. Kind of like Paranormal Activity.
posted by Neronomius at 10:50 AM on September 14, 2019 [3 favorites]

It was very much an event movie - the opening midnight showing was packed and none of us really cared how good the movie was, we all just wanted to see Sammy J. yell The Line, and when he did the entire theater clapped and cheered.

Also not to be overlooked is the Cobra Starship song written for the movie. Music video.
posted by reductiondesign at 8:47 PM on September 14, 2019

I went to go see this on opening night at a packed theater in downtown Chicago and everyone else who was there was there was in the right mood for this movie.

Precisely. This was never going to be a movie you enjoyed on its own merits, and going to see it on opening night surrounded by other Internet nerds was the only time that seeing it in the theater made sense. It's like Rocky Horror that way.

I went with some friends and we all each brought "souvenirs" to share - I found some gummy snakes, and another couple saw these little snake hand puppets at the dollar store and got one for each of us. But the couple who had a return flight back to New York that day had the coup - they found a couple of toy snakes in a gift shop at the airport, and they talked someone at the baggage check into putting a luggage tag on each one and then took pictures of the snakes in their seats. Every time SLJ got mad in the film our audience started chanting "Say it! Say it!" and then getting disappointed when he didn't - until the end, when he finally did and there was much rejoicing.
posted by EmpressCallipygos at 5:03 AM on September 15, 2019 [3 favorites]

Seeing this pop up on the Fanfare page reminded me about the flaw in the poster. Look carefully at the bodies of the snakes. Both snake bodies lead back to the same tail - the one that ends over the right vertical stabilizer. Neither snake body leads back to the other one. Once you see it, you can't unsee it, and now I've shared it with you.
posted by Hatashran at 5:57 PM on September 16, 2019 [1 favorite]

I think the right snake is pinning the left snake's body to the right side of the plane. But thank you for making me critically examine the Snakes on a Plane movie poster.
posted by J.K. Seazer at 11:56 PM on September 16, 2019 [2 favorites]

Specifically, on the title:

Jackson publicly endorsed the move. “That’s the only reason I took the job: I read the title,” Jackson told entertainment site Collider.com. He added, “You either want to see that, or you don’t.”

I remember this film being much more fun to joke about online than to actually watch.

The seventeen years between Batman and this represent the early adulthood of a lot of Gen-X types. In the space of a single generation we saw film releases go from a film release where the marketing had more cultural impact than the movie to a situation where actually releasing the movie could only hurt the brand.
posted by ricochet biscuit at 8:39 PM on September 19, 2019 [1 favorite]

I unironically love this movie. This movie knows exactly what it is. It is a movie starring Samuel L. Jackson and Kenan Thompson and is about snakes on a plane. Everything else is irrelevant. Jackson and Thompson (it's really important to me that he gets his due here because he's a big part of the demographic magic) could spend half the movie eating complimentary peanuts and it wouldn't matter as long as Jackson still said the line. It's not a cinematic masterpiece, no, but it doesn't have to be. It does exactly what it says on the tin. It entertains me in just the way I expect to be entertained by a movie starring Samuel L Jackson and Kenan Thompson about snakes on a plane.
posted by Ruki at 3:28 PM on September 22, 2019 [1 favorite] 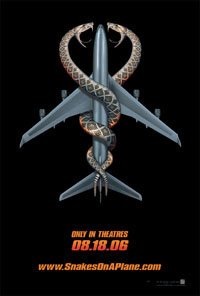