Space: the final frontier. These are the voyages of Jason Voorhees, a rapid-healing mutant intent on reinforcing 1950s sexual propriety by any means necessary. Where "any means" reduces to "with a machete."


This is the best Jason movie because:

•It leans hard into Jason being basically Wolverine, but choppy.
•It has a cameo from David Cronenberg
•Jason wakes up because people are fucking nearby and he WILL NOT HAVE IT SIR
•Frozen headsmash buffalo jump
•We love premarital sex!
•Peter Mensah riding Jason down into the atmosphere in what I hope is a callback to Dark Star
•Kane Hodder's last outing as the definitive Jason
posted by GCU Sweet and Full of Grace (9 comments total) 3 users marked this as a favorite
This is definitely my favourite "bad" horror movie to recommend people. My partner and I went through a whole Friday the 13th marathon a few years ago and by the time we got to this one we were bored and a little burnt out and the reputation of this one had us pretty wary. But the pacing is great, it's ridiculous but takes itself seriously enough and is just a great time.
posted by Neronomius at 10:44 AM on September 14, 2019 [2 favorites]

Maybe we should drag this one out at MST Club, although I've seen it before and there are some questionable comic moments. ("I gave her an upgrade" comes to mind.)
posted by JHarris at 10:44 AM on September 14, 2019 [3 favorites]

When I watched it with some friends years ago, we found it a mixed bag, but everyone was very charmed by the idea that a group of scientists descending to the blasted Earth to carry out an experiment would choose to bring Jason back to their space station and resurrect him. How did they get that past IRB? What were they trying to prove? You think that the smallest amount of research would have told them what was going to happen...
posted by GenjiandProust at 11:02 AM on September 14, 2019 [5 favorites]

Jason is probably considered to be one of those urban legend things at best. I mean, parents willingly sent their kids to Camp Crystal Like for, what, decades? No one seriously believes in Jason, they think he was just made up by the retail industry to encourage kids to stay home and mallwalk over the summer.
posted by JHarris at 11:11 AM on September 14, 2019 [3 favorites]

This is definitely my favourite "bad" horror movie to recommend people.

I love this movie, but I think it's a little too intentional to put in that category, especially when it's lampshading its own tropes. I'd put it on the edge between regular horror movies and horrorcomedy like Slither or Tucker and Dale vs Evil.

It's something different from Attack of the The Eye Creatures or Species 2 (which is only good for an amusing hatewatch), is all.
posted by GCU Sweet and Full of Grace at 11:43 AM on September 14, 2019 [3 favorites]

I loved this one. Haven't seen it in forever, but I remember the whole thing being a blast.
posted by mordax at 1:31 PM on September 15, 2019

Hey, you're lucky you weren't alive during the Microsoft conflict. Hell, we were beating each other with our own severed limbs.

Lou, I swear, you mess with an engineer, you'll end up with a waste hose in your bunk.

The same guy who wrote Drive Angry, which has the same muscular plotting and wild sense of humor, although this one gets points for having a space marine die on a giant drill bit and then having his superior officer scowl at his corpse and say "he's screwed."
posted by maxsparber at 8:28 AM on September 17, 2019 [1 favorite]

Just watched this with the kiddo who loved it and laughed in all the right places.
posted by DirtyOldTown at 8:33 PM on December 27, 2021 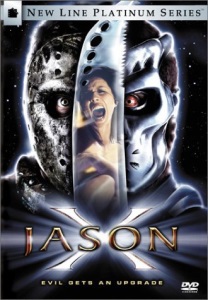