From G. Willow Wilson (Ms. Marvel). Set in 1491 during the reign of the last sultanate in the Iberian peninsula, The Bird King is the story of Fatima, the only remaining Circassian concubine to the sultan, and her dearest friend Hassan, the palace mapmaker. Hassan has a secret--he can draw maps of places he's never seen and bend the shape of reality. When representatives of the newly formed Spanish monarchy arrive to negotiate the sultan's surrender, Fatima befriends one of the women, not realizing that she will see Hassan's gift as sorcery and a threat to Christian Spanish rule. With their freedoms at stake, what will Fatima risk to save Hassan and escape the palace walls?
posted by dinty_moore (3 comments total) 2 users marked this as a favorite
I really loved the writing and the way the setting unfolded. Sometimes the parallels were heavy handed (I laughed when the Sultan literally said "they hate us for our freedoms"), but it at least grazed on a half dozen interesting concepts. A lot of the reviews have complained about the pace being too slow - I think mostly referring to the second act on the road, but I didn't really notice anything while reading.

I'm not sure how I feel about Fatima as a character - a good amount of the first act is about her temper and that doesn't go away, it's just that she's put in a different context where it's seen as more of an asset (which, fair enough). The resolution around her codependent relationship with Hassan felt rushed - it would have been nice if she actually seemed to form any stronger bonds with any of the new characters in the last third of the book. I don't know if she ever learns that emotional intimacy is okay? I did like Hassan, and I liked how well Lux worked as a villain.

Also, I'm conflicted over the ending - does Fatima step down from power at the end? It's one thing to say 'we're all the bird king', but, like, if there's one autocrat on the island, it seems like someone is more bird king than others. And I think I'm supposed to feel a little disquieted over the nameless deaths at the end - after all, this whole thing started off to save one life - but yeah, I'm disquieted by then.
posted by dinty_moore at 4:53 PM on October 22, 2019 [1 favorite]

Just started reading this, so I'll be back once I've finished. I really liked Wilson's previous book, Alif the Unseen. I'm not immediately gripped by it, and find the slight disconnect between the light writing style and some fairly heavy stuff both disconcerting and intriguing. More later.
posted by tavegyl at 8:55 AM on October 24, 2019 [1 favorite]

I finished it over the weekend. I have somewhat mixed feelings, but come down on the negative side. I found the pace of it enjoyable, including the bits on the road, and generally the plotting and so on was engaging. I liked the idea and depiction of the island but was disappointed by its resolution -- given Wilson's rather on-the-nose contemporary references (like the 'they hate us for their freedoms') I'm surprised she didn't do more with the refugee boats sailing across the Mediterranean. I would have thought that could have given some weight to the book, since with the fall of Granada the refugee flow would have been the other direction.

I didn't find any of the characters, or their relationships believable or even interesting. Fatima lost me pretty early on by telling Luz about Hassan's abilities after seeing her kick a dog (leaving aside what a cliched way to establish Evil that is). I can't imagine one could survive in a harem by being so politically naive. I agree with you, dinty_moore, I didn't find the resolution of her relationship with Hassan particularly convincing either, and was also confused by the ending about the bird king. It read to me like Wilson had two different ideas about how the story could end, and decided to put them both in.

Actually, I think that's at the heart of my dissatisfaction with the story, and I even touched on it in my comment above, when I was only a few pages in. Wilson has lots of big ideas that she crams into the book but never actually commits to any of them.

I was also a bit weirded out by the jinn being named Vikram. Maybe it's because I'm a South Asian Muslim so there are a lot of history and resonances for me, but giving a Hindu name to someone who is clearly depicted as demonic and inhuman, no matter how sympathetic, made me uncomfortable.
posted by tavegyl at 8:55 PM on October 28, 2019 [2 favorites] 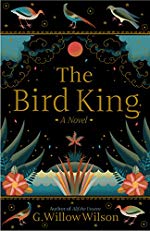