The follow-up to Tana French’s bestselling debut In the Woods finds Detective Cassie Maddox shaken from the events of a dangerous murder investigation and working a desk job in Domestic Violence at police headquarters in Dublin, Ireland. She’s just settling into her new suits and a quieter, if less satisfying, life when she is called to the scene of a murder. Cassie looks at the victim, stabbed in the chest and left for dead in a ramshackle rural cottage, and finds her mirror image. Identification reveals the victim’s name is Lexie Madison—the very same handle Cassie once used as an undercover agent.


This book requires one large suspension of disbelief.

My favourite review of it, from the NYT:

The usual sequel takes characters from an established book or series and then moves them on toward new adventures. But “The Likeness,” Tana French’s second novel, has a much tighter bond with its predecessor. Her first book was the Edgar-winning “In the Woods,” in which a police detective named Cassie Maddox took on an undercover role. Cassie became a college student named Alexandra Madison in the course of a long investigation that left Cassie with stab wounds and nightmares.

When you pretend you have read the first book based on misleading clues from the second.
posted by jeather (11 comments total) 4 users marked this as a favorite
It’s been a while since I read this, but what I remember enjoying was the well-described group dynamic and the sense of place in the description of the house.
posted by bq at 2:06 PM on November 1, 2019

On the TV series, the instant the students' house was shown on the screen, entirely without any context, I knew exactly what it was. It was precisely how I had pictured it, though I have no cultural experience or architectural knowledge that might have given me clues. It's like I'd already seen it. I read these books four years ago, I think, and I find as I watch the show I don't remember key events. But I recognized that house.

It was unnerving. As bq says, French's evocation of place was uncanny. Even better than the estate and woods of the first book.

I've read all of these books, excepting the second half of The Secret Place, and IIRC they each require a big suspension of disbelief. I stopped reading The Secret Place when it included a small bit of the supernatural. I read fantastical books all the time; but I'd been reading the Dublin Murder Squad books as typical genre police procedural mysteries and I guess I'm sensitive to knowing in advance the basic parameters of the extent of realism/verisimilitude. I had a very strong negative reaction -- I was actively angry at the author -- but even at the time my own reaction/feelings didn't sit right with me. I suspected that generally I needed to more carefully consider my thoughts on this sort of thing; but, also, I suspected I'd been misinterpreting these books all along.

She flirts with the supernatural from the first book onwards. More than that, though, is that these books are metacommentary on genre and genre tropes. There's a pattern in what she's doing. That it's hard to believe in this doppelganger and how contrived this all is -- well, this is a feature, not a bug.

BTW, French includes many Americanisms that surprised me and seemed out-of-place. There's a use of the idiom "a house in the Hamptons", for example. This was frequent enough I wondered if I were reading versions edited for American audiences. I posed this question to her on a Goodreads "ask the author" opportunity, and she said it's how she wrote it and the Irish have picked-up quite a few Americanisms. I read quite a few UK books and I don't see nearly as much of this, but apparently Ireland pop media culture assimilates more American pop culture than does the UK.
posted by Ivan Fyodorovich at 8:08 AM on November 2, 2019 [1 favorite]

BTW, French includes many Americanisms that surprised me and seemed out-of-place.

There are a lot of Americanisms because she is an American. I've noticed fewer in Faithful Place, which is what I'm reading right now (and possibly not finishing), so I'm assuming her ear for Irish dialogue has improved over the years.

I'm one of those readers who just could not suspend disbelief enough to get into The Likeness. I'd felt lukewarm on the the first book (too many Americanisms, a murderer so obvious it makes the detective seem stupid), but I was excited for a book with Cassie as the main character. Even though the premise annoyed me so much that it took me nearly 10 years to give Tana French another try, I loved the romance plot, in fact, this is one of the very few mystery novels where the romance worked for me and I was surprised when I got online and everyone was complaining about it.
posted by betweenthebars at 10:41 AM on November 2, 2019

Well, she lived for a time in Ireland as a child, attended Trinity, and has long lived in Dublin so my assumption was that although some Americanisms would be in her idiolect, she'd have a good ear for Irish dialogue, not to mention alpha-readers, friends, and editors, many of whom are presumably Irish. It's not like she's an American who visited Dublin and writes books set there. That's why (after researching her history) the whole thing puzzled me. I have no personal experience to judge, she clearly has quite a bit, and there were a few Irish commenters in response to my question who supported her claim that Americanisms are relatively common in Dublin.
posted by Ivan Fyodorovich at 10:51 AM on November 2, 2019

I loved this book also. I didn't know people hated the romance, which was not really a lot of the story. What I liked, especially, was the focus on choice: how choosing one thing ends up meaning you are choosing not the other, and how very coldhearted it can seem, to look at those consequences and those shut doors and say yes compared to pretending otherwise.

I do know a lot of people couldn't get past the premise, which is fair. (I dislike the more magic bits, and I disliked The Secret Place because it was too much magic for me: I like magic.in books, and in mysteries, but I don't like this weird half level of it. I don't consider the double magic, just one of those unlikely coincidences you need to start a story.)
posted by jeather at 11:41 AM on November 2, 2019 [1 favorite]

I love Cassie and was so happy to see this book from her perspective after Rob’s crap in the first book.

When you pretend you have read the first book based on misleading clues from the second.

I didn't know people hated the romance, which was not really a lot of the story.

Back when I read the book, there were a lot of complaints because Cassie didn't end up with Rob. I'm usually into love interests that are objectively the worst, your Rochesters and Maxim de Winters, but Rob? Nope.

I've been trying to figure out why the premise of The Likeness was such a dealbreaker for me when I can accept the high murder rate in Three Pines and everything Fred Vargas. I think my problem is that it takes itself seriously and is aiming for psychological realism. The more realistically the characters are written, the less believable the plot becomes to me.
posted by betweenthebars at 9:44 AM on November 3, 2019 [1 favorite]

Yes, I also couldn't deal with the plot of The Likeness. The idea that someone could just insinuate herself into a close-knit group of friends like that and pretend to be one of their intimates for such an extended period never sat with me. It was still a really enjoyable book to read though - I loved the characters of each of the group, the dynamics she described. It felt like one of graduate coop houses I encountered only better.
posted by peacheater at 4:43 AM on November 4, 2019

I agree that this book requires a big buy-in for the premise. I was willing to roll with it, and found it very engrossing. But then, I'm one of the people who doesn't at all mind the bit of genre mixing these mysteries do. I love a bit of unexpected genre shift, and I tend to think this series' use of unreliable narrators buys it some wiggle room on the including weird/spooky stuff front. I also really liked the whole doppelganger angle as a meditation on and examination of going undercover and identity. Using an improbable/weird/speculative scenario to dial up the stakes and sharpen the focus on something real is, I think, a thing French borrows from scifi/fantasy, and I enjoyed this take on it.

Also, I watched Due South. Cassie going undercover as Lexi is still about 5000x more probable than the Ray V to Ray K switch in Due South.
posted by yasaman at 10:02 AM on November 4, 2019 [1 favorite]

I found the premise completely ludicrous.

Also, I felt like the first book was heavily indebted to The Secret History, albeit in a good way - very (very) similar in prose style, slowly building sense of dread, main character / narrator hinting at some (perhaps literal) demons as he slowly goes off the rails - but with a sufficiently different setting and sufficiently distinctive characters that I felt it was something new and fun.

In the second book she just straight-up steals the entire cast of characters from TSH (the Henry rip-off is especially egregious) and puts them in a big old country house like TSH with a web of simmering sexual and interpersonal tension like TSH and a shared secret about the murder of their friend like TSH and has the main narrator repeat similar insights about how, after it all went wrong, she’ll always wax nostalgic about the house full of eccentric poshos who all seemed destined to live together forever like the TSH.

It’s straight fanfic and I feel Donna Tartt could probably sue.
posted by chappell, ambrose at 6:31 AM on November 6, 2019 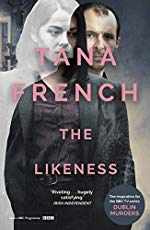