The screenwriting and directing debut of Jon Stewart tells the story of a journalist held in captivity in Iran, on suspicion that he is a spy.

In 2009, London-based Iranian-Canadian journalist Maziar Bahari (Gael García Bernal) was detained in Iran for 118 days because of a satirical interview he gave regarding the country's presidential election. Bahari was arrested and, while his pregnant fiancée waited for him, spent four months at Evin Prison being brutally interrogated. The film suggests his video evidence of the protests he provided to the BBC was the actual reason for his incarceration.

Bahari was usually blindfolded when being interrogated, and the sole distinguishing feature of his interrogator was that the interrogator smelled of rosewater.

I have seen this movie referred to (only partially jokingly) as "the movie that made John Oliver a star." (Oliver guest-hosted The Daily Show while Stewart was away making this film, and he was so good at it that HBO offered him his own show, which is now a huge hit.)
posted by jbickers (1 comment total) 1 user marked this as a favorite
I saw this over the holiday. I already knew the backstory but I enjoyed it a lot on a number of levels. One thing I noticed was a number of imaginative & innovative uses of CGI overlays in a way that added to the narrative. Hard to describe but if you've seen it you know what I mean. The movie also continued to inform my understanding of Iran as much more than a monolithic culture of religious fanatics. Worth seeing.
posted by scalefree at 4:10 PM on December 2, 2014 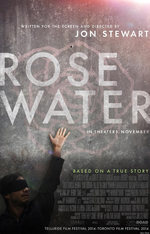