Anne of Windy Poplars tells the story of the three years between Anne Shirley's graduation from Redmond College in Anne of the Island and Anne and Gilbert's marriage in Anne's House of Dreams.  It was written in 1936, almost 20 years after House of Dreams was published.


"While Gilbert is in medical school, Anne takes a job as the principal of Summerside High School, where she also teaches. She lives in a large house called Windy Poplars with two elderly widows, Aunt Kate and Aunt Chatty, along with their housekeeper, Rebecca Dew, and their cat, Dusty Miller.

During her time in Summerside, Anne must learn to manage many of Summerside's inhabitants, including the clannish and resentful Pringle family, her bitter colleague Katherine Brooke, and others of Summerside's more eccentric residents. Additionally, Anne befriends the young and lonely Elizabeth Grayson, a motherless member of the Pringle family who lives next door to Windy Poplars."

This book is the first in the series to include much epistolary content, as it includes some of Anne's letters to Gilbert (with redactions for romance).

Child-like wonder is supplied by Anne's neighbor, Betty, Betsy, Lizzie, or whoever she is at the moment.

You may have wondered what a 'Wandering Jew' is - it's a plant.

Mr. Adoniram Gibson was Pauline Gibson's father.  Apparently "Means "my lord is exalted" in Hebrew. In the Old Testament this is the name of an overseer of tribute under the kings David, Solomon and Rehoboam. He was stoned to death when the Israelites revolted."

"iceberg and nutmeg grater combined" is a great insult.

"It’s impossible to think of Canada ever being at war again. I am so thankful that phase of history is over." - LMM must have written this with the shadow of war hanging over Canada.  She knew what was coming.

A '3 clawed contraption' to hold somebody's head still is mentioned in the text - here's an example.

A huge number of boarding houses (and a 'bachelor hall' is also mentioned)in Windy Poplars.  It seems every third house has a room 'to let'.  This doesn't seem to happen any more and it seems like a big gap in the housing market.

When I started this book I thought I hadn't read it before!  But then Anne found the antique log book with the cannibalism anecdote in it and it all came rushing back.  The scene of the two Pringle ladies coming to wait on Anne stuck in my head for 30 years, although the rest of the book fell right out.
posted by bq (12 comments total) 3 users marked this as a favorite
Cooking was a full-time job back in the days when nearly everything had to be made from scratch, and it wasn't feasible to cook and keep house for yourself if you had to also earn a living, especially when jobs typically involved 60 hours of work a week back then. It used to be that single people with low to middling incomes always boarded. A single person would only have their own house/apartment if they had the means to also hire at least one servant to cook and clean for them, and sometimes they boarded even if they could afford to set up their own household, because it was easier. Back in Victorian times even many married couples boarded, because many people didn't have the kind of nest egg it would take to buy all the furniture and equiment you'd need to set up your own home, and/or sometimes the wife wasn't in good enough health that she could undertake the housekeeping.

When Anne and her friends were renting Polly's Place in Anne of the Island, they had a housekeeper who would have done at least some of the cooking and housework, though of course the girls all did at least some chores. With five women to split the work, it wouldn't have been too onerous.

Polly Milton of Louisa May Alcott's An Old-Fashioned Girl, who was supporting herself as a music teacher, rented a room from her landlady, who also provided her with dinner (the noon meal). Polly got her breakfast and supper herself, and the things she is described as eating were very simple things she could buy or cook over the fireplace in her room: bread and milk, tea or toast, or apples she could roast over the fire.

And yes, many people let their extra rooms as a source of extra income, even reasonably well off people. L.M. Montgomery's grandparents, who raised her, always boarded the Cavendish teacher, and they weren't poor. It was no bad thing to board a professional such as a teacher, minister, or a doctor. Many widows turned their homes into boarding houses as a way of earning a living after their husbands died. Aunt Kate and Aunt Chatty kept a boarder in order to be able to pay Rebecca Dew.

These days there are such things as rooming houses where you rent a bedroom and share facilities with others in the house (I lived in one myself for 5 years in my twenties), but it's something very poor people do.

Happily engaged Anne does a lot of matchmaking in this book. I wish she'd fixed up the clearly gay Katherine Brooke with someone worthy of her, but at least she gave her a makeover and encouraged her to get into a different line of work that she liked.

This book contains a line that gets my vote for Funniest Line Montgomery Ever Wrote. It's from the chapter in which Anne visits Miss Minerva Tomgallon and inclement weather forces her to stay the night. Miss Minerva shows Anne to a guest room, and says:

"I hope you’ll be comfortable, my dear. Mary has aired the bed and put two hot bricks in it. And she has aired this nightdress for you . . .” pointing to an ample flannel garment hanging over a chair and smelling strongly of moth balls. “I hope it will fit you. It hasn’t been worn since poor Mother died in it."
posted by orange swan at 5:58 PM on November 19, 2019 [9 favorites]

I'm curious where this comes from. I do remember Katherine saying something like "not that I want a lover--I hate men--but . . . " but she strikes me as asexual more than gay. She's happy with fulfilling work (eventually, once she stops teaching) and her dog.
posted by dlugoczaj at 7:04 AM on November 21, 2019 [1 favorite]

I love the scene where she's having dinner with the family with the sulky father and they all say more and more preposterous things to try to goad him into speaking. And the one where she goes to tell the supposedly strict father that she helped his daughter elope, only to find out that's what he wanted all along.
posted by Daily Alice at 8:21 PM on November 21, 2019 [1 favorite]

I hated this book so much because Anne and Gilbert were finally together and I really, really wanted to read the romantic stuff. Not only do they not see each other, not only is it epistolary, they cut the romantic stuff out like it was a William Goldman book. I didn't give a damn about the stupid Pringles and the entire book was the damn Pringles. It made me mad. Worst book of the series as far as I'm concerned. LMM at least redeemed herself by getting back to the love in the next book, but man, this book disappointed me so damn much. This was NOT what I wanted at the time.

I don't know, I think reading reams of mushy love letters would be kind of boring. What I do wish, although it would have made the book twice as long, is that she had included Gilbert's letters back to Anne, with lots of fun quirky details about early-twentieth-century medical school and the funny characters he met.
posted by Daily Alice at 7:44 AM on November 26, 2019 [3 favorites]

As a kid I was also super annoyed at the redacted letters, but revisiting this one a few years ago I really enjoyed it! The Tomgallons especially. I also love the line about the nightgown.
My friend and I once made the 36-egg pound cake from the fateful Pringle recipe...and my friend actually made a food concordance for the entire series! In case you want to seriously nerd out.
posted by exceptinsects at 9:35 AM on November 26, 2019 [5 favorites]

I've read that katherine is based on a woman who was obsessed with LMM, who wrote extensively about her in the journals.

the north hollywood library didn't have copies of anne of avonlea or anne of the island in the early 80s; I found it very confusing to see anne writing love letters to Gilbert.
posted by brujita at 10:45 PM on November 27, 2019

Katherine Brooke wasn't based on a woman who was obsessed with Montgomery. It is the shallow and empty-headed character Hazel Marr (who has a "notorious crush on Anne", and gushes about how much she adores Anne) who was based on Isabel Anderson, an elementary school teacher from Acton, Ontario. Isabel, who had a behavioural pattern of becoming obsessed with unavailable/uninterested men such as her married minister, was obsessed with Montgomery for years, and Montgomery let their strange friendship drag on from 1926 until her death in 1942.
posted by orange swan at 4:56 PM on December 2, 2019 [1 favorite]

iirc hazel is vivacious, which is not how isabel is described in the journals.
posted by brujita at 9:03 PM on December 2, 2019

It wasn't a wholesale transcription, i.e., Hazel was also a beauty, and very vain, and Isabel was not. It seems to have been Isabel's immature way of gushing, fawning, and dramatizing herself, and then chastising Montgomery over letting her down in some way, that Montgomery used to create Hazel.
posted by orange swan at 11:08 AM on December 3, 2019 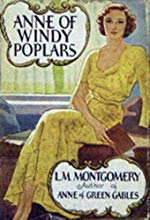