#1 NEW YORK TIMES BESTSELLER • “A big sweeping novel of friendship and marriage” (The Washington Post) by the celebrated author of The Prince of Tides and The Great Santini   Leopold Bloom King has been raised in a family shattered—and shadowed—by tragedy. Lonely and adrift, he searches for something to sustain him and finds it among a tightly knit group of outsiders. Surviving marriages happy and troubled, unrequited loves and unspoken longings, hard-won successes and devastating breakdowns,...


Set in 1969 and 1989, South of Broad is essentially a love letter to Charleston. Unfortunately, the city of Charleston is probably the best developed character in the book. There are chunks of brilliant writing in the book - the love story between Leo's parents, the SF trip, and Hurricane Hugo. However the characters are more like caricatures than real people. We get the dutiful Catholic would rather stay in a miserable marriage, because Catholicism. We get the privileged rich girl who would rather stay married in her mansion to her philandering husband than find happiness, and we have the flamboyant sex obsessed gay gay who has AIDS, because of course he does.

I read it primarily because Anthony Bourdain's website recommended reading it before visiting Charleston, and we are visiting Charleston after Christmas. I think our hotel is just North of Broad, so I'm looking forward to exploring the area and connecting it with the book.
posted by COD
« Older The Expanse: All Episodes...   |  Star Trek: Enterprise: E²... Newer » 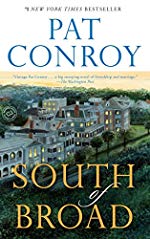