Little Billy witnesses his parents being brutally murdered by a man dressed as Santa. Years later, when he has to fill in for an absent in-store Santa Claus, he snaps.


Silent Night, Deadly Night outgrossed Wes Craven's landmark slasher A Nightmare on Elm Street, which opened the same day. Despite a financial success the first week, protests and the castigation of Siskel and Ebert led Tristar to abandon SNDN before West Coast distribution.

While boasting a controversial release, the film was popular enough to spawn 4 sequels including Silent Night, Deadly Night: The Toymaker with Mickey Rooney.
posted by miss-lapin (7 comments total) 1 user marked this as a favorite
Must be good, Mickey Rooney would never do anything just for cash.
posted by Chrysostom at 7:01 PM on December 15, 2019 [2 favorites]

I should add SN DN has Linnea Quigley being impaled on antlers while topless. For that alone it's worth a watch.
posted by miss-lapin at 7:23 PM on December 15, 2019 [2 favorites]

I think when you say, "Linnea Quigley" the topless part is already assumed.
posted by Chrysostom at 7:45 PM on December 15, 2019 [3 favorites]

It is a really funny watch if you like gore, in a Terrible Movie way but also in a "hey, it's not much worse than any other 80s slasher flick" way. Also, Robert Brian Wilson is pretty hot when he's not strangling people with holiday lights.

The extras on the remastered release from a couple of years ago dig into the backstory and ridiculous controversy. miss-lapin's Vulture link gives a good feeling for just how pissed off parents across America were when this came out, with ads running during family-friendly football (Wikipedia says Three's Company and Little House on the Prairie,, too). And the self-righteous fury of that Siskel and Ebert clip is something to see. Siskel almost laughs when he describes what causes Our Hero to finally snap, but then catches himself and remounts the high horse.

Even just the posters of Santa's arm going down a chimney with an axe were apparently too much.

Anyway, it's a bloody mess worth watching if you're partial to Christmas camp.
posted by mediareport at 8:04 PM on December 15, 2019 [1 favorite]

The thing that Vulture also points out is that this movie had almost the same plot as Christmas Evil, which came out in 1980. And yet that film didn't face controversy and boasts a high rating on Rotten Tomatoes. It's true it's a better made and written film, but it still has a killer santa claus if that is indeed the problem.
posted by miss-lapin at 8:26 PM on December 15, 2019

Yeah, in interviews the creators mostly say the force of the backlash took them by surprise, since cheap slashers were fairly normal by that point. For whatever reason *cough* Siskel & Ebert *cough* the controversy had legs that killed this particular release.
posted by mediareport at 8:36 PM on December 15, 2019 [1 favorite] 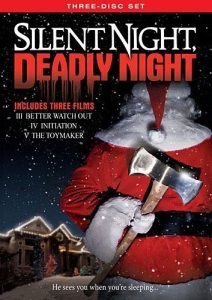