The story of the life of one David Copperfield (of a constantly modulating name) from birth to adulthood and the numerous characters and events he encounters along the way.


I saw this last night at a preview with a Q&A with Armando Iannucci following - it is tremendous fun, almost a conscious repudiation of the Recent Stupidity that has marked current affairs across the world.

Iannucci has taken pains to flesh out the characters (particularly to address the tendency of Dickens' women to be either mad or dull), changed the novel slightly to make it more manageable and tie it in with Dickens' own life (for example, the wine merchant of the novel becomes a blacking factory). Although it is effervescent (and beautiful to look at), it's noticeable that many of the characters are suffering from one form of mental illness or other, something that tends to humanise undoubtedly entertaining caricatures - there's a wonderful humanity to Hugh Laurie's bewildered Mr Dick, or Benedict Wong's dipsomaniac Mr Wickfield, and in general there's a humanity in the film that extends even to Ben Whishaw's Uriah Heep, the ostensible villain.

It is certainly a world away from the rather dull, staid, Dickens adaptations that have popped up over the years.

The thing that will be most discussed, at least for a while, is the fact that the casting is properly colour-blind, as has been widely practised in the theatre for decades: Iannucci said that his first instinct on completing The Death of Stalin was to make David Copperfield, then that he wanted Peter Capaldi to play Micawber, then that Dev Patel was his ideal Copperfield, and at that point the colourblind casting was the only logical way to do it, which would allow him to choose any actor to fit their roles. This has certainly paid off - the cast are pitch perfect.

Anyway, it's fab. I think so, anyway.
posted by Grangousier (4 comments total) 4 users marked this as a favorite
It was really good.

Dickens is one of the few writers where I can absolutely understand why he is a great writer and what makes him so without actually enjoying his work all that much. I like A Christmas Carol, and thought Bleak House was OK, but I have never really liked anything else I've read by him.

However, I thought this movie was excellent both at bringing out the best of Dickens -- like his social conscience, his sense of humor, and his ability to turn a marvelous phrase and characterize someone to the core in a single pithy sentence -- and also adding its own wonderful touches, like the metatheatricality of the narrative. I also appreciated the agency it gave to the female characters, the lack of which is often one of Dickens' flaws.
posted by kyrademon at 12:45 PM on January 25, 2020 [1 favorite]

This finally dropped on HBO last night (in the US), and my goodness was it worth the wait. Funny turn for Iannucci to go from the dark and very sweary work he's done most of his career, and to go to a very bright and cheery (and kid-friendly) Dickens adaptation. You'd say it would be a big risk, but a risk that very much paid off. The cast is absolutely stacked. You get Dev Patel being superb and delightful in the title role, Gwendoline Christie gets to chew up the scenery as Jane Murdstone, Tilda Swinton getting much more to do than I remember from the book, and it may be the only film that could possibly contain both Peter Capaldi and Hugh Laurie. It's also a pretty kid-friendly affair, although at two hours long, it may run a little long for some kids.
posted by General Malaise at 9:19 AM on May 16, 2021

This was excellent! What a joyous romp. I’m impressed by how Iannucci managed to compress the story into such a short time frame and yet we still get an excellent sense of each of the characters. Mr. Dick, Peggotty, Agnes, Aunt Betsey, the perpetually insolvent Micawbers—they are all so sympathetic.

I disliked Steerforth and felt no sympathy for him, though I suspect I was meant to feel a bit sorry for him.

Anyway, as kyrademon says, this movie captures the best of Dickens while leaving out the tedious stuff. It almost makes me want to read the book. Almost.
posted by hurdy gurdy girl at 11:42 PM on March 5

I actually really disliked it, and I wasn't expecting to. Somehow most of the characters, including DC, came off as unlikable and completely lacking in the humane gentleness that I remembered from the book, and which was my primary memory of it. (I read it a very long time ago, so I might have a different reaction if I read it now.) The one thing I was kind of impressed by was the way Dora was dealt with in the end; it was simultaneously effective and affecting and assholish. Memorable, either way.

I remember thinking that DC is not a good book to adapt into a movie and that a series would have been a better fit, but mostly that this felt more like Iannucci than Dickens.
posted by trig at 8:55 AM on March 6 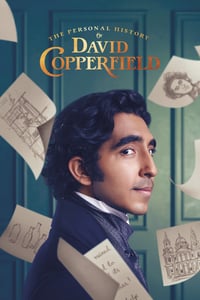