This "historically engaging and pressingly relevant" biography establishes Shirley Jackson as a towering figure in American literature and revives the life and work of a neglected master. Still known to millions primarily as the author of "The Lottery", Shirley Jackson (1916-1965) has been curiously absent from the mainstream American literary canon. A genius of literary suspense and psychological horror, Jackson plumbed the cultural anxiety of post-war American more deeply than anyone.


I've now read this book twice, the second time much more closely as to the details of her life and writing. She was aware of her "witch" image, and used it to promote her work, but she was also aware that it overshadowed and trivialized her craft. Her marriage also overshadowed and trivialized her writing (even while she supported her family financially) and tormented her into agoraphobia. A majority of contemporary critics found it puzzling that she could write intense psychological suspense/horror at the same time as blithely comedic takes on family life and domesticity. But, they came from the same source-- her profound feeling of entrapment in the image of wife and mother versus the creative being.

A couple of reviews:
The Guardian
The New York Times
The New Yorker
posted by winesong (4 comments total) 4 users marked this as a favorite
I didn't know about this book so thank you for posting about it.
posted by miss-lapin at 9:14 AM on February 23, 2020 [1 favorite]

Aside from The Lottery, the only book I've read by her is Life Among the Savages which I loved and was laugh out loud funny in parts. I kinda don't want to know the sad truths.
posted by TWinbrook8 at 2:54 AM on February 28, 2020 [1 favorite]

Cannot wait to read this! Jackson has been painfully undervalued as an American writer.
posted by edithkeeler at 4:00 PM on July 21, 2020 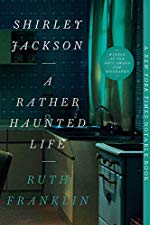