Every great city has a soul. Some are ancient as myths, and others as new and destructive as children. New York City? She's got six.


This novel is an extension of N.K. Jemisin's short story "The City Born Great". When a city becomes big/old/great enough, it picks a human avatar (or avatars) to represent the city and fight off extradimensional Lovecraftian threats; in New York's case, those threats largely assume the form of gentrification, white fragility, misogyny, and police brutality. I'm both excited and disappointed that this is only book one of a planned trilogy -- things are poised to get real weird in book two.
posted by bassooner (9 comments total) 5 users marked this as a favorite
I just finished it, and enjoyed it very much.
posted by sarcasticah at 12:05 PM on May 3, 2020

Is it much of a cliffhanger? I loved "The City Born Great," but am trying to decide if it's worth waiting to start reading this before the others come out.
posted by pykrete jungle at 11:53 AM on May 4, 2020

Not a cliffhanger. I'm assuming that each book will focus on the story of a different city, and New York will be a side character in the next book.
posted by umber vowel at 12:19 PM on May 4, 2020 [2 favorites]

Agreed. Not a cliffhanger at all, and a very satisfying ending. As someone who lived in both Brooklyn and Jersey City, I found this book thoroughly enjoyable.
posted by Ben Trismegistus at 2:08 PM on May 4, 2020 [1 favorite]

As a correction to my guess above: Jemisin says the entire trilogy will be focused on New York. She also talks about the Lovecraft connection. (Both in the full audio of the interview, not in the text excerpts.)
posted by umber vowel at 10:51 AM on May 17, 2020 [1 favorite]

Oof. I was really excited for this because I couldn’t imagine a Jemisin novel I didn’t love, but I really didn’t enjoy this book. Part because I think I just don’t care for this type of fantasy story that takes place in a real present day (ish) location (can’t suspend my disbelief I guess?). But I also found the writing/narration style completely different from any of her other novels that was just really hard for me to connect to. I like the overall story well enough, and the themes, and (many of) the characters, but just... hated reading it.
posted by obfuscation at 1:52 PM on May 17, 2020

I came away with mixed feelings about it. On the one hand, her invocation of Lovecraft explains where she was coming from with this story: imagine The Shadow Over Innsmouth except that's it's white people being characterized as monsters rather than Portuguese fishermen. It's the sort of transgressive idea that makes for thought-provoking horror fiction.

On the other hand, the characters didn't seem particularly well-developed, in comparison to her Fifth Season. It makes me wonder if The City We Became was originally pitched as a streamed series or comic book, like her Far Sector.
posted by SPrintF at 9:15 AM on July 3, 2020

I love Jemisin's work (Broken Earth 4EVA), but only liked this ok. I definitely enjoyed reading it, but something about the pacing felt off? My experience was that things spend a long time developing, and then resolve quickly. Not in-story time, but on-page time. I kind of wanted the setup compressed and the payoff extended.

Thematically it's fun to have whiteness encoded as explicitly evil, and I dig the premise a lot. I'll definitely read more in this world when the books come along.
posted by that's candlepin at 11:23 AM on July 10, 2020

Yeah, I'm generally on the 'it was okay, but definitely not her best' camp. I don't know how much of this is how much I definitely wasn't in the mood for New York solipsism* - I put down the book for a week after the reference that New York was apparently the only city with a personification in North America, and immediately felt defensive on behalf of Mexico City.

But the mystery of Manny intrigued me - though it may or may not ever be solved, because there's something to be said about whoever he was before being ultimately not important. Jersey City being the 'real' fifth makes a lot of sense, and also Staten Island felt right. Brooklyn's constant 'Oh, you wouldn't know about that, you're new' didn't really ring true to me - for one thing, most of the stuff she was explaining is stuff that's in general American cultural knowledge, for another, New Yorkers definitely tend to assume that you know everything about their city. I found Bronca interesting, too - especially since she has a bunch of moments where she seems like she was raised culturally with other Lenape, but also like she grew up being the only Lenape family she knew. Did she reclaim her heritage when she got involved with AIM? Did her parents focus on making sure she had a strong connection? Also, realizing that if she was talking about being at Stonewall, the youngest she probably could be is 68, and that's putting her as way underage.

The lovecraftian parts felt eh to me (I think I've just seen too many lovecraftian takes in urban fantasy/horror lately), but gentrification and Whiteness being the big bag felt right, too.

I'm not necessarily hankering for the next book right now, but I'll probably get around to reading it.

*this feeling brought to you by trying to explain why it's shitty to say that people in the Dakotas don't have to worry about Covid because it's so remote to two separate groups of New Yorkers, only to have them get defensive because how were they to know about something outside of New York. . . and also I'm from Chicago
posted by dinty_moore at 7:05 PM on November 16, 2020 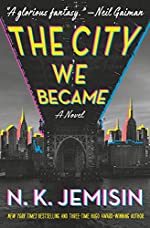