• “And Now His Lordship Is Laughing”, by Shiv Ramdas
• “As the Last I May Know”, by S.L. Huang
• “Blood Is Another Word for Hunger”, by Rivers Solomon
• “A Catalog of Storms”, by Fran Wilde
• “Do Not Look Back, My Lion”, by Alix E. Harrow
• “Ten Excerpts from an Annotated Bibliography on the Cannibal Women of Ratnabar Island”, by Nibedita Sen

This is the first post in the 2020 Hugo Award Club.  You can find the complete posting schedule here.
posted by dinty_moore (3 comments total) 7 users marked this as a favorite
Phew, this batch is quite heavy, powerful, worth reading, and I'm not sure exactly how I'm going to rank them. I just read all six over the past three days, in preparation for a book club tomorrow where my friends and I are going to talk about them. I spaced it out a bit so I could let them marinate, and I'm glad I did--a few of them left me reeling. I'll post commentary in the order that I read them.

Do Not Look Back, My Lion
I read this one first since I expected it not to gel with me very much. Alix E. Harrow's (winning) story from last year rubbed me entirely the wrong way, and while I'm happy to give her another chance, I've been limping through The Ten Thousand Doors of January quite slowly. This story pleasantly surprised me--I found the wind and cold of the setting vivid, and the playing around with gender roles was a cool bit of world-building. I felt pretty attached to the main character, too, a lonely pacifist in a society that glorifies war, and her war hero wife. Still, though, I wonder what walking away actually accomplishes (see: Omelas).

Ten Excerpts...
I don't normally do horror, but the format was intriguing and meant that in fewer words this piece touched on a lot of themes (colonialism, patriarchy, moral relativism, generational trauma), evoked some pretty brutal imagery, and told a story if you want to piece it together yourself. Disturbing in the sense that it might stick in my head a while.

A Catalog of Storms
I connected with this one the least. I found it a bit repetitive but also confusing, and I'm still not sure I figured out what's going on. In it I saw echoes of Harrow's story, with self-sacrifice and disobeying the wishes of personal authority figures. The first list of storms was interesting and imaginative, but I'm not sure this story holds up to the others.

Blood Is Another Word For Hunger
Powerful. It reminded me of Beloved (assigned reading back in high school, which we barely actually covered so my memory and interpretations of it are very shaky) because of the theme of ghosts/revenants, birth, revenge, and trauma. I also saw echos of Solomon's The Deep in the themes and in the queer relationship that gets hinted at. It might have had too much telling and exposition for my taste, though.

As the Last I May Know
More themes of war and standing up to authority. Takes Roger Fisher's nuclear war proposal a step further by having the "volunteer" be a child, and brought up interesting ethical dilemmas that arise from that. I really liked this story, and how I could understand each actor and their motivations. I looked up S.L. Huang and we overlapped for a year at MIT too! (I didn't know her but I like seeing someone break out of STEM and into the arts.)

And Now His Lordship Is Laughing
I'd consider this one horror too. More colonialism and oppression themes, and I seethed at the injustice alongside the main character. It also brought to life a period of time in India I've only briefly heard about, the Bengal Famine of 1943, and how it was perpetuated by the British occupational forces. The villains aren't very genre-savvy, so I could see where it was going, and it's a bitter and visceral story of revenge.

I think overall this category packed a punch. I met characters and lived in settings that wouldn't have gotten past a Puppies-approved SFF scene of the past. I think it's notable that while the novel category is dominated by white women, the shorter fiction categories feature a lot of marginalized racial identities and the stories' themes rightfully reflect that. I'll figure out some way to rank them in the next few days, but it's not easy.
posted by j.r at 6:34 PM on June 13, 2020 [1 favorite]

I read Do Not Look Back, My Lion first as well, which was just a function of alphabetical sorting in the voter's packet. That's the one that hit me the hardest, and I expect I'll put it first when I sit down to vote. There's a lot of great worldbuilding in it, and I really liked the theme of being a minor player among others who are the actors of history, so to speak.

Blood is Another Word for Hunger is my second pick. I loved the introduction - that first sentence was wonderfully constructed to set things up and then immediately upend them; while also hinting a little at the context of it without being explicit.

After those two, my ranking is fuzzier. In no particular order:

A Catalog of Storms I liked for the themes of personal loss weighed against duty, and how the people being "lost" didn't experience it as such. An interesting tension, but I'm not sure the worldbuilding was quite grounded enough to support it.

Ten Excerpts reminds me a bit of last year's STET, for the structural play of it. I like the idea, but I'm not sure how much is really there, in the end.

As the Last I May Know is good, but didn't really engage me as emotionally as I think the story would like to.

I literally just finished And Now His Lordship Is Laughing, and don't have much to say about it yet.
posted by vibratory manner of working at 7:00 PM on June 14, 2020

As the mother of a 1-year-old, I found Do Not Look Back really upsetting (but, I guess, in a narratively effective way?), and gave Lordship a pass because of that and the warnings on the story.

I was also kinda underwhelmed with Storms, and Ten Excerpts should have been my jam, but there was just too much space between the dots for me to connect, I guess.

Blood Is Another Word for Hunder and The Last I May Know are kind of two side of a coin for me. Last is much more of a classical White American SciFi kind of story, while Blood draws quite heavily from a very different cultural background. I think the nominations this year have a nice mix of styles and viewpoints. It will be interesting to see how the wins play out across categories on that front.
posted by DebetEsse at 9:24 PM on June 27, 2020 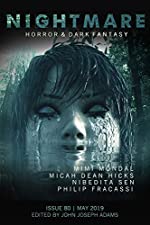