Motherland: Fort Salem posits an alternative history where magic is real and witches sided with the early American colonists after the Salem witch trials. As a result, witches have become a central force in modern society, working alongside and within conventional culture. With magic as a weapon, young women are bound by law to serve in the armed forces, creating militarised matriarchal cultures.


Led by a production team that includes Will Ferrel, Adam McKay and showrunner Eliot Laurence, Motherland: Fort Salem just finished its first season on Freeform (where currently the first three episodes are free, no sign-up required) and Hulu.

I really enjoyed the worldbuilding in this one, but most particularly the inversions the show played with: Overall I was pleased to see the degree of sexual positivism in the show, which is particularly surprising given that Freeform was formerly ABC Family, and the show is fairly clearly targeted at YA audiences.

The series has officially been greenlit for a second season.
posted by Bora Horza Gobuchul (12 comments total) 2 users marked this as a favorite
I'm currently watching it, and enjoying it greatly.

One of the things I love the most about it? How women-centric it is. All of the main characters, and most of the others, are women. That's a refreshing change from a lot of the TV that's out there.
posted by spinifex23 at 1:28 AM on May 23, 2020 [1 favorite]

It's a really weird show, in the sense that it's mediocre conventional television but like it's from a parallel universe. Not the setting of the show, which is the point, but that it's like a show from elsewhere because it's just... weird. Like, who thought the foot-sort-of-stomping-thing in place of clapping was a good idea? It never seems natural. This is like a neural net generated television show.

I like it for this reason. Seriously, despite its flaws.

According to a centuries-old academic custom, occasionally still employed, students applaud and cheer—sometimes even rising to their feet and stomping on the floor in appreciation—following the conclusion of a final course lecture by a well-loved professor.

Our Parliament (until the advent of televised sessions) signalled approval by slapping one's desk with one hand. It takes all kinds.
posted by Mogur at 9:50 AM on May 23, 2020

Love a good alternate history (and the brief scene in the history classroom with the lessons still on the chalkboard was absolute catnip to me), but good heavens, are there any adults on this show who aren't complete bastards?

I enjoyed it and will keep watching despite the worldbuilding not making a ton of sense even on its own terms.
posted by Justinian at 10:27 AM on May 23, 2020

The worldbuilding is great! The rest of this ...

I mean, it sort of feels like it was put together by a computer algorithm using all the popular YA from about 5-10 years ago. Also probably written by one too.

But I actually sort of love it. It's not quite unintentionally funny to be campy but there's such a heightened sense of it being all so ... heightened. It's all of Freeform and CW shows bundled into a blender. It's ridiculous and it's ... not good, but I love it.

I think this concept would make a really great role-playing game and I kind of wish it was.
posted by darksong at 4:25 PM on May 25, 2020 [3 favorites]

I think this concept would make a really great role-playing game and I kind of wish it was.

I love it too, and it's so obviously a YA sci fi telenovela. but I do adore how queer positive it is, and that I'm watching nearly all women (and some incredibly attractive actors in general) in its very diverse cast.

Their uniforms reminded me of if Cayce Pollard and Plastik Wrap designed a logo-free military line. (PW famously did outfits for the show Orphan Black.)

The idea of a matrilinial America is interesting, but I was pretty horrified at one revelation from the season finale. (I weirdly don't want to post a spoiler comment yet because people here aren't finished yet.)

Even just realizing that General Alder was one of the OG witches was kinda amazing, tbh. Lots of fun alternate history things to freeze-frame throughout the show; I love checking out the maps, school chalk boards and other little clues everywhere.
posted by Unicorn on the cob at 8:52 PM on May 27, 2020

The 3rd and final season is now partially available - I believe all the episodes will be available within the next several weeks.

Unicorn on the cob - which revelation from the Season 1 finale horrified you?

I am so so so fond of Tally! And of the deep immortality weirdness of General Alder and her crew of biddies!
posted by brainwane at 10:04 PM on July 29 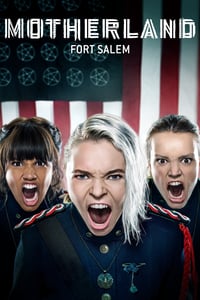