A group of psychics at an inn find themselves hunted by a group of living marionettes.


Assailed by nightmarish visions, Alex Whitaker (Paul Le Mat) and his fellow psychics descend on the Bodega Bay Inn. There, they discover that their compatriot Neil (Jimmie F. Scaggs) has apparently committed suicide. But, as the gruesome visions continue, they sense that there's still something sinister afoot. When they find themselves hunted by a band of homicidal marionettes created by twisted puppeteer Andre Toulon (William Hickey), they discover they're right.

The first film in the Puppet Master Franchise from Full Moon Productions. Currently, there are 12 movies and one recently released spin off, Blade: The Iron Cross. In addition. two years ago Cinestate released a reboot titled The Littlest Reich. Full Moon has gone on to make other killer toy movies such as Blood Dolls, Devil Dolls, Dangerous Worry Dolls, and Demonic Toys.
posted by miss-lapin (10 comments total) 1 user marked this as a favorite
Puppet Master is streaming in the US via Hoopla (with a library card), DirecTV, and the various Cinemax streaming apps.
posted by Etrigan at 10:19 AM on June 28, 2020 [1 favorite]

Could someone familiar with this franchise describe a "best of" set of these films ("best" in terms of story or development of the "canon")? I went on a Friday the Thirteenth marathon once, just so I could comment knowledgeably about the series, and those are hours I will never get back. (Part 8: Jason Takes Manhattan has its moments.) A 12 movie series is a bit daunting to consider.
posted by SPrintF at 11:50 AM on June 28, 2020 [1 favorite]

It's difficult to identify canon because there are 2 different origin stories for Toulon. There's one origin story present in PM 2 and 3 and another origin story (more detailed) in Retro PM. Also in PM 2, Toulon is a villain. In PM 3, he is a hero. So there isn't a lot of cohesion from film to film.

But if you watch the first film, it makes sense there isn't any cohesion because there's not a lot of internal logic to the script. So you can pretty much do whatever you want and as long as Blade is in there killing people, it's all ok. That's really all it takes to make a Puppet Master movie.

I would recommend watching 1,2,3 and Retro. PM 8 is just a glorified kill reel from the previous films, and I haven't watched anything after that (yet) except for the Littlest Reich, which is Cinestate and not Full Moon.

If you want to watch more than those 4 films, I'd throw in PM 6.

Note that Doll Man is not a Full Moon movie about killer toys despite the title. The titular Doll Man does, however, appear in the crossover Doll Man Versus Demonic Toys.
posted by Drastic at 3:08 PM on June 28, 2020 [1 favorite]

Is PM III the one where the puppets kill Nazis? Because I could definitely give that one another spin.

Yes the whole plot of 3 revolves around Toulon using his puppets to avenge the murder of his wife by nazis.
posted by miss-lapin at 10:37 PM on July 1, 2020

currently the entire Puppet Master Collection is streaming on arrow.
posted by miss-lapin at 9:48 AM on May 15 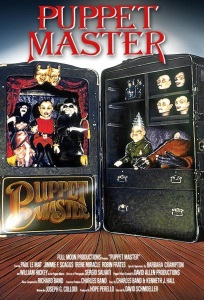