Convenience Store Woman (Japanese: コンビニ人間, Hepburn: Konbini ningen) is a 2016 novel by Japanese writer Sayaka Murata. It captures the atmosphere of the familiar convenience store that is so much part of life in Japan. The novel won the Akutagawa Prize in 2016. Aside from working as a writer, Murata worked at a convenience store three times a week, basing her novel on her experiences.

Keiko Furukura is a 36-year old woman, who has been working part-time at a convenience store, or konbini, for the last 18 years. She knows since childhood that she is "different" and that expressing her own views and actions is inexplicable and distressing to others, and causes problems.

The highly regulated world of the konbini, where each action is prescribed by the corporate manual, allows her to maintain an identity acceptable to those around her and a sense of purpose. She models her behavior, dress style and even speech patterns on those of her coworkers. Keiko maintains some friendships and a relationship with her sister, but finds it increasingly difficult to explain why, after 18 years, she is still single and working as a temp in a convenience store.

In the novel she meets Shiraha, a man who cannot hold a steady job and lives on the fringes of society since he doesn't conform to "normal" expectations. While they have no affection for each other, Shiraha eventually moves in with Keiko. They decide that by pretending to be a couple they can avoid problems with families and a society that expects them to have romantic relationships, children and stable job.

As part of the plan Keiko eventually quits her job in the konbini, though she immediately feels that her life has lost purpose. She stays home, doing nothing, and only at Shiraha's insistence applies for steady jobs.

On the way to the first job interview, Keiko and Shiraha stop at a konbini. She sees that the store is not as regulated and immediately begins rearranging the merchandise and assisting the staff. When Shiraha confronts her, she explains that her purpose in life is to be a konbini employee; even though she knows that it would be easier and more convenient for her to live the semblance of a "normal" life with him. She then walks away from an enraged Shiraha, cancels the interview and resolves to find herself a new konbini.
posted by growabrain (5 comments total) 4 users marked this as a favorite
This book was so great! Depressing, but great.
posted by Hypatia at 10:28 AM on June 29, 2020 [1 favorite]

I read this last year and really liked it. I love convenience stores, and while I haven't been to Japan, I've been to enough Family Marts and 7-Elevens in Taiwan and Hong Kong to get a sense of what Japan's konbinis are like (I think). The corporate regimentation (which I assume is present in American 7-Elevens and other chains, not only in Japan) is interesting to compare against the non-franchise/mom and pop convenience stores I usually frequent.

One of the things I liked most about this book is Keiko's refusal, or maybe inability, to be ashamed of her path in life; she's happy doing this job, even if it's rote and looked down upon, so she does it. I have a problem with people being told they're not living up to society's expectations, since many, if not most, of those expectations are bullshit. She can be read as an embodiment of alienated labor who should be upset about it but isn't, which says something about her, society, and capitalism, but I'd have to re-read the book before venturing any concrete ideas on what that something is.

Shiraha's a real piece of shit.

Thanks for posting this. I was thinking about reading this book, and now I definitely will.
posted by chimpsonfilm at 5:37 PM on June 29, 2020 [1 favorite]

Thanks for posting this. I was thinking about reading this book, and now I definitely will.

Update: I liked it a lot! The author worked part-time in a convenience store for many years, and it shows. She gets the sense, the pulse, the life of the place exactly right, without a trace of cynical detachment (or satirical boosterism). Keiko is unique and real. Perfect ending, too.
posted by chimpsonfilm at 9:09 PM on October 27, 2020 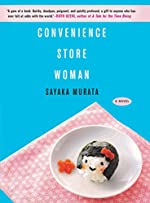