Meet Roger. Skilled with words, languages come easily to him. He instinctively understands how the world works through the power of story. Meet Dodger, his twin. Numbers are her world, her obsession, her everything. All she understands, she does so through the power of math. Roger and Dodger aren’t exactly human, though they don’t realise it. They aren’t exactly gods, either. Not entirely. Not yet. Godhood is attainable. Pray it isn’t attained.
posted by dinty_moore (5 comments total) 4 users marked this as a favorite
I'm curious to see what others think. I'm not going to finish this one, especially not before Hugo ballots are due (if they ever open up!) but gave it a half-hearted try when my hold came in. I read about 5% and wasn't feeling it. I've read a handful of Seanan McGuire works, including In An Absent Dream from the novella category this year, and it's decent but doesn't really speak to me. It seems like there are echoes of themes she uses in other stories--fairy tales/story, prophecy/destiny, magic with lots of rules, and creepy horror elements. If that's your thing, and you otherwise like her style, I can see why this one appeals. A lot of reviews have said this book is one of her best (and she has an impressively long bibliography), but I just have too much else on my TBR.
posted by j.r at 5:26 PM on July 4, 2020

I'll put it this way: she's my favorite author and this is very well done. The overall concept of it is too creepy for me to love it personally, though. I am not a Creepy Horror Person, generally speaking, which is why. I actually library read it back in the day. But I like Roger and Dodger and their relationship, and as a Californian the earthquake scene indeed gave me the heebie-jeebies. But the overall concepts of how the world worked was not something I personally would love.

I'm a big Seanan McGuire/Mira Grant fan but, for better or for worse, have always relegated her stuff into the fluffy/beach book/junk food reading bucket in my brain, and have rarely recommended her books to others unless I knew they had the exact same tastes and specific interests as me (the one exception is the Newsflesh series, but even then I have to awkwardly explain, no really, it's better than the ridiculous plot description makes it sound!).

This is somehow an entire dimension apart from the rest of her writing. Many of the same themes are there, you know it's a Seanan McGuire book if you've ever read anything she's written, but the writing and storytelling is stunningly adept on an entirely different level. I've given this book as a gift to three of my pickiest-about-literature relatives--people I'd never have given her urban fantasy or science horror books to--since it came out and they've all loved it, as have all the coworkers of varied tastes and backgrounds I've recommended it to.

It's intense, and it needs content warnings for a particularly rough suicide attempt scene. But it's also magical and beautiful and just about perfect.

This is all the more impressive given the fact that about 3/4 of the way into the book, it becomes clear that the title of the book and the names of the characters are an obscure pun based on an old horror novel most people have forgotten, and you can't help but wonder if the entire book wasn't written solely to make the pun.

(You don't need to get the pun to get the book, and even though the book deals heavily with the power of language, it's otherwise not at all punny. But it's a hell of a thing to be deeply engaged in an intense, emotional story and then hit the "ARE YOU KIDDING ME?!" moment of pun realization.)
posted by rhiannonstone at 3:35 PM on July 6, 2020 [2 favorites]

1. The story unfolds very nicely, with small hints being built on so that they land with greater impact.

2. The world building is interesting and compelling. It feels a bit like she's trying to do John Crowley for a more mass audience. That is not a snub; Crowley is great, but he's also really demanding, and that is not always what people want.

3. The audiobook is generally well read.

4. I like the way the "Wizard of Oz" segments interface with the actual story. People try this a lot, but McGuire actually pulls it off.

5. It's a pretty long book that does not actually feel all that long while you're reading it. Sort of like the Night Circus, and not at all like the Starless Sea.

6. I liked that the central relationship was love, but not romantic or familial love.

7. The "big bad" has more depth than I expected.

1. I feel like Rodger gets more attention than Dodger. I know it's partly design and their characters, but Dodger never gets to develop (or we are never shown) a life apart from Rodger, but we see his life apart from her.

2. A couple of the villains are too villainous for a book that is generally more nuanced.

3. The ending section felt just a little rushed. Like McGuire was "this could go on forever; I am not having that. 1, 2, 3... done!" It's not terrible, but the rest of the book is almost luxuriously leisurely in telling the story; would another 50 pages have been too much?

4. There is a lot made of Roger's Boston accent, and I have a little trouble imagining what accent a kid raised in Cambridge with academic parents would have. Not the stereotypical "Southie" accent. At any rate, the audio book reader cannot get Roger's accent further east than Brooklyn. This may be a small thing, but it kind of grated.

I really enjoyed it. I've liked a bunch of Mira Grant box, but I generally can't get into stories built around fairies, so it was fun seeing her do her thing in a setting that I actually enjoyed. (Full disclosure, I am mostly bored by zombies, too, but NewsFlesh kept me reading; maybe because I trust the person who recommended them.)
posted by GenjiandProust at 11:07 AM on July 10, 2020 [2 favorites]

Two of my favorite tropes are people who have godlike power, and time travel and this manages to have both.

I enjoyed it. Curious about the obscure horror novel and book title pun.
posted by gryftir at 8:13 AM on July 12, 2020 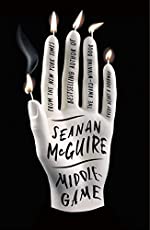