Flex Mentallo returns, and tries to use the power of Muscle Mystery to free Rita of her inhibitions.
posted by kittens for breakfast (15 comments total) 3 users marked this as a favorite
Random notes:

*I read Grant Morrison's Doom Patrol issues when Bill Clinton was president, so I'm not really sure how the Candlemaker and Dorothy are related in the original stories. But it seems clear that -- like Jane -- Dorothy has dissociated and redistributed her powers among alters who are varying degrees of Fucking Disturbing. How is Dorothy the sweetest little girl of all time? It's simple: she gave all of her rage to an incredibly terrifying savage monster whose head is on fire.

*Is Dorothy somehow older than the Chief? We know he's 139, and Dorothy says that she's "one hundred and three quarters." If Dorothy's 175, what is really going on here?

Dorothy says her age like a lot of young children would. My nephew for instance says he's 8 years and 9 months.
posted by Pendragon at 3:11 PM on July 4, 2020 [1 favorite]

Flex and Rita was cute. Rita's gold skirt is gorgeous.

Cliff being a brain-in-a-jar, offering him empathogen–entactogens to get out of a massive funk is perfect. I wonder if Chief makes his own or has a source?
posted by porpoise at 9:29 PM on July 5, 2020 [1 favorite]

Another fantastic episode. Flex Mentallo is the best. I love how super-sweet he is with Dorothy, and I LOL-ed when he demonstrated to Rita how to make your mind completely blank.

Super depressing that Rita hadn't had a (non-Flex-induced) orgasm since the Hoover administration! Loved her drawing the spot on the wall for Flex to put his nose. Of course all the hilarity resulted in uncovering more bleak back story, and it was heart-rending when she used the same dismissive line with Dorothy that her mother had used with her. Stop digging into your back stories, Doom Patrol, it never turns out well.

When the Shadowy Mr. Evans first got wind of the sexual energy and melted into shadow, at first I thought he had the same condition as Rita and sensed her sexual energy as a mating call. Sure, that doesn't explain the periscope in the head, but I don't need everything explained.

A floating demon giving birth to a demon baby that Jane shoves right back inside is the bat-shit bizarreness that makes this show special to me. That last lingering sex ghost inching across the floor was hilarious too.

At this point I am 100% done with the Chief. I don't care how many times I see him rueing his actions, keeping an 11-year-old confined to her room alone except for the occasional visit for 90+ years is unforgivable. That's pretty much the worst parenting I can think of, and definitely won't backfire spectacularly.
posted by ejs at 5:38 PM on July 6, 2020 [4 favorites]

As a long-time fan on the comics, I really never thought they’d give us the Sex Men! And the saxophone theme music for them just made it perfect.
posted by bile and syntax at 8:20 PM on July 7, 2020 [1 favorite]

This show is a goddamn joy. A JOY.

When the semi-imaginary giant tarantula who tells knock-knock jokes Herschel jumped out to surprise Dorothy into dropping Danny, I was really not sure it was 100% totally an accident, and I'm still not sure now.

I wondered last season about why Larry and Rita specifically seemed to be actual friends and these last couple of episodes have been quite sweet. I legit cannot tell if Larry says stuff like "yeah nbd, I would kill everyone with radiation" to intentionally self-sabotage or because he hasn't tried flirting in fifty years and was maybe never good at it, but I'm glad Rita knows when it's time to go off and get one of Flex's pec cupcakes. I both understand why Rita had Flex put his nose on the dot and deeply appreciate that it was not because he was being a creep and he clearly would have been just as affably helpful if she'd asked him to help her move a dresser.

It's been a long long time and I don't remember the Sex Patrol having such a Ghostbusters vibe but god, what a flex (no pun intended) to just casually slide that in two thirds of the way through the episode. ("It was Cuddle or Handstuff" oh my god)

So is that the end of the plot of Jane being voted out of her job? Because that was a pretty interesting direction, and I didn't totally understand what happened between Hammerhead and Cliff at the end that the Underground decided Jane "won" for now. Won how, that the world was complicated and none of the others want to be in it all the time? I mean yes that's true, but the others all seemed to come out and do their jobs and have a nice enough time at it without Jane, what are they feeling like she brings that they can't do without? I guess just that staying with the Doom Patrol can also help protect Kay and save the world and other good things, but Jane has to be the one to deal with them?

Way back in Titans where the DP were introduced, it was through Gar bringing Raven back to the house, and even as side characters I thought it came across how much they loved having kids around. (well, it was a different take on Niles with a different actor, but overall.) That had different connotations last season, when you found out about the baby Rita feels responsible for, and that Larry and Cliff never got to see their own kids as teenage dumbasses, and I dunno, it's way more lowkey than alllll the understandably fraught parent-child relationships on this show, but a nice thing to keep around nonetheless. (And actually I don't even know if it's still canon that they previously all raised a kid (who's sometimes a tiger) together? This is way off on a tangent, but a lot of the dynamics on this show only really make sense to me if you assume nobody in that house had an actual conversation with each other for like forty years.)

Catatonic over a stove after the afterafter party, staring at the thing you're trying to make be grilled cheese, is absolutely an emotion.

I could not possibly choose a favorite line from this episode, I kept having to pause it from laughing too hard. But I really love Rita, and I really felt for her here, and these past episodes you saw again how she's worked hard to become a genuinely kind person who Dorothy trusts, and her sleepy offhanded "you have other talents" GUTTED me.
posted by jameaterblues at 12:07 AM on July 9, 2020 [2 favorites]

And actually I don't even know if it's still canon that they previously all raised a kid (who's sometimes a tiger) together?

I haven’t watched Titans or any of the Arrowverse TV shows but I read that the “Crisis on Infinite Earths” crossover event established that the Doom Patrol from Titans are in a different timeline than the Doom Patrol show.

Remember when inconsistencies could be papered over with a “don’t worry about it” rather than having to introduce multiverse theory?
posted by ejs at 9:05 PM on July 9, 2020

Yeah, that’s my take too, though I didn’t think it seemed like it even lasted into season one; that Titans episode was still kicking the tires and some stuff just got discarded.

Also, you may enjoy knowing that at the end of the Crisis crossover, when they had this montage of moody action shots showing all the different heroes on different new Earths looking serious and badass, Doom Patrol’s was them having a dance party alone on their front lawn in broad daylight. And like, yeah, fair, this...this maybe needs a universe to itself.
posted by jameaterblues at 11:02 PM on July 9, 2020 [3 favorites]

"Every person in this room has a past that someone persecuted them for."

Can I just say how much I loved that Jane's personality "The Painter" has a Frida Kahlo unibrow?
posted by seasparrow at 8:14 AM on September 10, 2020 [2 favorites] 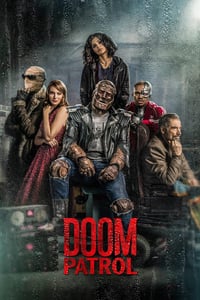