Memory Alpha has the cure for your informational deficiencies:

Numerous animation issues with this episode, including McCoy being both on the bridge and in sickbay twice (when Kirk first calls down after Spock's collapse, and when McCoy calls the bridge to remind Spock about his shot) and a scene jumping from sickbay to the bridge.

The new pronunciation of Orion (ORE-ee-un) in this episode is markedly different from numerous other appearances in the show, both prior and post, which used the standard "oh-RYE-un". However, there is precedent for that pronunciation - Lake Orion, MI, is pronounced that way.

Filmation founder Norm Prescott, a voice very familiar to cartoon watchers in the '70s and '80s, shows up here as the Orion first officer.

McCoy's sentimentality (when Spock can't hear him, of course) seeps out again:

Kirk: It'll hurt seeing him like that.
McCoy: As much as it may seem at times that I can't stand that pointy-eared encyclopedia, I don't want to see that happen to him.

Agreed. Most of the stories around the Orions deal either with the Orion women, and mostly in an egregiously fanservicey way (we'll see what LOW does with D'Vana Tendi--and can you believe that it's already dropping tomorrow?), or with the Orion Syndicate as this shadowy space Mafia. Here, they are going with the idea that the suicide not only of an individual but of an entire ship's crew isn't reserved only for high-stakes missions such as trying to juke the Coridan question (as in "Journey to Babel"), but standard practice for their acts of piracy. Good use of their negotiations, the crew of the freighter struggling with their situation, and Spock trying to soldier on.
posted by Halloween Jack at 1:43 PM on August 5, 2020 [2 favorites]

This is 2020 brain maybe, but you'd think if they had a disease on board that was fatal to Vulcans they might have quarantined it more strictly? Ah well...

Perhaps they went with ORE-EON because they'd also committed themselves to a character named O'Shea in this episode?

The whole 'bad guys doing a thing that officially they're not supposed to but that they do all the time' business is really similar to the TAS Kzinti.

Is it my imagination, or are they basing the appearance of characters played by Majel Barret on her appearance as well? This character bears a certain resemblance.

...along with the Kzinti, the Orions were one of the major player factions in StarFleet Battles, as someone mentioned in a previous thread. The animated series has a certain gravity in the pre-TNG lore.
posted by StarkRoads at 9:36 PM on August 5, 2020 [1 favorite]

Pretty solid work for a high-schooler, I'd agree. And is it me, or has it been rare (maybe even unprecedented) in TAS for an episode to end with the classic Kirk-Spock-McCoy "Eh heh heh heh" moment?

Shatner had one of his more serious Acting Moments here, IIRC in his first transmission to the Orions: you can hear Kirk fighting to keep the emotions under control in front of the bridge crew. Great moment, worthy of some manner of TAS highlight reel.

I can suspend a lot of disbelief/distaste with this show, but the Orions' headgear is just too freakin' ridiculous, and that took me right out of it.
posted by CheesesOfBrazil at 6:23 AM on August 7, 2020

Does anyone else hear a lot of slurring in McCoy's early dialogue in this episode?
posted by hanov3r at 7:07 AM on August 7, 2020 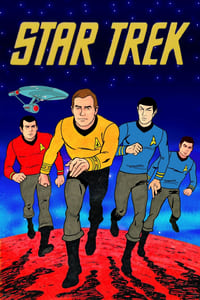