Dubbed "The Cannibal Cop," Gilberto Valle was convicted in March 2013 of conspiring to kidnap and eat young women as well as using a police database in order to learn about his intended victims. Valle argued it was all a fantasy; the prosecution's narrative convinced jurors otherwise.

Valle was facing a possible life sentence when filmmaker Erin Lee Carr began visiting him in prison. After 22 months behind bars, his conviction was overturned in a stunning reversal. Carr was there for his release and subsequent house arrest to examine a life arrested.

The documentary explores questions like "legallywhen does thought become an act?" and "where is the boundary between fantasy and reality?"
posted by miss-lapin (1 comment total)
Currently boasting a 89% ranking on Rotten Tomatoes, critics generally applauded Carr's ability to remain objective while presenting various facets of the case.

Certainly a particularly complicated watch at the moment.
posted by miss-lapin at 7:03 PM on August 30, 2020 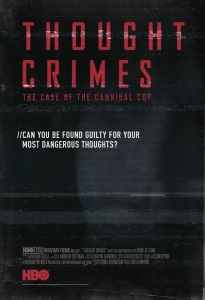