CRFC8: Charlie Kaufman's Synecdoche, New York centers on a theater director named Caden Cotard. Caden, coming off an award winning production of Death of a Salesman, is given a MacArthur grant for his work. With the newfound money he strives to make the most realistic piece of theater ever.


Welcome to the eighth Constructed Reality Film Club (previous threads here). Next week we'll be discussing... nothing! The club will be taking a break for the holidays, which are a constructed reality unto themselves.

Resources:
Synecdoche isn't available for streaming, however you can search for local libraries that hold the film at worldcat.

David Chen (of SlashFilm) and Amy Nicholson (of the LA Weekly) narrate a video essay providing an interpretation of the film: part one and part two.
posted by codacorolla (10 comments total) 4 users marked this as a favorite
This is my kind of mind bending deeply mystifying (or just confusing (which can be ok too)) wacky what the hell does this all mean flic, but, sigh but just but, Kaufman managed to turn all the wicked twists into meh twonks. I probably needed to see it in an different environment or mind state but it just did not hit that oh my goodness huh, note.
posted by sammyo at 6:06 PM on December 15, 2014

Now if they had all got together and produced a big off-off-broadway walk around show for a few months and Hoffman (RIP) do talk show with enough wackiness where folks started to wonder if he was off the deep end, and never let on.
posted by sammyo at 6:12 PM on December 15, 2014

I haven't seen this since it originally came out, so I'll try to watch it again and come back and talk about it.

I do remember it really left me in a really strange place, torn between appreciation of the movie and a keen existential indigestion that took a few days to really work through. I saw the movie with a friend and I remember her thinking that something was wrong, because we walked out of the theater and I sort of numbly said "Okay, good night" and took off across the parking lot. I wasn't angry or sick or anything, I just was having trouble processing and wasn't prepared to talk about the movie (or much of anything else) right at that moment.

But man, yeah, there's so much going on here. Just off the top of my head -- watch the opening breakfast scene and try to guess how much time is actually passing. (Pay attention to the newspaper, the clock, the radio.) Then consider what that scene means in the context of the rest of the movie. (I haven't looked at the linked reviews or analysis, figured I'd watch it again first, so apologies if I'm reiterating the obvious.)

So many thoughtful touches and references throughout, symbolism everywhere (some of which is subtle and some of which is not at all). Hazel's house, for example, is pure Tennessee Williams, but I found myself really affected by both the absurdity and the tragedy of Kaufman's vision of it, and the image kept coming back later that night as I tried to get to sleep in my own burning house.

I don't know. Probably most of you have a better grasp on who and what and where you are in your various lives, and so you won't come away from the movie quite as unstuck as I did. I guess sometimes a movie hits you at just the right (or wrong) time in your life and suddenly everything (or nothing) makes sense. There were scenes where this was practically a horror film to me, as I recognized so many of the same bad decisions and insecurities and delusions and delays and missed opportunities that haunt my own life and felt that same dizzy emptiness yawning open beneath me that keeps me up far too late some nights, staring wide-eyed at the wall as I realize that no, ultimately everything is probably not going to be all right, not in the story of my life at least.

But then that's the reality of life, right? And we all either find a way to make peace with that or spend the rest of our lives looking. I'm still looking, and frankly Mr. Kaufman, you didn't do much to help with that, last time around. I'm in a little different spot now than I was when I first saw the movie, so I'll watch it again and see what I take away from it this time around. Looking forward to seeing what other folks have to say about it.
posted by Two unicycles and some duct tape at 9:11 PM on December 15, 2014 [5 favorites]

I really liked this film, only having seen it once. I watched it in a sort of zen, trippy state, not really trying to interpret what it was saying but just experiencing it. It moves from different moods, and in a way becomes several different films and stories along the way. There's a lot to puzzle over within it, but I actually prefer it unsolved, as a mood piece.
posted by Cannon Fodder at 11:38 PM on December 15, 2014 [2 favorites]

It's a very long, loving look at the experience of being clinically depressed and self-loathing, both as a defense and weapon against the world.
posted by The Whelk at 11:10 AM on December 16, 2014 [4 favorites]

Which is exactly why I hated it. Yep. I'm THAT sour grape in a film thread.

The relentless air of decaying body, decaying relationships, jerky characters, and situations that didn't go anywhere made this one of the most unenjoyable films for me since We Need to Talk about Kevin (which is awarded 7.5 from IMDb - large rock of salt, there). I think I've blocked most of it out (I saw it about 4 years ago? Maybe 5).

It's cool that other people are so into this - I know there were rave reviews, but not my cuppa. In fact, I think the reviews just set me up for a harder fall.

Nice pick for a FanFare post, though, codacorolla - you did a great job on it.
posted by joseph conrad is fully awesome at 5:21 PM on December 16, 2014

I loved it but have never gotten around to watching it again.
posted by Ivan Fyodorovich at 6:17 PM on December 16, 2014 [3 favorites]

well... I was gonna say this is probably one of my favorite movies and that it's a poem about the passage of time, generation, destruction, creation, performance, and the beauty and tragedy of life...

I think it's one of the few successful philosophical movies - unlike "Waking life" or "Tree of Life" it's subtle and has memorable characters, but still, ultimately, it's the ideas and images that are most important. I think other philosophical movies that really work on that level focus on nature (Solaris, Stalker, maybe Melancholia or Moon...)

Anyway, I wouldn't describe it as about depression, but maybe that just says something about philosophy (or me).
posted by mdn at 8:15 PM on December 16, 2014 [3 favorites]

I saw this movie when it was new and haven't seen it since, and have no desire to. It has stuck with me and I think about it often, especially that ending, the cold and calm counting down to annihilation, as if nothing in a person's life ever actually mattered. This movie really gets to my deep-rooted fear of death and the transience of things and the fact that you quickly become irrelevant to the world even before you've left it.

As the people who adore you stop adoring you; as they die; as they move on; as you shed them; as you shed your beauty; your youth; as the world forgets you; as you recognize your transience; as you begin to lose your characteristics one by one; as you learn there is no-one watching you, and there never was, you think only about driving - not coming from any place; not arriving any place. Just driving, counting off time. Now you are here, at 7:43. Now you are here, at 7:44. Now you are gone.

What I like to say about this movie is that it's like having a long conversation with a friend who is both a brilliant poet and is pretty depressed, so you leave feeling both inspired and drained.

It feels pretty self-indulgent to me as well--I think it's significant that this is the first film that Kaufman has written and directed. Seems to me that Kaufman's unique genius--which I love more than almost any other screenwriter--works best when it's tempered by the influence of someone else.
posted by overglow at 10:17 PM on December 17, 2014 [1 favorite] 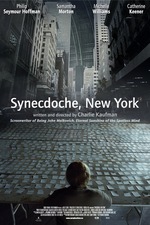