After a collision with a shipping container at sea, a resourceful sailor finds himself, despite all efforts to the contrary, staring his mortality in the face.


One man against the Sea. And that one man is Robert Redford. There is no backstory. Redford's character only utters a few words throughout the course of the movie. He is listed in the credits as "Our Man." There are no other parts.

The movie was critically acclaimed when it came out. A portion of a review quoted in Wikipedia:

David Morgan of CBS News gave the film a positive review, stating, "Four decades ago Redford demonstrated a similar capacity for survival skills as the mountain man Jeremiah Johnson. Today, at age 77, without a supporting cast and performing virtually all of his water stunts himself, Redford proves he is still up to the task, shining in what is an extremely physical but also an intellectually demanding role."

Poster's thoughts:
It held my attention all the way though. There were a few parts where I was ready to move on (waves crashing over the deck are only so entertaining), but overall I was hooked. Redford has not lost it after all these years of directing and running Sundance. I read an article awhile ago about how he had gotten sidetracked over the years shepherding independent cinema forward and directing along the way and while he wouldn't have given all that up to keep acting, he was ready to do some things before he got too old and retired. It definitely shows in this movie.

And the most important thing... There were a few shots toward the end of the movie where the camera caught Redford in profile. It was like he had dropped decades and we were catching glimpses of the Redford of the late 60s and early 70s.
posted by Fukiyama (6 comments total) 5 users marked this as a favorite
I really, really liked this movie. I read later critiques from sailors pointing out all the things that the main character did wrong--sometimes REALLY wrong--, and that's notable, but doesn't detract from it much for me. It might for a knowledgeable person who might start blaming him for mounting misfortunes, but it scratched the itch that I thought The Grey would do, but didn't.

I'm still struck by a comment I heard from one audience member to another as I left the theater: "I mean, it was well-acted, of course, but I just don't know why I should care about his character." And I was just floored and terrified by the fact that, in the absence of a narrative backstory, they weren't immediately sympathetic to the sole human on screen in peril.
posted by pykrete jungle at 12:34 PM on October 16, 2020 [5 favorites]

And I was just floored and terrified by the fact that, in the absence of a narrative backstory, they weren't immediately sympathetic to the sole human on screen in peril.

I think the last few years has shown us that empathy for human suffering is the mark of a snowflake. Contempt for people plays better in the comments section.
posted by ricochet biscuit at 12:43 PM on October 16, 2020 [2 favorites]

I was just enthralled by this from beginning to end and will most likely watch it again sometime. The setting helped, plunked down in the center of our 5.1 surround system, fully immersed in the creaks and sloshes of a failing boat and thunder of an unforgiving ocean. Redford was perfect in his depiction of an imperfect sailor, and the lack of character background (a lingering shot of a framed photo of his family back at home would have killed the mood for me) only served to focus attention to the fraught here and now. I didn't expect much going into it and was delighted to discover this gem.
posted by vverse23 at 11:06 PM on October 16, 2020 [2 favorites]

I've been wanting to watch this for awhile, and this posting prompted me to check it out. I was mostly enthralled, but having some experience sailing, I did have some issues of his lack of safety equipment (especially an EPIRB or PLB and a water desalinator) which exist only to make the movie more harrowing.
Reading the Wikipedia article about the film led to these comments in : "Sailor's Review of Movie All Is Lost"

• In the beginning he wakes to find his cabin mostly flooded after striking the floating container. What, no automatic bilge pump or even a $10 bilge alarm? And later, he doesn't even have a handle for his cockpit bilge pump?
• The evidence is that he had electronic navigation (a GPS chartplotter, presumably) before losing electrical power. But what, no cheap handheld backup GPS? Even a smartphone could tell him his location! And when he discovers that his boat batteries still have some juice, he at least could have tried to wire his (waterproof) chartplotter directly to the battery.
• What sailor with even a few bucks carries a handheld VHF that is not submersible?
• What sailor crosses the ocean without an EPIRB or PLB for emergency help?
• Why does he have so very few flares? (Just enough to make a futile attempt for help - but not enough for easier rescue from the final boat.)
• Why does he stop the hull damage repair after only barely achieving a very flimsy temporary fix?
• Why does he not have an abandon-ship bag (with more food and water and other survival supplies) at the ready like all serious ocean sailors?
• Why is no lifejacket ever used? Why not at least take the prominently displayed life ring from the rail into the life raft?
•Why does he cease any fishing attempts after one small episode with a shark?
posted by ShooBoo at 8:04 PM on October 17, 2020

It is quite a feat for the filmmaker to dryly state at the outset that 'this ends in death'. Then, lead the audience through the process *with one guy* in a way that still leaves the audience with hope, disappointment, and sadness.

We are all on a conveyor belt to the boneyard, to paraphrase Russel Brand.
posted by j_curiouser at 7:44 AM on October 24, 2020 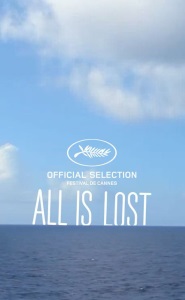