The eccentric members of a dysfunctional family reluctantly gather under the same roof for various reasons.


Ostensibly based on a nonexistent novel, and told with a narrative influenced by the writing of J.D. Salinger, it follows the lives of three gifted siblings who experience great success in youth, and even greater disappointment and failure in adulthood. The children's eccentric father Royal Tenenbaum leaves them in their adolescent years, then returns to them after they have grown, falsely claiming he has a terminal illness. He works on reconciling with his children and ex-wife.

Nathan Rabin: P.T. Anderson followed his magnificent 1997 breakthrough Boogie Nights with 1999's Magnolia, a star-studded, messy, overreaching, ultimately compelling ensemble drama in the vein of ambitious masterpieces like Hannah And Her Sisters and Short Cuts. Two years later, Wes Anderson returns with his own star-studded, messy, overreaching, ultimately compelling ensemble comedy-drama, The Royal Tenenbaums, a film that resembles Magnolia nearly as much as it does Rushmore. Just as Magnolia seemed designed for people who loved Boogie Nights but somehow felt that it wasn't long or ambitious enough, Tenenbaums is the work of an artist who appreciates his own stylistic voice even more than his most ardent fans could.

Marjorie Baumgarten: His compositions are all picture-perfect, and the music score shrewdly complements the action. The details make it all memorable, as do the performances. This is among the best ensemble work of the year, and some of the best work of Hackman and Huston's careers. At times, the film becomes dangerously precious, as if Anderson also fears the malaise that besets the Tenenbaum clan and throws in absolutely everything he's got at his artistic disposal in order to keep the doldrums at bay. In the end, though, he has created a big generational saga that woos the audience with its humor, spirit, style, and ability. Genius here is an evolutionary thing.

Lisa Schwarzbaum: The picture’s creative pulse, though, is clearly, brightly, powerfully that of Anderson, a filmmaker whose storytelling style is so fresh, so happily idiosyncratic, and so all-encompassing that it stirs up strong response from people who either love or don’t love his stuff. But Anderson never demands love or attention, never demeans, never makes fun of his dollhouse family even when being funny about their extremis. Here’s a movie guy (the Texas-bred Anderson is too homegrown, I think, to be encumbered with a barfight-starting French designation like auteur) whose cinematic vision gives off a personal, identifiable glow.

Trailer
posted by Carillon (16 comments total) 3 users marked this as a favorite
Masterpiece.

A week doesn’t go by without my wife or I quoting something from Tenenbaums.
posted by Special Agent Dale Cooper at 7:49 PM on October 18, 2020 [1 favorite]

I think this has aged better than a lot of Wes Anderson's other work, which I still enjoy and like, but maybe am not as interested in rewatching. I saw this for maybe the third time a year or two ago and it had a similar impact on me as the first time. Fantastic soundtrack, visually arresting, intricate scene designs, somewhat aimless pacing. "Dangerously precious" is pretty accurate description, I can understand people who think it went over the edge into twee narcissism, but a little charity goes a long way.

I've seen this movie so many times and it's in that collection of movies where you always notice something new. Well done.

My Isolation Playhouse group (where we do script readings over Zoom to cope with Covid....been at it since about the 2nd week of lockdown) did this, and I played Royal. I think because so much of Wes Anderson's storytelling is visual it didn't translate well to the medium. Also, funny movies work so much better for Zoom, and while this has some dark humor in it, it's not a funny movie.
posted by spikeleemajortomdickandharryconnickjrmints at 8:08 AM on October 19, 2020 [6 favorites]

My husband and I just saw this two days ago, for the first time. It's the only Wes Anderson movie I have ever liked--apparently, I'm not his audience. I really liked the fact that Royal started to turn it all around before he died, which is not quite enough to make up for all the racist crap he said to Henry, that dear man.

Every once in a while I would get thrown by how much Eli and Richie looked alike because they're not supposed to be related, although they obviously are brothers IRL. Richie was my favorite of the Tenenbaum children.
posted by ceejaytee at 9:53 AM on October 19, 2020

This movie gives me all the feels. Plus much of it was shot uptown (Trinity Cemetery and Convent Avenue) and it gave me a sense of home that many other NYC movies never had.
posted by computech_apolloniajames at 10:21 AM on October 19, 2020

I would strenuously disagree that it's "not a funny movie". The script is very straight-faced, but I think it's very good at mocking its characters simply by presenting the contrast between its characters immensely polished and accomplished public personas and their deeply messy personal lives. And the performances, design, and editing just heighten that contradiction at every turn. Even the attempted suicide sequence presents some truly sublime bits of absurdity. (The juxtaposition between Bill Murray's impossibly stiff posture and affectless face, and his blood-stained smock as he runs behind the gurney is etched in my mind).

I think that sense of humor is why I love this movie, even though I can't stand Salinger, who's such an obvious influence on this story. (In fairness to Salinger, it's possible the problem lies less with the books and stories he actually wrote, and more with the way they were presented to me in my early teen years as Very Serious Literature to analyze minutely and extract Meaning from.)
posted by firechicago at 10:54 AM on October 19, 2020 [2 favorites]

I recently rewatched this (it's available on Amazon Prime) and I was struck by both how influential it was at the time (the soundtrack alone had a huge impact) and how well it holds up. As skewed says, it has aged better than most of Anderson's movies, and I think that has to do with how strong the entire ensemble is, both character/writing-wise and in terms of acting. Every single person in the family has a really powerful emotional arc. And all the Anderson twee artiness is in service of those emotions, not the other way around. For instance, it makes sense for the entire film to feel like a diorama or a dollhouse because that enforces how stuck these characters are all in living out these roles they established for themselves 20+ years ago, and how invested they are in the romance of their family stories, and how stale yet still beautiful those stories have become.

Another thing that struck me this time is how sweet the relationship between Richie and Eli is. I guess it's because they're brothers in real life, but that first scene when they reunite and they're just touching each other in this way that feels very real but you never see between straight men in movies - I loved that.

This movie made me a huge Wes Anderson fan but I have to say I've been pretty underwhelmed with his work since. It's always beautiful to look at but often lacks the emotional depth and dark humor of this film.

Also, that scene where Margot comes off the bus, with "These Days" playing, and she and Richie stare at each other with such pain and love and longing ... that's gotta be one of the best scenes in movie history.
posted by lunasol at 11:17 AM on October 19, 2020 [5 favorites]

A week doesn’t go by without my wife or I quoting something from Tenenbaums.

Every time for the last decade in this house there is any reference to the hour:

This movie made me a huge Wes Anderson fan but I have to say I've been pretty underwhelmed with his work since. It's always beautiful to look at but often lacks the emotional depth and dark humor of this film.


Lunasol has it exactly. I saw Bottle Rocket in first release when it was an oddity from an unknown director and saw Rushmore a couple years later because it was the Bottle Rocket guy.

The Royal Tenenbaums exceeded my already high expectations. I recall coming out of it just giddy. Anderson has done five live-action features since then; there are a couple of moments where Moonrise Kingdom and The Grand Budapest Hotel approach this, but nothing else can sustain the strength that TRT does. If nothing else, it is the birthplace of the sadness that clings to latter-day Bill Murray like a monkey to a racehorse.
posted by ricochet biscuit at 3:37 PM on October 19, 2020 [3 favorites]

One my favorite bits of meta cruft from this movie has to be the quote from Jackson Browne about the use of the song These Days:

" Jackson Browne, who wrote and played guitar on the song "These Days" used in the film, forgot he had given permission for the song to be used until he saw the film. He described this in an interview, "I forgot that I'd licensed them to use this song. And this is one of those things that comes to you in the mail and you don't know what they're talking about and you simply give them their permission. You're sitting in the movie theater and there's this great moment when Gwyneth Paltrow is coming out of a bus or something like that. I'm thinking to myself, I used to play the guitar just like that. And then the voice comes on and it's Nico singing "These Days", which I played on." "
posted by Carillon at 10:52 AM on October 20, 2020 [9 favorites]

There's an intense melancholy imbued throughout this film, one that I can breathe in and feel in every fiber of my being inside-out, like a lungful of nitrous. There's so much of this film that's about the Past-you, Present-you and Future-you coming to terms with eachother and the expectations, hopes, failures, and disappointments of each version of you, both internal and external.
I love it.
posted by ApathyGirl at 2:37 PM on October 20, 2020 [6 favorites]

Ecstatic that I scrolled through FanFare today; these comments are giving me the my people feeling the Internet was made for.

Yes; I consider this to be Anderson at his best. I finally saw Isle of Dogs recently--chosen by someone else on a hungover morning during which I lacked the wherewithal to protest Late Anderson--and through it all I thought so much about how his later work barely clicks for me (I too, like ricochet biscuit, think his most compelling moments in the last half of his career come in Moonrise Kingdom and Grand Budapest, but neither, as a whole, congeals).

This is such beautiful, singular filmmaking. I am stunned at the performances he coaxed out of each of the ensemble actors, the set design is playful and meaningful, the camera is such an elegant conductor's wand. Someone posted a trailer to the next Anderson film on MF a bit back and I couldn't even get through a few seconds of it. He just seems to keep spiraling further into self-simulacrum scattered with quirky celebrity--the heart, the inquiry, the incision, the sincerity of Rushmore and TRT seem gone. Still, you can't fault someone for having only one masterpiece. Been a few since I watched it and will likely be at least another couple until it pops back up in the rotation, but I am happy that this resplendent thing is in the celluloid world.
posted by youarenothere at 2:15 AM on October 24, 2020 [1 favorite] 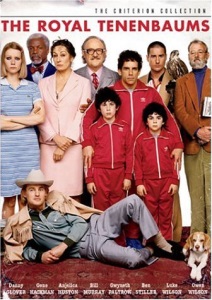