A comedian tries to make it as a serious actor when his reality-TV star fiancée talks him into broadcasting their wedding on her TV show.
posted by mathowie (6 comments total) 2 users marked this as a favorite
I wanted to like this more than I did. I love Chris Rock, I love comedy, I love Chris Rock's standup, I love hip-hop and reminiscing about old school rappers. I'd heard glowing positive reviews of this, so I went in expecting greatness and came away just mildly enjoying things.

Chris Rock does a pretty good job at developing a relationship and opening up to a reporter over the course of a day. I thought he did a better job acting in 2 Days in New York a couple years ago. Rosario Dawson was amazing and really held the entire film together, since everyone else besides Chris and her are mostly one-dimensional characters (especially everyone involved with the reality TV bits). The premise of the film is pretty standard and it was funny in parts, but overall I was just feeling so-so afterwards about it.

The preview trailer for this movie looked hilarious, with Chris Rock shown basically doing stand-up bits on screen and they edited the very best parts of the few great jokes in the film to stack into the trailer. There were loads of comedy opportunites in this film, but overall the straight up joke bits were just so-so. Rock wrote and directed the film, and if he's going to walk down the street riffing jokes, I was really hoping it would be killer material but mostly it was just ok. The scene in the comedy club was mostly half of jokes people were telling and even Rock's material was wandering and all over and none of it was really killing. He had years to write the script, I was surprised most of the jokey bits were middling material from a stand-up set. Maybe something doesn't relate when going from a live audience to a film.

I felt like overall, Chris was trying to make a film that had the same emotional impact as say, an incredible WTF with Marc Maron episode (like with Louie CK) where Marc goes somewhere deeply personal with a guest. Rock took nearly two hours to explain alcoholism and how people in the industry use it as a crutch and while that was a great arc it didn't seem to resonate with me as much as say, Robin Williams on WTF talking about his addiction for two hours.

There was also the off-putting nature of some of the material. Chris Rock makes a couple jokes about a handicapped president and how you can't "roll for office" that felt cheap. A major plot device was two prostitutes crying fake rape claims to get Chris Rock's character jailed which seemed like super gross subject matter to put down both women and sex workers in a comedy. The whole bit about the boyfriend Brad as a straight guy that does "butt stuff" for the first time only to find that quickly it "turns him gay" was so lame and hackneyed I kept thinking "what would Dan Savage say about this nonsense?" while I was in the theater. Jerry Seinfeld's bits were funny but he's a terrible actor and you could tell he was reading lines fed to him that he barely understood.

I watch everything Chris Rock does, every stand-up special, his TV shows (Everybody Hates Chris, W. Kamu Bell's show he produced), and his films, so I had very high hopes for this outing and it was pretty good, but fell short of greatness.

Also, I guess I'll put my top five here, and mostly I'm going for people that changed the rap game in my list. (My sixth would be Jay-Z for displaying modern skills to the current rap generation)
posted by mathowie at 11:06 AM on December 16, 2014 [6 favorites]

Pretty spot on. I'll basically see anything Chris Rock is in, and will definitely see anything Rosario Dawson is in, and I thought the movie had its moments, but I was ultimately underwhelmed. And Chris on gender/sex/relationships comes off pretty dated and out-of-touch.

The scenes with his ex, family, and friends were strong and I wish there was more of that. Watching Tracy Morgan made me super sad though.

Am I the only one who really liked and felt for Gabrielle Union's character? Her phone call with Dre was heartbreaking.

My top five:
1. Kool G Rap -- everyone leaves him out but he was SO dope and for a pretty long time, better than Rakim in his prime
2. Common Sense -- not big on his more recent stuff, but circa '94, the greatest lyricist of all time
3. Andre Benjamin -- just really talented and underrated
4. Pharoahe Monch -- still going strong, influenced more rappers than one would think
5. Aceyalone -- Book of Human Language is the best sustained performance of any rapper ever
Honorable mention: Rakim, Nas, Biggie, Scarface, Ice Cube
posted by AceRock at 8:01 PM on December 21, 2014

Problems with this thing: MPDG, Bechdel test, Rock on the subtleties of gender and relationships, seemingly-focus-grouped Top Five lists.

My list, and know that I'm the kind of cat whose list will be different tomorrow, or in five minutes: Big, Nas, L-Boogie, Ghostface, Gift of Gab. Sixth man: KRS. And I'm sorry, Matt, but Sugar Hill? You're looking a little like Jerry Seinfeld.
posted by box at 4:58 PM on December 28, 2014

Huh. I just saw this and liked it more than I was expecting to. The family scene in the apartment hooked me and I bought the development of the relationship between Rock's and Dawson's characters. (I didn't think I was going to, but Rock's acting was strongest when he was playing a guy in love.)

Yep, the sequence with the two prostitutes was painful, and I didn't even get why Dawson's character would be dating that wimpy white dude whether or not he was straight (but women sell themselves short in relationships all the time, so there you go). DMX singing? That worked really well for me in terms of comedy and it being a come-to-Jesus moment in the plot. And I didn't see the pseudonym thing coming even though Rock certainly had established it as a possibility.

Most of all I liked the fact that it meandered a bit, like a good seventies drama. Also, Ben Vereen (all too briefly, though).
posted by Sheydem-tants at 6:11 PM on December 28, 2014

I was disappointed that the credits didn't include ten minutes of clips of Cedric and Smoove and Wee Bey listing their legit top-five rappers.
posted by box at 5:59 AM on February 1, 2015 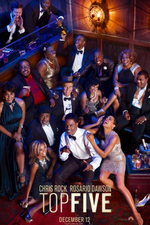