Mangrove is the first episode in this anthology series of 5 episodes created and directed by artist-turned-filmmaker Steve McQueen, each standalone, set in England, about Black British people. Mangrove is based on the true story of Frank Crichlow (Shaun Parkes), who opened Carribean restaurant Mangrove in Notting Hill in 1968.


The restaurant is a target of police raids and harassment, leading to demonstrations and arrests which culminated in a court trial.
posted by larrybob (5 comments total) 5 users marked this as a favorite
This was astonishingly good and Shaun Parkes is an absolute talent.
posted by adrianhon at 1:01 PM on November 24, 2020 [5 favorites]

I started watching it thinking it was going to be about 30 minutes and then I could go to bed. I got so sucked in that I didn't mind staying up past my bedtime. (This is high praise, from me.)
posted by The corpse in the library at 3:26 PM on November 24, 2020

My wife and I watched this over the weekend. Because it's a series of 5 episodes I figured it would be short and it wasn't until we were an our and a half in that I thought to check how long the movie actually was. Very good film though and we were engrossed the whole time . I'm guessing going on streaming probably gives it a bigger potential audience but I feel like the film was cheated of the chance to be shown in theatres. Or really all 5 being shown over the space of weeks.
posted by any portmanteau in a storm at 1:40 PM on December 29, 2020

I'm shocked there isn't more discussion on here. One of the strongest pieces of film I've seen in years. Looking forward to the rest of the series.
posted by Ahmad Khani at 6:06 PM on April 27, 2021 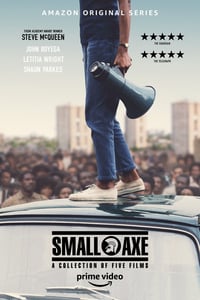