Some time after her return to Kansas, Dorothy Gale still talks of her adventure in the Land of Oz, troubling her Aunt Em and Uncle Henry, who believe her to be delusional. Aunt Em takes her to Dr. J.B. Worley for electrotherapy, leaving her under the care of Nurse Wilson. Dorothy is freed from her restraints by a mysterious girl who tells her that Dr. Worley's machines damage the patients. They escape, with Nurse Wilson in pursuit, and fall into a river. Dorothy clambers aboard a chicken coop, and in the morning she awakes to find herself in a sadly changed Oz, now under the rule of the evil Princess Mombi.

Return to Oz was released in theaters on June 21, 1985. It performed poorly at the box office, grossing 11.1 million dollars in the United States on a 28 million dollar budget. However, it performed well outside the U.S and has since acquired a cult following. It received an Oscar nomination for Best Visual Effects.

The film received mixed reviews. The film critics aggregator Rotten Tomatoes records 52% positive reviews based on 33 reviews, its critical consensus reads: "Return to Oz taps into the darker side of L. Frank Baum's book series with an intermittently dazzling adventure that never quite recaptures the magic of its classic predecessor." Those who were familiar with the Oz books praised its faithfulness to the source material of L. Frank Baum. However, many critics described its tone and overall content as slightly too dark and intense for young children. "Children are sure to be startled by its bleakness," said The New York Times' Janet Maslin. Ian Nathan of Empire Magazine gave the film a three out of five stars, saying: "This is not so much a sequel but an homage and not a good one."

Canadian film critic Jay Scott felt the protagonists were too creepy and weird for viewers to relate or sympathize with: "Dorothy's friends are as weird as her enemies, which is faithful to the original Oz books but turns out not to be a virtue on film, where the eerie has a tendency to remain eerie no matter how often we're told it's not." "It's bleak, creepy, and occasionally terrifying," added Dave Kehr of the Chicago Reader. Amelie Gillette of The A.V. Club frequently refers to its dark nature as unsuitable for its intended audience of young children although it had been one of her favorite movies growing up.
posted by orange swan (11 comments total) 5 users marked this as a favorite
My father read all of the Oz books to my sister and I when we were little and he took us to see Return to Oz when it came out. I think that Siskel and Ebert said that it was too scary for children, but we were upset about the poor depiction of The Gump. I think that Tik-Tok was good, Jack Pumpkinhead was fine and The Gump was a tragedy, but it's been 35 years. After we got a VCR we used to rent Wizard of Oz every year around Christmas, but I'm not sure if I ever saw this one again. I don't remember a whole lot of the movie, but I do remember Dorothy's electroshock therapy in the creepy asylum so maybe Siskel and Ebert weren't that far off.
posted by ActingTheGoat at 11:55 PM on December 18, 2020 [2 favorites]

This is one of my childhood favorites. I rewatched it a couple months ago and I still love it. There's definitely some overacting happening (namely the wheelers) but I still adore the look of this whole thing. The mirrored hall of heads (which must have been difficult to film without getting crew and equipment in the reflections) is still one of my favorite movie sets.

The 80s were chock full of dark children's movies and I guess a lot of adults were apparently put off by that, but I was a child and I LOVED them all.
posted by NotTheRedBaron at 12:04 AM on December 19, 2020 [1 favorite]

Return to Oz is the only directing credit for the great sound designer/editor Walter Murch. But Murch allegedly had a crisis of confidence while helming the feature, so ended up calling on some friends to help him out with the project, which led to Steven Spielberg, Francis Ford Coppola, and George Lucas all coming to his aid. That's some big budget help, especially coming at near the height of their collective fame. Speaking of behind the scenes help, Maurice Sendak is listed on IMDb as providing the initial character design for the movie, which might help explain some of the odd feel as well.

I can completely understand why the movie put some people off. It doesn't feel like most kids films of the time and is something quite different than Judy Garland's Oz, but I was pleasantly surprised by it for being just that, something a bit darker and more strange than most family oriented movies. (Though some of Jim Henson's stuff kinda leaned that way at times, but usually pulled back towards the comfort zone more than Return to Oz did.)
posted by gusottertrout at 2:11 AM on December 19, 2020 [3 favorites]

I love the film.

Treacly sparklemagic cutey-pie fuzzy-wuzzy films of all bright or pastel colors make for dull, lifeless children.
posted by sonascope at 4:46 AM on December 19, 2020 [2 favorites]

I remember that at the time it was released, the complaint was simply…no songs! But now, yeah, perhaps a little too dark. Some of it worked (tik tok), but some didn't (the wheelers). The stop motion effects always looked a little rough and unrealistic. The scene where the doctor is trying to make the electroshock therapy machine less threatening to Dorothy ("See, it has a kind of face.") really sets the tone for the rest of the movie, where basically everything has a face. Fairuza Balk was good as Dorothy.

In recent years, a spat of movies based around the Wizard of Oz were made, all with stories that were cut from whole cloth, which I think is very strange considering Baum wrote stacks of Oz books which are in the public domain. Someone should make a mini-series or something.
posted by jabah at 4:58 AM on December 19, 2020

I do remember Dorothy's electroshock therapy

I had the activity book for this and distinctly remember a colouring page that was just Dorothy's head between two electrode plates.
posted by Alvy Ampersand at 6:54 AM on December 19, 2020 [6 favorites]

One thing this movie never gets enough credit for is deftly combining The Marvelous Land of Oz and Ozma of Oz in a way that fixes the big problem with each (no Dorothy and not actually in Oz, respectively) and keeps all of the best bits in one rollicking story.
posted by DirtyOldTown at 9:44 AM on December 19, 2020 [5 favorites]

I did a mega post a few years back on the various Oz adaptations done for film and television and most of the links still work I think.
posted by DirtyOldTown at 9:48 AM on December 19, 2020 [8 favorites]

My ex-girlfriend had terrible insomnia and every night would put on movie at bedtime with the volume very low and play it on loop until morning. She'd do the same movie for anywhere from a couple weeks to a couple months before moving on to another one, and as a result I have seen Return to Oz in bits and pieces with very little or no sound dozens of times.

Can anyone explain to me why Nurse Wilson is hauled off by the police at the end of the film? Is it just a matter of "bad people go to jail in children's media" or is there an actual crime with which she's being charged? I have wondered about this for a decade now, but not enough to do a dedicated rewatch.
posted by Parasite Unseen at 11:07 AM on December 19, 2020

The movie doesn't specify what Nurse Wilson is being charged with, but it does say that everyone got out of the asylum but the doctor, which means the "damaged patients" got out of the basement, and it seems reasonable to assume that Nurse Wilson would have gotten arrested once the police who came to the scene saw all the patients who had been set free and heard what they had to say about her.

The Gump's head comes from an animal from the Ozian forest, therefore it is a forest Gump.;)

My first watch of this movie happened when I caught it on TV one night when I was 17. It must have been over 20 years before I ever saw it again, but I never forgot it. Who could forget all those heads in their cases screaming, "DOOOOORRRRRRTTTTHHHHHYYYYYY GAAAAAAAAAALE!!!!"? Eventually I ordered a DVD of it online.

Some years back a friend invited me to her place for supper and to watch The Wizard of Oz, and then of course I reciprocated by inviting her to my place for supper and to watch Return to Oz, which she had never seen before, happily assuring her that it was "amazingly fucked up and twisted". But I don't think fucked up and twisted was her bag. She sat and watched it in a polite, bemused silence.

I love this movie, but I recognize that I love it more for its weirdness and darkness and amazing visuals (which are so in keeping with John R. Neill's trippy Art Nouveau illustrations that are my favourite thing about the Oz books), and because I feel it's more true to the spirit of L. Frank Baum's books (which are actually quite dark, violent, and weird) than the treacly Wizard of Oz, than because it really works as a movie. I don't engage with the characters or the story much -- it's simply a spectacle. It certainly isn't a movie for small children, though tweens would probably think it's cool.
posted by orange swan at 10:33 AM on December 20, 2020 [2 favorites] 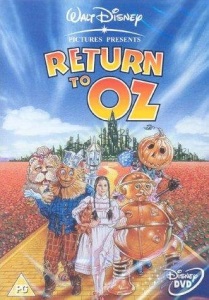