THE SPIRIT OF 99 VIEWING CLUB – A checkout clerk in need of rent money gives drug dealing a try. A Vegas weekend goes awry. A pair of soap opera actors deal with legal and relationship issues. "You know what I like most about Christmas? The surprises."


DID EBERT LIKE IT? Three stars although the review places the film squarely in the shadows of Pulp Fiction:

"Go'' has energy and wit, and the performances are right for the material--especially Sarah Polley, who thinks fast and survives harrowing experiences, and Fichtner, the cop who is so remarkably open to new experiences. The movie is ruthless in its attitude toward the apparently dead or dying, but then grisly indifference is central to the self-centered values without which these characters would have no values at all. Limon shows here, as he did in "Swingers,'' that he has a good eye and can create screwy characters. Can he break out of Q.T. Land?

An impressive 92% on Rotten Tomatoes, with most praising the film's structure and youthful energy. Entertainment Weekly:

In Go, taboos are teasing formalities that the movie smashes through like fences at a stock-car race. Even the story gets smashed, as the movie repeats — or, at least, overlaps — events from different points of view, pausing, after each half hour or so, to rewind the action. Go is a rave-generation joyride, a kind of junior Pulp Fiction that courses along on waves of freedom and excitement. For all that, there's a ticklish intimacy to its tone. Working from John August's script, Liman, who also shot the film, keeps his camera trained on the eyes of his actors, picking up glints of vulnerability as well as bravado. He's interested in not just activity but behavior — the chameleonic, born-to-pretend styles of a new renegade youth-quake whose members have grown up to see life as heightened, virtual, a nonstop show.

THE BEST: The wide eyed stare Ronna delivers as she chugs an underaged beer in front of an undercover cop.

THE WORST: Most of the madcap Vegas antics, especially the car chase

GOODIES:
The trailer, featuring a line from Melissa McCarthy's first screen role
The shooting script
A tour of some shooting locations.

THE SOUNDTRACK:
Len – Steal My Sunshine
No Doubt – New
Natalie Imbruglia – Troubled by the way We Came Together
More info

Unfortunately does not appear to be on subscription streaming services, can be purchased digitally via Amazon, YouTube and iTunes.
posted by yellowbinder (24 comments total) 5 users marked this as a favorite
Go is a rave-generation joyride, a kind of junior Pulp Fiction

For a movie that can be summarized as "Pulp Fiction with ravers", Go is surprisingly good.
posted by Pope Guilty at 11:31 PM on December 17, 2014 [3 favorites]

Go hails from a friendly, appealing alternate universe in which pop entertainment could be fun, clever, and unpretentious.

Also, Sarah Polley is super adorbs. And William Fichtner is indispensable, as always.
posted by Sticherbeast at 2:54 AM on December 18, 2014 [2 favorites]

The legacy of this movie is that I cannot help but yell "IT'S A MIATA!" whenever I'm trying to fit something unwieldy into a trunk.
posted by Etrigan at 4:20 AM on December 18, 2014 [6 favorites]

"I can hear your thoughts."

The cat gives easily the best performance of the movie.
posted by scalefree at 8:44 AM on December 18, 2014 [1 favorite]

I saw this in high school and assumed that's what college life was like.

I was very disappointed.

On the other hand I do like how suffused with Southern California the movie feels.
posted by The Whelk at 8:48 AM on December 18, 2014 [3 favorites]

Go was one of the first DVDs I owned and I forever remember how my review of a movie would be skewed if I watched all of the extra content. I remember seeing the film and thinking it was ok and entertaining but not great, and then I watched like an hour of all the extras, eventually I rewatched the movie with the director's commentary and I learned so much about how hard they tried and got wind of a handful of very subtle jokes I missed on the first viewing (when a guy that later turns out to be gay opens the trunk of his car, the director make sure to make the spare tire was tied into the trunk with raffia ribbon) that I came away from watching it thinking it was a GREAT movie that the studio took the edge off.

After my experiences with Go, I tried to make judgments about a movie after the first immediate viewing and not after watching all the background info.
posted by mathowie at 10:22 AM on December 18, 2014 [3 favorites]

Ok just got around to rewatching despite having planned to post weeks ago!

I love the dark, heady moment when Todd makes Ronna spin for the wire, and the little waddle dance raver dude does when asked to do the same. Interesting that when Adam actually DOES wear a wire it's tucked in his undies so all the stripping and spinning in the world wouldn't find it.

The film tells its stories by character but does not keep us firmly in their perspective. Most films will obviously show scenes that don't feature the protagonist, but Go actually hides a few details that the segment leads experience - the whispered "Go" from Zack to Ronna in Act 1 is not heard until Act 3.

I absolutely love the shrug Todd gives the Miata after Ronna is dumped in the ditch, the same kind of "What the fuck?" gesture you might give anyone behaving badly in traffic. Never mind he had designs on harming or killing her anyway.

The Vegas section is mostly better than I remembered, although Simon's behaviour always exasperates me. Featuring Breckin Meyer acting perhaps the most like a black woman as he ever has. He is one booty shake away from a "You go girl!"

The EW quote I pulled really is spot on in mentioning the brief moments of awkwardness and vulnerability. Fitchner strips and invites Mohr to feel a towel or blanket, but it's too low to touch comfortably, so Mohr has to do this really awkward bend down to feel it on the bed while keeping his eye on the unpredictable policeman.

Also one of my first DVDs, and though I've watched it many times over the year, pulling out the yellow and blue Santa covered disc this time definitely gave me flashbacks to when I bought it, when I was young and the world was wide open and fun and uncaring and scary, just as it appears in the film.
posted by yellowbinder at 10:43 AM on December 18, 2014 [1 favorite]

I don't remember this movie at all! I guess I was up to other things... this is a great post, yellowbinder and I shall check this out.
posted by joseph conrad is fully awesome at 12:37 PM on December 18, 2014

I still love the reaction the roommate has when both the guys her roommate has been sleeping with show up together and she like bursts out laughing.
posted by The Whelk at 12:39 PM on December 18, 2014

I still love the reaction the roommate has when both the guys her roommate has been sleeping with show up together and she like bursts out laughing.

The legacy of this movie is that I cannot help but yell "IT'S A MIATA!" whenever I'm trying to fit something unwieldy into a trunk.

As half of a gay twentysomething couple who owned a Miata when that movie came out, this basically felt like the most autobiographical thing I had ever seen in a movie. (We had already rolled our eyes at each other before they even attempted to load the trunk.)
posted by MCMikeNamara at 12:54 PM on December 18, 2014 [1 favorite]

The writer of Go later went on to have the cushiest job imaginationable for s screenwriter
posted by The Whelk at 1:04 PM on December 18, 2014

Holy shit that trailer is terrible! I'm so glad I did not see that before watching this film.

To this day, whenever I see the Columbia Pictures logo and music in front of a film, I can't help hearing the music from the intro to Go in my head. I can't decide if it's a blessing or a curse.

This was my intro to Timothy Olyphant, who I remember being suitably menacing, but who was able to display a pretty impressive range. I'm not sure how much of it was the writing, but he played one of my favourite characters.

This was my intro to Timothy Olyphant, who I remember being suitably menacing, but who was able to display a pretty impressive range.

Oh, shit, that's right. I remember watching the first episode of Justified and suddenly remembering he was in Go like a million years ago and what the hell happened to him in the meantime, because he's awesome?
posted by Etrigan at 4:36 PM on December 18, 2014 [1 favorite]

If you haven't seen Deadwood yet, then I'm supremely jealous that you have that ahead of you.
posted by ODiV at 4:39 PM on December 18, 2014 [4 favorites]

I didn't have HBO back then. I keep meaning to check it out on Amazon, but there's so much other stuff to get through...
posted by Etrigan at 4:41 PM on December 18, 2014

These sort of quirky, larger than life crime movies where everyone talks a lot were basically the superhero movies of the late '90s, weren't they? Everyone was doing them (I wrote a probably terrible screenplay in 1998 that followed this formula, and still am not sure how I missed the boat on the inevitable fame and fortune that should have resulted in; I guess that it would have helped to sell it or whatever). I remember thinking this one was really fun, or at least the parts with Sarah Polley were. Everything's better with Sarah Polley.
posted by kittens for breakfast at 8:30 AM on December 21, 2014 [2 favorites]

I think they where closer to zombie flicks or slasher revivals in that a quirky crime movie is *relatively easy to produce* and doesn't need name actors or lavish budget. Genre stuff happens in waves and your biggest asset is still a really small budget you can make back quickly ( see the horror genre from the beginning of time)
posted by The Whelk at 9:34 AM on December 21, 2014 [2 favorites]

I don't remember much about this (like Matt, I saw this on DVD early on) but I do remember finding Ronna's post-drug-deal advice to the ravers she's scamming absolutely hilarious.
posted by infinitewindow at 4:48 PM on December 21, 2014

It's pretty interesting to try to see the narrative of this movie from Todd's perspective. We see it through many other people's perspective, but when you think about how experiences it, you realize it can also be told as one guy having all these really bizarre things happen around him.

One other funny thing is that Fitchner reminds me a lot of the actor who plays Zed in "Pulp Fiction". The parallels between the two movies have already been mentioned. But I always wonder if, when the cop suddenly appears in his underwear, we're meant to wonder if things are about to go in a Zed-like direction.

For an interesting counterpoint, check out Human Traffic, a UK film (starring not-yet-the-Master John Simm) about friends going to a rave. That basic description and the year of release is about all it has in common, but it's a good watch.
posted by phearlez at 12:06 PM on December 23, 2014 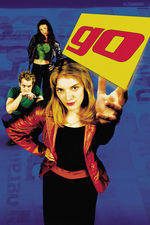