After 19 years of playing the game he's loved his whole life, Detroit Tigers pitcher Billy Chapel has to decide if he's going to risk everything and put everything out there.


Forty-year-old pitcher Billy Chapel (Kevin Costner) is practically a dinosaur by professional baseball standards, fast approaching the end of his career. But, as Chapel stands on the mound pitching the game of his life, his thoughts don't turn to his prized history in sports, but rather return again and again to his tumultuous relationship with Jane Aubrey (Kelly Preston), a single mom who has stood at his side through the good and the bad but is now on the verge of leaving him.

Betty Jo Tucker:Everyone knows Kevin Costner plays at playing baseball better than any other actor (except for the late Gary Cooper in Pride of the Yankees). After all, he proved his affinity for the game beyond a shadow of a doubt in Bull Durham and Field of Dreams. Now, instead of quitting while he’s way ahead, Costner takes on For Love of the Game, a melodramatic film version of Michael Shaara’s novel.

Keith Phipps:It's a promising setup for a movie that continually lets it down. Raimi throws all his good stuff into Love's game scenes, and though the outcome of these sequences is the very definition of the word "overdetermined," he still makes them exciting. (Still, Raimi's not above throwing in sepia-toned flashbacks to scenes of Costner playing ball with his father as a child.) Elsewhere, For Love Of The Game seems lost, as one overlong melodramatic interlude follows another, each more predictable than the entirely predictable game itself. Nearly every scene not set in a ballpark is dull and badly handled, the stuff of standard romantic drama at its least inspired.

Roger Ebert:You know those quizzes they run in women's magazines, about testing your relationship? "For Love of the Game" is about the kinds of people who give the wrong answers. It's the most lugubrious and soppy love story in many a moon, a step backward for director Sam Raimi after "A Simple Plan," and yet another movie in which Kevin Costner plays a character who has all the right window dressing but is neither juicy nor interesting. . . .

The ending is routine: false crisis, false dawn, real crisis, real dawn. Only a logician would wonder why two people meet in a place where neither one would have the slightest reason to be. Thinking back through the movie, I cannot recall a single thing either character said that was worth hearing in its own right, apart from the requirements of the plot. No, wait: He asks her, "What if my face was all scraped off and I was basically disfigured and had no arms and legs and no [something else, can't read my handwriting]. Would you still love me?" And she replies, "No. But we could still be friends."

If this movie had ended with the Kevin Costner character back at the hotel after the game, alone, having pitched the game of his life, but having no life outside of the Game, I could have handled everything that led up to that moment, with all the relationship drama. But then they gave Billy Chapel an out. And the movie became total, irredeemable BS.
posted by Fukiyama at 10:09 AM on February 16, 2021 [1 favorite]

Wow . . . I hadn't thought of that as a possibility despite having just seen this for the first time, and yeah that would have made things a lot different. Instead I sorta walked away thinking ok he was mono-maniacally devoted to baseball for 19 years, now is he gonna be the same way to Jane? Because that seems like a lot.
posted by Carillon at 7:24 PM on February 17, 2021

This is a weird one, as it has some of the very best baseball action scenes I have ever seen as well as an insufferable amount of flashbacks and cutaways to the romantic life of this one, not-such-a-great-person rich dude. I really like the idea of focusing on a single game, though. I just wish it hadn't had so many digressions.
posted by DirtyOldTown at 12:18 PM on October 18, 2021 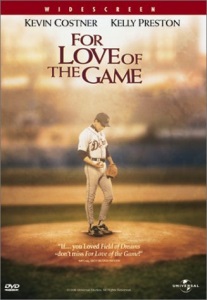