Convenience Store Woman, Sayaka Murata's first novel to be translated from Japanese to English, received glowing reviews for its portrayal of a woman who rejects the values of her family-oriented social class and finds her niche working in a convenience store. Now comes Earthlings. As one reviewer puts it:" The two books might be seen as siblings, though Earthlings would definitely be the evil twin."


Earthlings contains much more difficult material, including sexual abuse, murder and cannibalism. The Guardian review, linked above, is one of the few to explicitly note the likelihood that some of the events, especially near the end of the book, do not actually happen. The Kirkus review calls the book "Simultaneously too much and not enough" and comments: "[H]ere, [Murata] writes without subtlety or depth. Shocking scenes follow one after the other in a way that ultimately feels more pornographic than enlightening."

But as Stephanie Hayes argues in The Atlantic: "Again and again, Murata frustrates our desire to make judgments or find meaning based on accepted norms. If the book’s ending feels unreal and unsatisfying, perhaps Murata has succeeded in her experiment—and we were her subjects all along." And as Lydia Millet puts it in an extremely detailed (and spoiler-filled) review: " The strength of her voice lies in the faux-naïf lens through which she filters her dark view of humankind: We earthlings are sad, truncated bots, shuffling through the world in a dream of confusion." 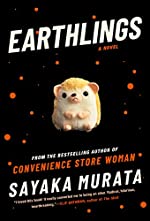