Anyone else in the mood for a tightly-written disaster novel that's more interested in people's responses to an emergency than in the emergency itself? Rumaan Alam's Leave the World Behind is a dread-packed piece about two families forced to hunker down together during an uncertain, unsettling period of world-altering events. It was a finalist in the National Book Awards 2020 for Fiction, and is Alam's third novel.


The New Yorker: "“Leave the World Behind” is a coy little thing: a disaster novel without the disaster. Amanda, an advertising account director; her husband, Clay, a tenured professor and book critic; and their two kids, fifteen-year-old Archie and thirteen-year-old Rosie, have rented an Airbnb among the raspberry fields of rural Long Island. The house is “old but new . . . solid but light,” with a white picket fence, and made of brick, “the very material the smartest little piggy chose because it would keep him safest.” Soon after the novel begins, the family has finished up a long day at the beach, and a late-night knock on the door yanks them out of their reverie. It’s the house’s owners, George, or “G.H.,” and Ruth Washington, who bring news of a blackout across Manhattan—though they think the outage might have spread farther. The two families reluctantly hunker down in the home, which still has power. Soon more disturbing news arrives, the way it so often does—via Times push notifications. There are vague headlines about the blackout hitting the whole East Coast and a hurricane making landfall. On her phone, Amanda sees “a final ‘Breaking’ followed by nonsensical letters.” Then the Internet blinks out. What is happening?"

The Guardian: Leave the World Behind by Rumaan Alam review – breathtaking and prescient

Rolling Stone: Rumaan Alam’s ‘Leave the World Behind’ Captures the Universal Horror of the Apocalypse (Interview with the author)
posted by MonkeyToes (11 comments total) 4 users marked this as a favorite
Oooh, this sounds exactly like something I'd like. There's a wait on the library copies but I'll read it.
posted by cocoagirl at 10:10 AM on March 26, 2021

Can someone MeMail me and spoil the ending please -- or at least indicate whether there is one?

I can't take a lot of suspense any more, but the reviews make the atmosphere of this sounds really good!
posted by wenestvedt at 1:17 PM on March 26, 2021

I didn't love this book, but I also haven't been able to stop thinking about it since I read it. And while I was reading it, I was completely engrossed in the experience, especially because one of my favorite voice actors reads it, Marin Ireland. It was legitimately scary, or at least filled with enough dread that I was scared. The interruptions from the omniscient narrator were really effective for me.

Yes, Clay and Amanda drove me crazy for much of the book, but by the end, I desperately wanted their family and the Washingtons to stay together. The horror of their first meeting and the racial dynamics underneath it payoff in a sense that way.

One nitpick that drove me insane: does any character try to listen to their car radio? Did I just miss that?
posted by gladly at 1:36 PM on March 26, 2021

I didn't love this book, but I also haven't been able to stop thinking about it since I read it.

Agreed. It's not in the business of being lovable--but I respect what I read, especially because of its feinting. I was ready for it to go one way, and then it went somewhere else that was darker, more worrisome, and more interesting. I'm going to be thinking about this one for a while. The mounting dread was just so well done, and the omniscient narrator hinting about off-stage/future events was *chef's kiss.* Gladly, I think it's very early on that Amanda turns down the radio because she's taking a call, but now that you mention it, I'm not sure anybody tries radio (and I was half-expecting G.H. to pull out a meticulously preserved shortwave. I mean, he has preps; that was an omission on his part).
posted by MonkeyToes at 4:59 PM on March 26, 2021 [1 favorite]

I read this immediately after I read Bird Box and they really pair well together.
This novel was crafted so well...I don’t usually enjoy this type of plot but I was really drawn in. I want to read more by this author.
posted by bookmammal at 5:44 PM on March 26, 2021

Ah, should have known—Ruth tries the radio and hears nothing but “This is the emergency broadcast system.”
posted by MonkeyToes at 7:00 PM on March 26, 2021 [1 favorite]

I could not put this book down. I kept giving my husband updates as to what was happening. I can't wait for the movie.
posted by armacy at 6:36 AM on March 27, 2021

I didn't want to leave this moment too early in the thread, but what has stuck with me the longest has been the flamingos. Beautiful, eerie, and strange.
posted by gladly at 10:04 AM on March 27, 2021 [3 favorites]

I liked this. In many ways I thought the first half was the best half. Not that I didn't like the last half, but I really enjoyed the slow setup. I think it made the actual event more horrible, knowing that something was going to happen but knowing that the characters were just going about their lives with no idea.

One thing that impressed me was how well the author was able to conjure up clear images for me: the Washingtons' house, the surrounding countryside, the woods nearby. The cinematic quality of the description makes me look forward to the screen adaptation.

gladly, I listened to the audiobook as well, and I agree with you, the narrator was excellent.
posted by hurdy gurdy girl at 2:21 PM on March 27, 2021

Just finished it last night, and really did like it. It read like a variation of the film Caché, which also frustrated and used that frustration. The omniscient narrator scratched just the right amount of itch about what had/was/will happen. The narrator was neither malevolent nor treated humans as exceptional, which felt like it kept the suspense and despair tuned just right. And the characters were kept just out of reach in an interesting way. Enough to be skeptical of their various agendas but close enough for me to care about, with a lot of teasing here and there about what was going on through the characters themselves.

But. What do we all think happened? My thoughts lead me toward a meteoric EMP or a switch in the earth's polarity, with subsequent blind responses (aggressive, defensive, chaotic) by various governments that seal the deal. The narration also alludes that the earth has some agency in what's happening. Did others get that vibe?
posted by cocoagirl at 6:25 AM on April 10, 2021 [2 favorites]

That is really interesting, cocoagirl! None of those things occurred to me, but I find them all very plausible now that you mention them. I really had no idea what the original event could have been, but it seemed like whatever had happened triggered an aggressive response from various governments that made things worse.

The idea that they had all been responding to a natural, earth-originating event, is even better.
posted by hurdy gurdy girl at 4:35 PM on April 11, 2021 [1 favorite] 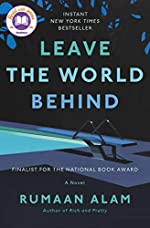